Freshman provides feedback on Freshman Advisory: The Benefits & the Downfalls 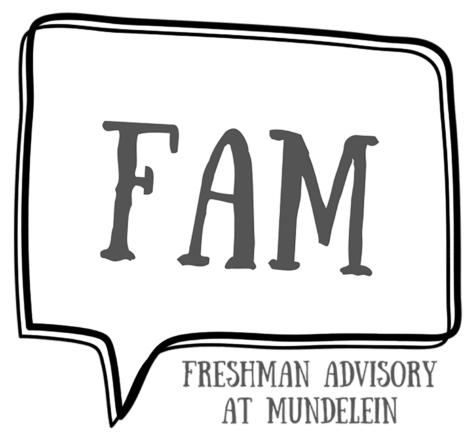 Freshman year is a lot to take in for new high school students, as the jump from middle school to high school comes with many challenges, academically and socially. Navigating a new school and a new routine as well as getting to know staff and fellow peers can be overwhelming for incoming freshmen, and FAM (Freshman Advisory at Mundelein) set out to make the transition easier.

The new program began this year with the class of 2022 and aimed to introduce students to resources offered at the school while also encouraging students to get involved in various activities. Despite the good intentions of the program, it has a few downfalls that should be improved for future students.

During first semester, the advisories took place every Monday and Tuesday during the first half of every lunch period, and for second semester, the frequency of meetings was decreased to Mondays only. A typical session included a slide or two of announcements about upcoming events and extracurriculars, and in the beginning of the year, the FAM mentors conducted some tours around the school. This was a helpful resource for the majority of students who were unfamiliar with the school, but some people found the announcements aspect redundant, as many students know upperclassmen who filled them in on the upcoming events already or are a part of clubs and sports, which already told them about these announcements.

The advisories also had a large emphasis on team-building and meeting those in the advisory, which wasn’t very popular with students who didn’t see each other or talk to each other otherwise outside of the advisory period.

“I don’t really relate to a lot of the people in my freshman advisory class, and that’s why I’m not friends with them, and it felt like they were forcing it on us– that we all had to get to know each other,” freshman Saedy Kugler said.

Additionally, as the weeks went by, the content of the sessions no longer were long enough to fill the allotted time either. This created empty minutes where students could work on homework but were typically used instead to hang out or wait to go to lunch.

“I feel like [FAM] has a good meaning, and they’re trying to do good things, but really all we do is sit around and do nothing,” freshman Aaron Anastos said.

This particular situation was an obstacle for me, as I have electives for my first three periods that I rarely have homework for, so I would have nothing to do during this free time other than wait to go to lunch.

Because of these negative aspects to the new program, there are some improvements that students have recommended. For example, many would like to see shorter meetings. Others have suggested only having freshman advisory for the first semester or even just the first six weeks.

Making the content of the freshman advisory program more concise by fitting it into a tighter schedule would save time for staff and students while making a larger impact on students right at the start of their high school career when they need it most.

Despite all of the issues that come with the introduction of a brand new program, there is a place for FAM, but the execution of the program saw some flaws that can be fixed. With changes to programming and scheduling as well as improved collaboration between students and staff, the program can only continue to get better for future freshmen.

Why does freshman year support matter?

Jessica Herrmann, the system of support coordinator who helped create the freshman advisory concept, shares her views on the benefit of a solid first year of high school.

“There’s a lot of research around the importance of freshman year, specifically that if students fail a course freshman year, they’re a lot less likely to graduate on time,” she said.

Herrmann also said research has shown that there is a strong correlation between being involved in school and student success.

Based on these findings, the freshman advisory creators set out to make ninth grade a more successful experience for all students.

Herrmann said the first year of the program has been a learning process, and she said she looks to have more initial assemblies and tours in the future, making meetings less focused on team-building.

She also mentioned scheduling the program has also proven to be rather complicated logistically with so many lunch periods and with finding the time and space to bring all the students together.

However, Herrmann added that while students may not see the good in freshman advisory now, it will prove beneficial in the long term.

“When you’re in the moment, sometimes it’s hard to see how something might be impacting you,” she said. “For example I think it’s possible that students are joining clubs, joining activities, aware of information that they wouldn’t have known without FAM. They don’t necessarily know that because they’ve never experienced both [FAM and not having FAM].”