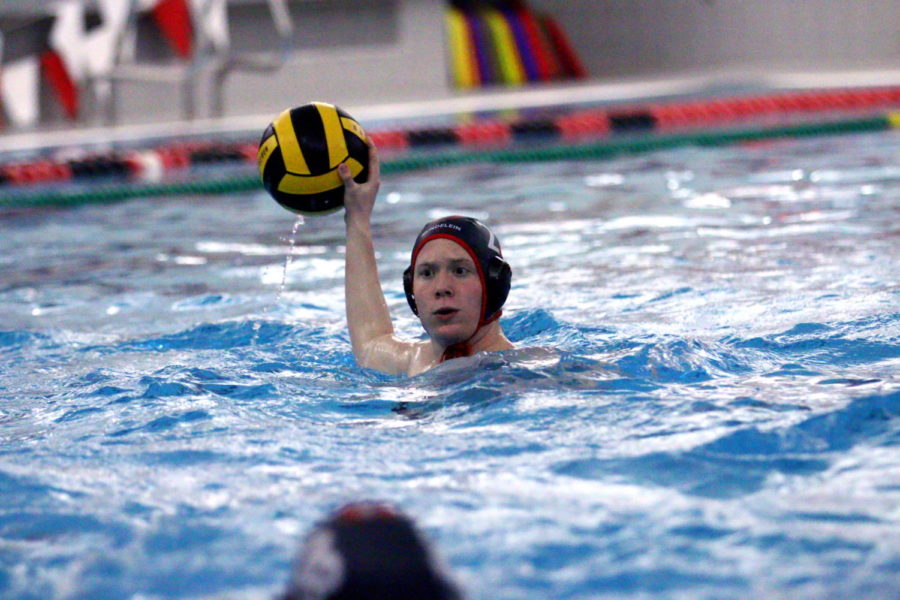 The state championship title is a force of motivation this season as the boys water polo team turns its efforts toward the state competition with a current sixth-in-state ranking.

“As a team, I think we have a goal to finally make it to the state tournament, the final eight teams in the state, and try our best there and see if we can win,” Matthew Allore, senior, said.

Before Spring Break, the boys team held an 11-1 record. This record included the team’s first tournament win in about ten years when the team took the title at the Palatine High School invite during the weekend of Friday, March 15.

A large part of the success the boys water polo program has seen this season has been because of the senior-heavy team. With 13 players, nine of them are seniors, so the team is loaded with all their starters, minus one, from last year as well as an impressive group of juniors and underclassmen.

“We have that experience; we’ve played in some big games and some big tournaments, so we kind of know what to expect,” Hunter Magee, senior, said.

With four senior captains, Allore, Magee, Logan Bradshaw and Jake Garcia, the captains are hoping their leadership will help guide the team this season.

“Being a captain this year, we really just have watch on keeping everyone on track because there are times since we are so bonded that people will skew off track or get unfocused and just mess around, so as a captain, we’ll have to step in and be like, ‘Come on, guys; we’re here to win’,” Garcia said.

Besides the overall team dynamic, the chemistry among the captains is important, too, as it factors in to the captains’ abilities to lead as a unit, but the captains said the four of them are close and able to lead the team effectively.

“The other captains…are all really awesome guys, and they all contribute their own specific things to the team,” Bradshaw said. “We all work pretty well together, and we’re all pretty good friends, so it works out pretty well.”

of the team as one way to improve the team.

“We even recently just had a team sleepover where someone hosted the entire varsity team, and we all just slept over at their house, and we stayed up until like three in the morning with each other, so it was just a really fun time,” Garcia said. “So, I think like with that, it’s so much easier to trust your teammates because you trust them outside of the water, too.”

There is also a change in team mindset and dynamic this year with a renewed focus on the goal of going to state with a strong team bond.

“We have a very talented and spirited team, and we’re all focused on our goals pretty well,” Bradshaw said.  “Last year, our team, we all worked together very well; however, I believe there wasn’t a common focus on one goal. It was just everybody wanted to do well, but it was almost individual in a couple ways. But, this year, everyone is very united under one common banner.”

The captains also formulate an overall plan each week as a way to guide the other players.

“We get together with our coach and have captains’ meetings and decide basically where the team’s at based on how we’ve been performing, what we need to do in practices, or even outside of the water, to become a closer team and a better team.”

These four seniors have formed a tight knit group as captains of the boys varsity water polo team, and their level of experience and dedication are helping to drive the team to a state title for their final season.