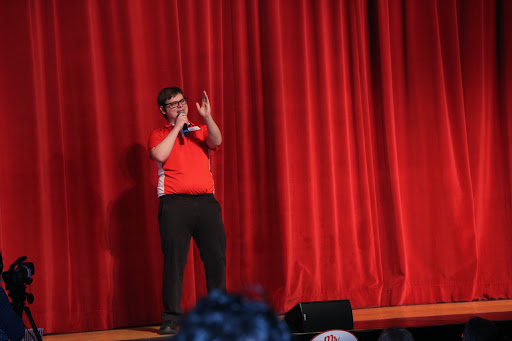 With many years of stand-up comedy experience, Cumberland decided to stun the judges with his abilities to make the audience laugh. Deciding to do stand-up comedy for the talent portion of the competition led to Cumberland making the Top 5 finalists.

Since the early 2000s, MHS has hosted a male beauty-like pageant called Mr. Mustang for boys of the senior class, and the tradition continued for the boys in the Class of 2019.

The crown went to Jake Cumberland who took the title of Mr. Mustang 2019.

“[Participating in Mr. Mustang] was a surprisingly large time commitment; however, I’d say it was almost always an enjoyable time,” Cumberland said. “It was just a bunch of guys joking around, which made for a few very entertaining and energetic experiences.”

As a show choir performer, Cumberland impressed the judges with his abilities to bring laughter to the audience.

“Jake is the whole package. During each portion of the competition, he stood out as one of the front-runners,” said Elizabeth Willis, English Teacher and Mr. Mustang judge. “Jake has such a great personality, and you could tell that he was having a blast every time he was on the stage.”

To start off the night, Cumberland walked out in his violet vest with his Miss Mundelein escort Kimberly Barr, senior. He entered the stage with confidence.

“Jake is such a fun person to be around,” Barr said. “Once you get to know him, he’s super funny.”

Cumberland started off with his first performance with the “Thank you, parents” video and then his freestyle dance with Barr.

Their dance performance stunned the judges, but the judges’ first impression of Cumberland was his smile.

“His energy was contagious, and I think that is what Mr. Mustang is really about,” Willis said.

For his second performance, Cumberland competed in the talent competition with his risky but smart stand-up comedy routine.

His routine drew on his experiences as an employee at the Mundelein Jewel Osco.

“I felt like the stand-up was the best performance and the most relatable to the audience over my speech,” Cumberland said. “I also felt like the comedic ad-lib in that performance was far more humorous than anything I’ve done before.”

At the time for the announcements of the Top 5 contestants, Cumberland was satisfied with his recent performances and was hoping for the best outcome when his name was called.

“I know Jake is always willing to help others and be there for people, which makes him a perfect Mr. Mustang!” Barr said.

Then, the Q&A portion came. Cumberland was provided with a question that allowed him to give an inspirational and memorable response. His answer started out with an explanation of his struggle with low self-esteem, but it ended with confidence because of how MHS has had an impact on him in ways he will never forget.

“I’ll try to keep a good example, be kind to everyone, get stuff in on time and give it my all. It’s a little too close to the end of the year to do something big, so I feel like doing all the small stuff I can will make a difference,” Cumberland said.

By the time all the performances and the contestants presented themselves to the audience, it was time for the winner to be announced. Cumberland was calm and collected, waiting hopefully for his name to be called.

“I think Jake represents the entire student body. He is smart and funny, humble, yet truly talented,” Willis said. “I think just about every person can relate to Jake in one way or another. You can tell that Jake has embraced his role as a student at MHS, and I think he is an excellent example.”

At the end of the night, Cumberland was crowned Mr. Mustang 2019 by his own escort who is the current Miss Mundelein. Mateusz Brak was named first runner up and Luigi Maligaya was named second runner-up.

These final results led Cumberland to this final reflection about his school:

“I think I’ll see MHS as more of a place where anyone can thrive, no matter what background you really come from,” he said. “You don’t have to be super popular to be successful here; you just have to give it your all.”