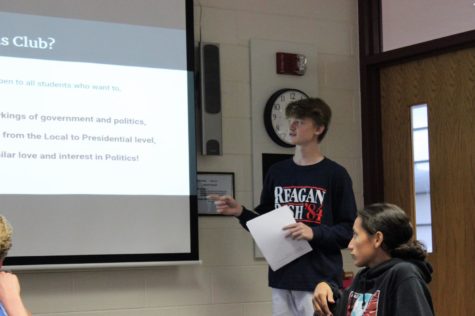 While political clubs are common in high schools, Political Actions Club aims to move away from the traditional partisan-based clubs to one that helps its members better understand the political climate at the moment in a non-partisan way.

“PAC is more of a club to get people to understand politics and government,” said Student President Ilya Vynnyk, junior.

PAC has been in the works for a year now and is in its first pilot year this year.

“[It’s] a group that really is suited toward empowering students who are below the voting age,” Andrew Hood, faculty sponsor, said.

Hood added that he hopes, with this club, students will learn to utilize their community and try to be more politically active and informed.

In addition to teaching the many aspects of politics, Vynnyk said PAC’s goal includes supporting students by “giving [them] a chance to work on a presidential campaign.”

State and local campaigns will be a choice, too, and PAC members also plan to connect students with prominent politicians in the area.

“We’d like to bring in state and local elected officials,” said Hood, to give students a chance to interact with government officials and learn what it’s like to be a candidate or a representative.

Another goal of PAC will be to inform all students, not just members of the club, about how to get their news.

“People might read the news once for a class and not really understand what the news is talking about,” Vynnyk said.

He urges those who are considering PAC to join because “if you’re just trying to learn about politics and government, this club will help you do that.”

Members added the club will also be a good study resource for classes like AP or regular-level government.

Junior Thomas Urban joined the club specifically for that reason.

“I’m currently taking AP government and comparative, so it may help me in the class, and I’d like to get more information on the political scene,” Urban said.

PAC leadership further plans to offer its members different perspectives on the current events of the time as well as options on how to become a student leader in the school and community.

Hood said it will be great to “see what changes we can inspire as students.”