Mundelein Took to the Skies: Lasting Impact of Aviation Program 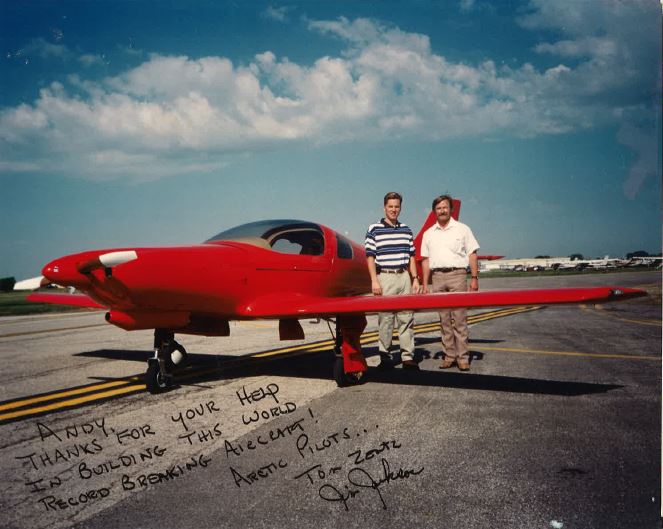 Vocational Education Teacher James Jackson and Tom Zentz (Class of 1988) stand in front of the record-breaking Lancair 360, which flew to the Arctic Circle and back in 1995. This particular picture was addressed to Andrew Zimmermann (Class of 1991), who helped build its ailerons.

In 1980, Vocational Education Teacher James Jackson brought the world of aviation to Mundelein students and, with it, opportunities in a field previously not accessible to high schools. As the first of its kind, the program had a lasting impact on the people involved and has become a highlight of the school’s history, winning several awards and setting records.

It all began when Jackson learned that a student in his woodshop class was building an airplane at home with his father. Jackson had always wanted to fly but didn’t have the resources to do so in the past, so he began to dig into the world of aviation.

“With [the student’s] help, I developed an idea, and I built a plane at home over the years,” Jackson said. “[When] I was still teaching the shop program and after building the plane and learning to fly, I thought this might be a great idea in education.”

Despite the lack of funding and an already-established curriculum mixed with a multitude of risks, the program was created to offer a hands-on approach to learning.

“The program allowed students to see education in action,” said former student Andrew Zimmermann (Class of 1991), who worked on the ailerons–the flaps of the wings– of the Lancair 360, the third plane built through the program. “Instead of solving problems on paper or on a chalkboard, we got to hold problems and challenges in our hands and see with our eyes the changes.”

To help fund the program, Jackson brought in outside sponsors and created a curriculum from scratch to support the unprecedented program.

In a brochure about the Aviation Education Programs at MHS, it stated, “The aviation curriculum is the only one in the country that includes building real aircraft that will fly.”

Over the years, more students got involved, and the program grew from being just one class a week to a class that ran for six periods a day. The curriculum shadowed programs found at several colleges, and college credit was given to those who completed the course and continued on to pursue aviation.

“An articulation agreement with Lewis University and Southern Illinois University allows students to earn up to 12 hours of college credit while in high school,” the brochure stated.

Jackson’s innovative teaching style allowed for students to think outside the box and attempt different techniques to complete tasks. The program allowed for creative freedom while simultaneously teaching the importance of safety.

“Mr. Jackson was very supportive but also very careful,” Zimmerman said.  “Lives are on the line when the plane flies.  While building, we have one chance to get it right.”

The community also got to participate in the program, too, with open shop hours in the evenings, so community members could try their hand at building planes.

Over the course of his teaching career, Jackson received several honors. He was inducted into the National Teachers Hall of Fame in 1993 and had the opportunity to visit the White House where he met the president at the time–President Bill Clinton. He also received awards from the Experimental Aircraft Association and from the Federal Aviation Administration.

The aviation program itself had many achievements of its own; its planes were exhibited at the EAA’s convention in Oshkosh, Wisc.

One of the program’s brochures even stated, “Over 1,000 students have completed this program with over 300 students continuing in aviation-related fields.”

After Zimmermann’s time in the program, for example, he continued in the equipment industry, got his pilot’s license and built his own airplane.

Zimmermann said he “felt like the counselors of the day only wanted doctors and lawyers,” but the program led him to a career path he most wanted to pursue.

In 1995, Jackson and former student Tom Zentz (Class of 1988) flew the program’s third plane, the Lancair 360, to the Arctic Circle and back. The journey took eight days to complete, flying at about 250 mph. This flight set a world record and was the subject of an article by National Geographic in June 1995.

“To fly 8,000 miles to the Arctic Ocean of the north and back is a real testament of success, and it will probably never be duplicated again,” Jackson said.

The program opened up a world of new possibilities for MHS students and proved that with hard work and a shared goal, high school students could achieve so much more than they originally thought possible.

Jackson said, “It was authentic assessment in its purest form because it was hands-on, and the proof of the pudding was actually [that] everything worked because someone’s life was at stake.”

While the program ended in the early 2000s, the last remnants of the program can still be found on the garage door window outside of Weight Room One. There, one can find a blue sticker with the EAA logo on it, which marks the location where planes were once built.