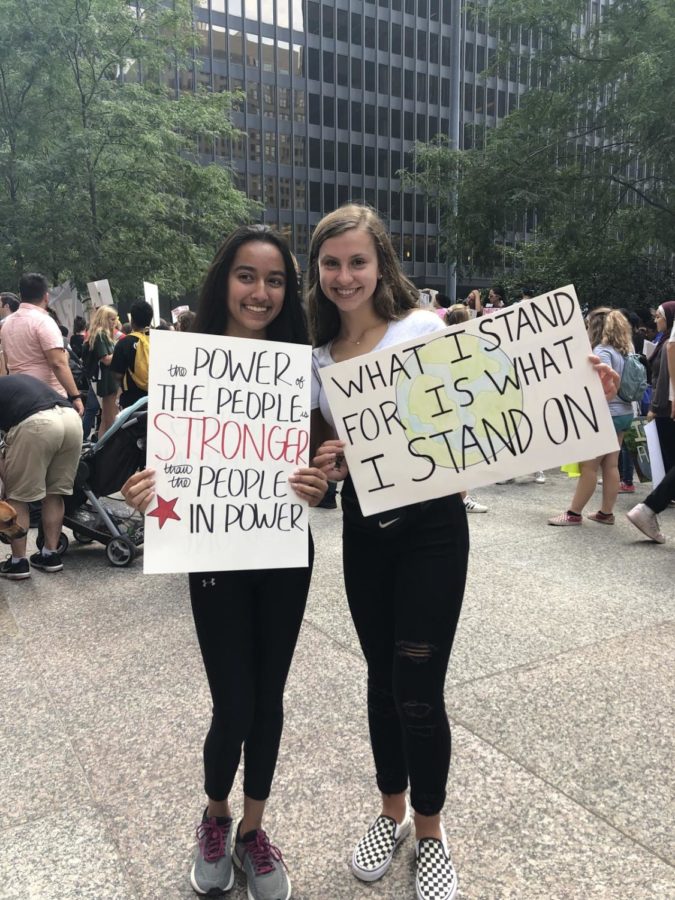 Junior Emily Scaglione (right) from Palatine High School holds a sign during a climate change protest that occurred in Chicago this fall.

The five-year period between 2014-2019 was reported by the World Meteorological Organization to be the hottest on record, and this uptick in global temperatures has had and will continue to have an impact on humanitarian efforts, the economy and the weather patterns.

The last few months have shed light on issues related to global warming with climate strikes staged around the world and the United Nations Climate Action Summit on Sept. 23 in New York. The summit sought to respond to the lack of progress toward environmental goals set in place by the Paris Agreement, signed in 2016 as a framework plan to deal with a rise in emissions of greenhouse gases.

United Nations Secretary-General António Guterres said the following at the summit: “The climate emergency is a race we are losing, but it is a race we can win.”

Lack of urgent action is the key factor cited by many involved in climate-related protests and is underscored by activists, such as Greta Thunberg, a Swedish 16-year-old who has been a primary catalyst for climate movements worldwide.

“Right now, we are the ones who are making a difference. If no one else will take action, then

we will,” said Thunberg during a tour of the U.S prior to attending the summit.

Organizers of the climate protests estimated that more than four million people joined in on protests all over the world, as reported by the New York Times in “Protesting Climate Change, Young People Take to Streets” by Somini Sengupta on Sept. 20, with high turnouts in Berlin, Melbourne and London– each city saw around 100,000 protesters. Smaller scale protests and walkouts were common, and the people of Chicago got in on the movement, too.

Emily Scaglione, a junior at Palatine High School, attended the Chicago Youth Climate Strike in Grant Park with a friend of hers and a parent on Sept. 20.

“Overall, the event was very inspiring, to say the least,” Scaglione said. “It was incredible to see thousands of young people gather and fight for our future in such a direct way. It was empowering to know that we were able to participate in something as powerful as that as well as something with that level of maturity.”

The Sept. 20 article “Students march to Loop for international Climate Strike rally; events held around globe, throughout Chicago area” written by Elaine Chen of the Chicago Tribune reported that Chicago Public Schools excused students to attend these rallies as long as they returned to school after the event while the public school district in New York excused full day absences.

“If you look at the event in retrospect, you are sacrificing one day of school to fight for your whole future,” Scaglione said.

Youth and student involvement have been a large part of the climate movement, as the subject pertains greatly to younger people who see the movement as a step to a brighter future.

“There are many protests that students participate in so that we could be given a better future, instead of taking the one that we are being given by this previous generation,” Chris Nacion, sophomore, said.

All these demonstrations led up to the UN Climate Action Summit in order to keep nations accountable toward their goal established in the Paris Agreement– to keep earth’s climate from rising more than 1.5 degrees Celsius to steer clear of irreversible damage to earth’s ecology.

“Governments are here [at the summit] to show [summit attendees] are serious about enhancing Nationally Determined Contributions under the Paris Agreement,” Guterres said. “Cities and businesses are here showing what leadership looks like, investing in a green future. Financial actors are here to scale-up action and deploy resources in fundamentally new and meaningful ways. Coalitions are here with partnerships and initiatives to move us closer to a resilient, carbon-neutral world by 2050.”

Guterres made it clear at the summit that he wanted to see action, not just discussion, and some concrete agreements were made, with 65 countries committing to plans to achieve net zero CO2 emissions by 2050 and several updating pre-determined policies from the Paris Agreement to reduce emissions by 45 percent by 2030.

Also prioritized was the move away from coal power with 30 countries, 22 states or regions and 31 corporations committing to halting the building of more coal power plants from 2020 forward.

“We shouldn’t be debating whether or not taking action is economically sound, but whether these policies introduced will be enough to save us from an impending doom that has been predicted for nearly fifty years,” Nicole Nowicki, senior, said.

The United Nations also committed to monitor the plans and initiatives discussed at the summit in order to ensure progress is being made toward their objectives, especially given the pressure from activists and youth alike.

Nowicki said, “[These protests have] finally given the youth a platform and made them feel as though they actually had a say, which can hopefully carry on towards the future and create a generation more mindful of the world around them.”