From high numbers to a hot gym: Student Leadership reflects on homecoming dance 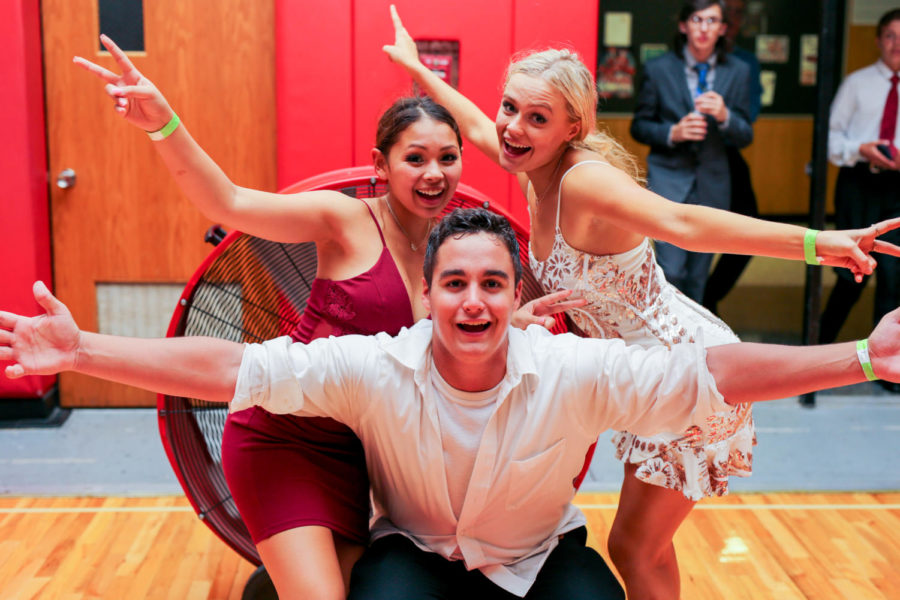 Seniors Jessica Nayden, Sarah Parduhn and Anthony Heelan pose in front of a fan after taking a break from dancing at this year’s homecoming dance.

On Sept. 21, MHS hosted a “Dancing through the Decades” themed homecoming dance, which had almost 250 more students in attendance than the past couple of years. Past homecoming dances have drawn between 850-950 students.

“Ultimately, the record [of attendance] since I’ve run [the homecoming dance] has been 1,200. This year we were at a little over a thousand, which is an increase [over the past couple of years],” Student Leadership Adviser Patrick Gaughan said.

One reason for these high numbers was the result of taking ticket sales at the door– the first year Student Leadership has done that.

“We are trying to make all of our events more accessible to students so that if they want to go, they are able to,” Gaughan said, also noting that it is important for students to pay their fees and take care of service hours to be able to attend.

Although the Student Leadership advisers noticed higher ticket sales this year, some students who have attended the homecoming dances throughout their years at MHS didn’t notice any difference.

“I felt like there was less people this year, but once the dance continued on for an hour, it filled up as normal,” said Michael Rastrelli, a junior who has attended three years of homecoming dances.

“One [the new activities] would be hallway decorating; we’ve brought back the Clash of the Classes, and those I think are other factors to get students excited about the week as a whole,” Gaughan said.

Another noticeable change over the past years, in an effort to increase ticket sales, was the switch to a new DJ company: myBOOMtour. This is the same company that Student Leadership hires to run WinterFest.

“What we’ve seen over the past year, is, for the most part, people aren’t leaving early, Gaughan said. “The last couple of years before that we’d see students stream out the last half hour before the end of the dance. This one it was pretty packed till the end, [and] so by the end we were having to kick kids out…which is a good problem to have.”

Some students, though, complained about the DJ and the music choice.

“Most people complained about the music, which was understandable…. [The music] wasn’t very danceable,” Flavio Diaz, senior, said. “A lot of songs people were like ‘how do you dance to this?’”

Another complaint many voiced was the heat in the gym because of the lack of air conditioning. CO2 cannons were brought by myBOOMtour per request of Student Leadership in order to blast cool mist into the gym, but that effort was not enough to keep the gym at a comfortable level.

“[The dance] was hot, but people were having fun,” Diaz said, referring to the general feedback he had heard regarding homecoming.

Since Student Leadership seeks to be representative of the student body, the club advisers said students are also welcome to give members feedback about the dance.

“[Student Leadership] is a democratic institution; we want to hear student responses,” Gaughan said. “Certainly we’ll hear criticisms, but we don’t just dwell on that. We want to hear what specific things can we do to fix that…. We want to do what’s reflective of what the students want.”

For next year, the Student Leadership advisers said they are going to try to look into having temporary air conditioning for the dance, and because of the increase in numbers this year, they plan to look into expanding spaces students can move into beyond the Cafeteria, the Commons and the Main Gym.

“Things [administration and Student Leadership advisers] considered is potentially opening up other parts of the school, so there’s more area for students to disperse,” Gaughan said. “We have to always constantly try and weigh that with student safety and making sure that we can manage the crowd.”

Looking forward to the next dance that the school will host – WinterFest – Student Leadership representatives said they are also hoping to see numbers rise. There has been a general decrease in numbers for the winter dance, and not just at MHS, but MHS is trying to move away from the couples dance environment around winter dances toward a dance that is for everyone.