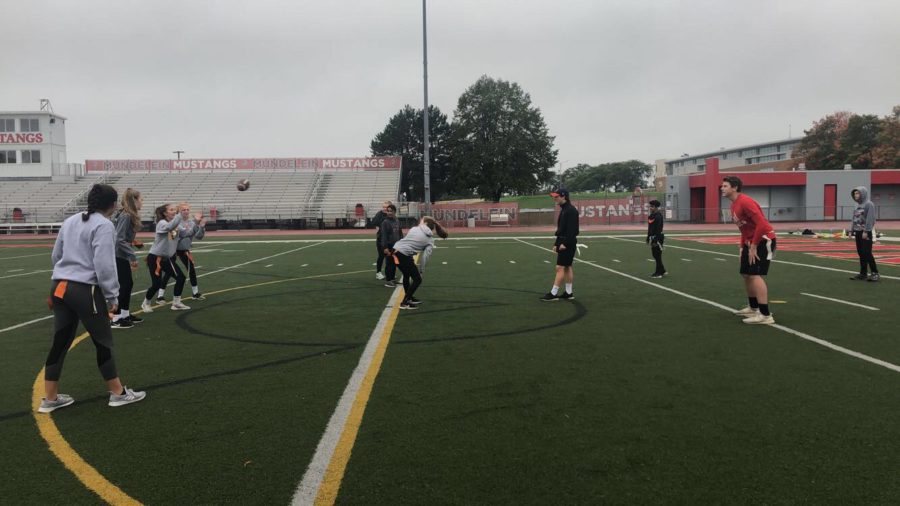 Two flag football teams stand on the field while facing each other on a Sunday morning.

Students who don’t get to play football or who want to engage in a different sport with their peers can now participate in intramural flag football.

“I was kind of jealous in a sense that we only have powder puff, and that’s only for girls,” said senior Hannah Stanley, who founded intramural flag football at the school.

After Stanley had this realization her freshman year, she worked toward getting this co-ed club sport started. Supervised by Wellness Teacher Bridget Erickson, the club began its pilot year at the end of September with seven participants.

“I discussed it among some of my friends, and a lot of them said that they’d be interested,” Stanley said.

So, after learning there was an interest, Stanley talked to her father who encouraged her to “take the opportunity.” Stanley, then, took the idea to Athletic Director Troy Parola. Together with the help of Assistant Principal of Student Services Mike Pope, they created the foundation for the club.

“It took about four meetings until we had a solid agreement on what we needed,” Stanley said about the process for forming the club.

The meetings included discussions about what the rules would be, how to get involvement from the different grades, how to schedule times for use of the football field and how to get a sponsor.

Erickson said she knew she wanted to be a sponsor when Stanley first proposed the idea to her.

“[It’s] another way to get kids active and connected to the school,” Erickson said. “It gives them an opportunity to meet new people and play a competitive sport and have fun.”

Erickson’s role for the club includes setting up the game schedule, planning when the club plays, communicating that schedule with the club members and supervising on the Sundays the club meets to play.

The original plan for the club was to create separate leagues for the girls and the guys. That plan was challenged when it became difficult to find a group of girls to create their own league.

“We ended up creating one giant league of all grade levels [and genders],” Stanley said.

Co-ed for intramural flag football means that girl teams play guy teams, but there are no mixed boy and girl teams.

Junior Mark Scarzynski said he’d like to see more teams from each gender.

“It brings a more competitive balance to [the game],” Scarzynski added.

Other players have different ideas about the co-ed experience.

“Having the option of doing co-ed is a great idea, but it shouldn’t have to be required,” senior Anthony Heelan said.

His observations from playing, though, are that most people are okay with a co-ed sport.

The introduction of a flag football club has provided another opportunity for students to get involved in the school community.

“It was the perfect opportunity to be athletic and competitive,” Heelan said about joining the club.

The competitive side of the sport is why Scarzynski also decided to make a team and join.

“I’m a competitive person, so definitely that aspect of it [I like],” he said.

“I’ve heard more talk about the club now that we have started games, and I believe we’ll have a lot more kids next year,” Erickson said.

While getting flag football started at the school was a process, Stanley said the atmosphere of the club has been really fun and that “the willingness of all student, genders and grade levels to play each other was amazing.”