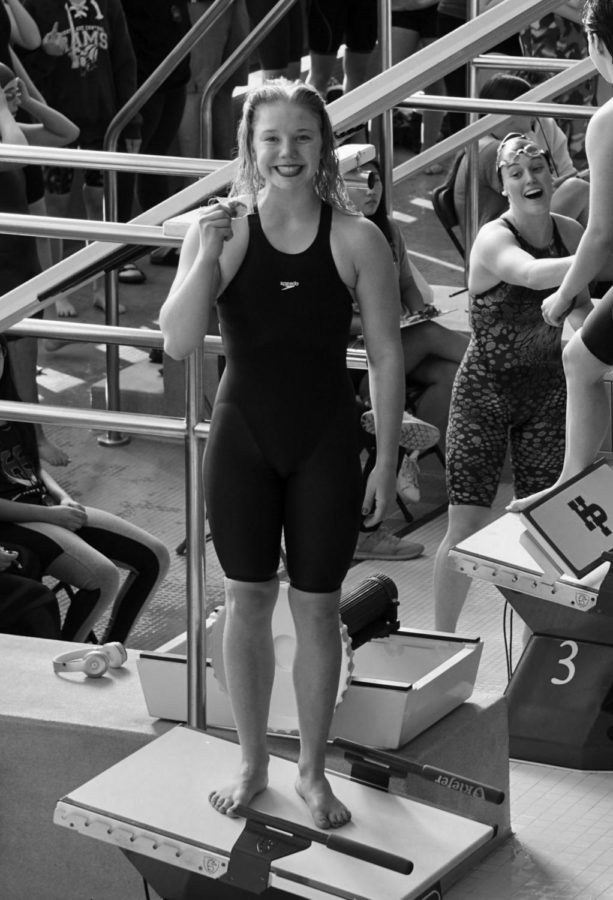 While on the swim team, Kasemets also competes on a club swim team. She has been successful on both teams, qualifying for state and other championships.

As the swimming season officially came to an end, one of the star swimmers ended her junior year with a bang. Even though she has gone to state before, junior Adry Kasemets broke many records and placed second at the Nov. 22-23 state competition in the 100-yard breaststroke at New Trier High School.

“Watching her swim through the years, I always thought she had potential to be an elite swimmer, and since she has gotten older, she has become more purposeful, focused and driven to succeed,” Coach Rahul Sethna said. “So for me, seeing her age through the process has been great as a coach.”

Throughout the season, Kasemets has swum at every meet with the goal of breaking a pool record or her own personal record. She said she pushed herself to consistently drop her times in order to know she swam at her highest ability.

“My biggest goal this season was to get faster, and I am glad I made this achievement,” Kasemets said. “By realizing putting in the effort and that practice really makes a difference, I knew I could accomplish this goal.”

During the summer, Kasemets won the Futures Championships with her club team. Through this win, her confidence grew, and it transferred to her school swim season.

“Adry is so hardworking and very dedicated to the sport,” Captain Angela Bowes, senior, said. “You can always count on her to perform, and she’s great at getting people pumped up.”

“She is one of the best pure “racers” to come through our program,” Sethna said. “Many people shy away from those big moments or don’t want to be the one that has the pressure on them. She loves those moments and wants to race.”

Kasemets qualified for three events to compete at state.

“You can always count on her to perform. When we are at meets, you know Adry will swim fast and score us a lot of points, so we place higher,” Bowes said. “Also, when she swims well, she motivates the rest of us to try and do the same.”

Kasemets said the team this year helped with her achievements because she felt much more growth and close relationships with the team compared to other years. She said her experiences with her team made her even more encouraged to swim not only for herself, but for her teammates as well.

“My team helped me so much, and I have helped them, too,” Kasemets said. “I don’t know what it is about the team this year, but I have gotten so close, and we have so much energy for everyone’s races and every meet we compete in.”

In terms of next season and collegiate swimming, Kasemets said she plans to break many more records and keep her options open for athletic opportunities in college. She knows colleges see her potential, but she still wants to focus on her high school career before she turns to college opportunities.

“I’m proud of her for chasing her goals and following the process to achieve them,” Sethna said. “We always talk about dreaming big, and I love that she does and is not afraid to go after them. Too often athletes let the risk of failure stop them from doing big things or putting themselves out there, yet she isn’t like that at all.”