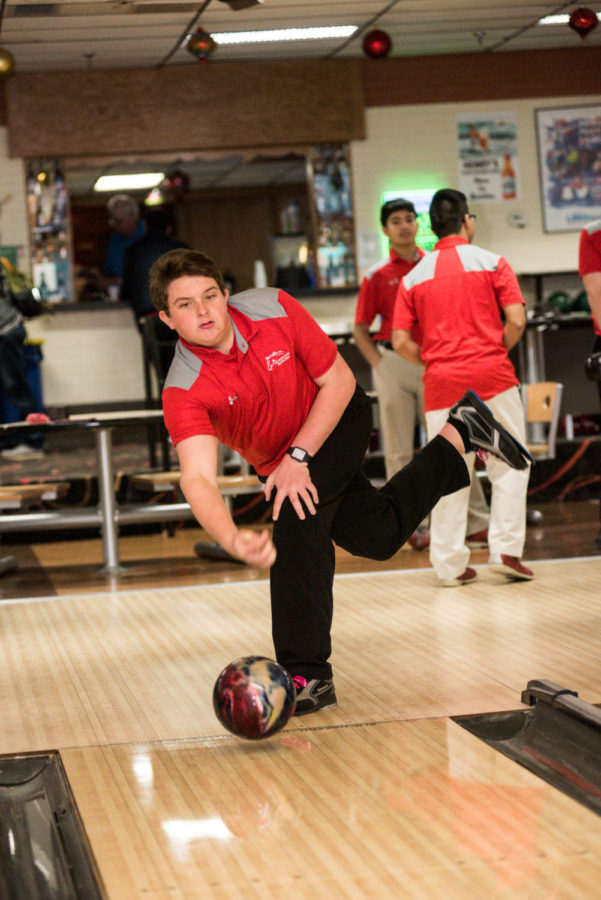 Nick Prochnow, senior, bowls at a practice on Dec. 3, 2018. Prochnow has been on the team for both years of the program’s existence.

The boys bowling team has already started its second season, setting goals related to team building that will set up the team for the remainder of this season and the program for more seasons to come.

“We are trying to build consistent bowlers that are going to compete at the varsity level,” Varsity Coach Chris Sweno said.

The varsity team competed in its first bowling tournament of the season on Nov. 9 against Glenbrook North High School. The boys placed fifteen spots ahead of where they performed last year.

This tournament along with practices gave the varsity bowlers a chance to enhance their bowling skills before their first match on Nov. 11 against Grayslake North High School.

“We have a few guys trying to establish themselves as [solid bowlers] this season,” Sweno said. “Hopefully by the end of the season, we will have [enough] bowlers that can [demonstrate their skills].”

Even though the team lost several bowlers last season because of graduation, there are more boys participating in bowling this season than last season.

“A lot of our guys this year are new to the sport,” Sweno said. “Getting them to learn the ins and outs of bowling, and teaching them how to throw the ball correctly is a challenge.”

“It is [very] rewarding to watch [the guys strengthen] as bowlers and overcome those challenges,” Sweno said.

Freshmen Andrew Hamsey, Nic Proenza, Myles Kugler and Samuel Gottfried have attempted to contribute to the team’s success thus far in the season. Coach Sweno and JV Coach Robert Johnson have taught these freshmen bowlers other hands-on bowling strategies to encourage them to become aggressive bowlers through consistency and determination.

“JV bowlers have performed well and have shown vast improvement so far this season,” JV Coach Johnson said. “We have seen some of the JV bowlers bowl careers in the 150s, 160s and even as high as 199 in a game.”

Johnson added that the JV bowlers have shown the ability to compete against other ambitious schools in the area that have strong bowling programs. However, in order for the JV bowlers to remain competitive in such matches, the bowlers must increase their scores higher than those reaching the 160s.

One varsity bowler spectators should keep their eye on is senior Nick Prochnow.

Last season, Prochnow threw a 279 pin game, making an improvement with a 700 pin series. One goal Sweno has for Prochnow is for him to advance to state on Jan. 31 and Feb. 1. Sweno said he would like to see Prochnow bowl a 300 score by the end of the season.

Prochnow described one goal he has for the varsity team.

Prochnow said one challenge both teams faced last year was enabling new bowlers to adapt to bowling in the North Suburban Conference. Several bowlers are not used to many spectators watching their match, and groups of fans can range from small to large. This adds additional pressure on the bowlers. To prepare for the NSC Championship last year, the new bowlers focused on polishing their skills to minimize feeling anxious while performing their best.

This year’s NSC Championship is quickly approaching. The boys are using the remaining matches to hone their tactics and strategies as they focus on finishing the season strongly.

The varsity and JV teams will compete against Lake Zurich High School in the NSC on Jan. 10 at Bowlero in Deer Park.

“We are only halfway through the season so far, but [the JV] bowlers have seen their scoring averages rise 20 to 30 pins already,” Johnson said. “Other schools in our conference have had teams for a longer [period of time], so we are just looking to keep on building our team and getting better.”