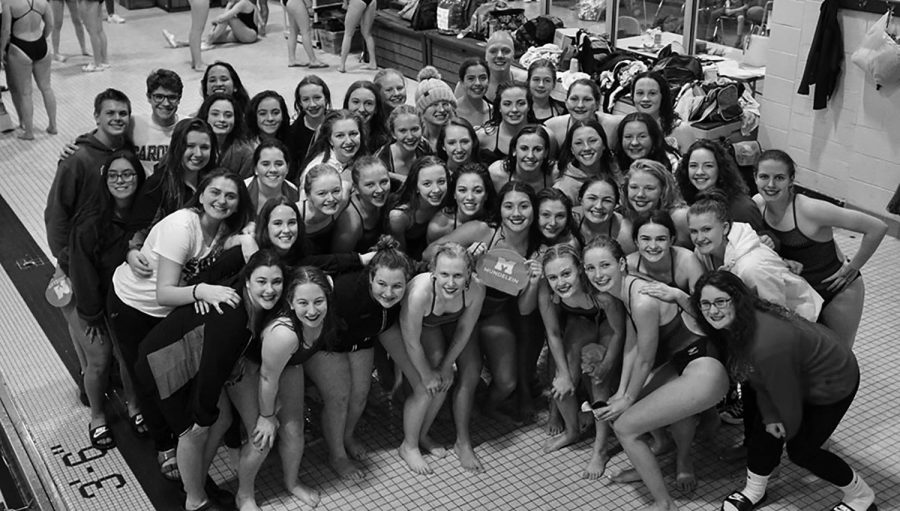 Varsity and JV swimmers and divers celebrate their victory against Warren Township High School, which placed the varisity team in third place and the JV team in second place in the conference.

After a steady winning streak of beating teams like Warren Township High School and Libertyville High School for the first time in the same season, sending numerous girls to conference, sectionals and state and breaking school pool records, this year’s varsity and JV girls swimming and diving team has made history.

“We had a good blend this year of good top-end talent but also a lot of depth,” said Aquatics Director and Head Boys & Girls Swimming Coach Rahul Sethna, who has been the head coach for the team from 1997 to 2005, retired and then came back to coach in 2013.

Both the varsity and JV levels beat Libertyville’s and Warren Township’s swimming and diving teams, making history for the first time with both levels beating both teams in the same season.

“Libertyville was such a big moment, but with Warren, we were set to lose,” said four-year varsity swimmer and one of this year’s team captains Sarah Parduhn. “We were expected to lose until the 100-yard breaststroke gave the 400-yard relay team a chance to win.”

Not only did all this help contribute to the success of this season, but so did the team captains– senior Angela Bowes, Parduhn, junior Jennifer Lopez and junior Lauren Carlson.

“They as captains were able to show me the fundamentals of being a part of a team,” freshman JV swimmer Nadio Emso said.

In addition to the captains, some of the state qualifiers– freshman Anna Kokosinski, freshman Riley Routledge, junior Adry Kasemets and senior Mackenzie Strong– have been contributors to the team’s success with their record-breaking, achievements and leadership.

“[Kokosinski and Routledge] got to go to the state meet this year, and they are both school record holders,” Coach Sethna said.

Members of diving, under the leadership of junior Elle Mishler, also have contributed to the season.

“With diving, it’s so different than swim because it’s what you make it to be,” Parduhn said. “[Mishler] adds great leadership to our team.”

Without the connections and bonding from the team as a whole, this season would have been completely different, stated team members.

“One of my favorite things is being able to see all of my teammates cheer each other on because, in seasons past, we have been more of an individualistic team,” Parduhn said.

Team members, then, could see all of the effort they put in as a team pay off individually.

“We work hard in practice and always cheer each other on, which I think is helpful,” Emso said.

The team worked to form those strong connections through team bonding activities, such as weekly pasta parties or just events after meets.

Coachability also depends on the mindsets created by the girls.

“At the end of the day, it’s not really all about your races, or how you swim, it’s how you treat or act after your races that really makes the team a team,” Parduhn said.

Overall, this season has been a whirlwind of success, making it one of the most memorable for several of the team members.

Coach Sethna said, “I want this, being on this team, to be the best part of your high school experience.”