Guadarrama leaves a mark after four years of MHS wrestling 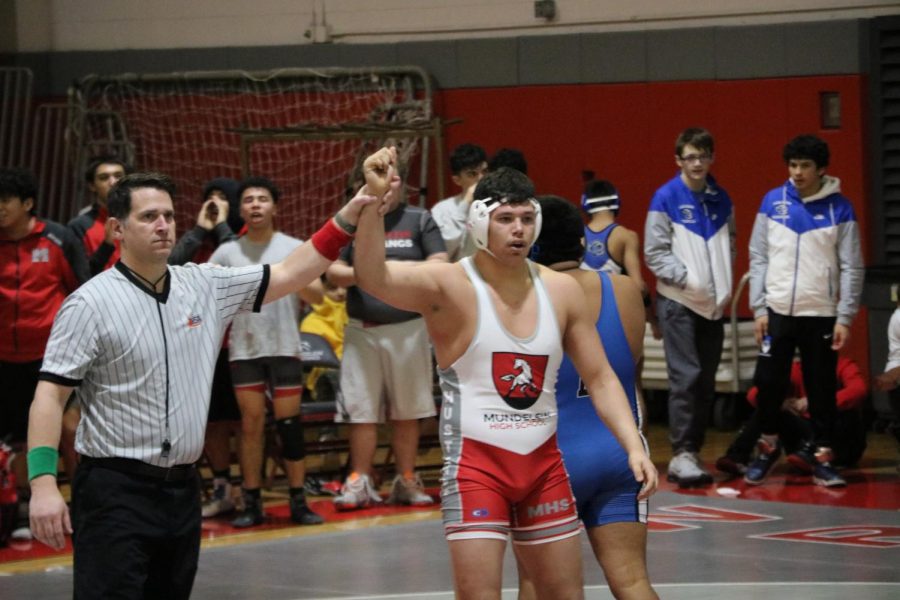 Senior Captain Jason Guadarrama has proved his abilities as a four-year athlete for the MHS wrestling program. With increased success each year, Guadarrama has set personal and school records to show his top potential.

“He is a great athlete, and by having a great season, he is very motivating,” said Benjamin Albavera, a freshman member of the wrestling team.

Guadarrama has wrestled for eight years, beginning in middle school and continuing in high school.

After wrestling for so many years, Guadarrama has learned from the intensity and the mental toughness needed to wrestle successfully. If it wasn’t for the desire to win, he wouldn’t feel the exhilaration that the sport has to offer.

“There’s no sport like it due to the fact that if you don’t do enough to get a victory, you have no one else to blame rather than yourself,” Guadarrama said.

While each sport requires an athlete to learn crucial lessons, Guadarrama said he learned more from each loss rather than a victory.

“You learn a lot from a loss than a win,” he said. “I am constantly learning from the sport every time I ultimately give it my all.”

He added the lessons he learns about discipline and persistence on the mat translates to important aspects in life.

“Jason is very competitive and very motivated by the teammates and himself genuinely,” said Rudy Osornio, a junior member of the wrestling team. “He’s always been the guy that the younger kids look up to, and he’s always trying to push people, including myself, to keep going.”

As a captain, Guadarrama has fulfilled a leadership role for the other wrestlers through encouragement and confidence. By being an experienced wrestler, he takes the opportunity to help those around him.

“Jason always acts as a leader in and out,” Albavera said. “He helps me with my mistakes in wrestling and helps me do the right things like being respectful.”

As a senior this season, he has the ability to use everything he has learned to pick up wins by consistently pinning many challenging or top opponents he faces. By using this strategy, his season has put him on top at many wrestling events.

Guadarrama also said he continues to find improvement every year as he learns more about the sport. He added with the help of his supportive teammates and coaches, he is able to learn from them specifically in order to reach his goals.

“Jason’s leadership just comes naturally to him,” Osornio said. “He’s always trying to do the right thing inside the wrestling room and also in the classroom. He’s a warm-hearted kid that has his priorities straight.”

As his season is close to coming to an end, Guadarrama plans to wrestle at the college of his choosing. Before his collegiate future becomes his main focus, though, he said he is excited to wrestle at regionals and qualify for sectionals in order to become, hopefully, an IHSA state champion.

He said, “I want to approach the goal of becoming an IHSA champ one match at a time because before this can happen, you must first qualify for the prestigious state tournament and never overlook any opponent, especially because Mundelein has never had a wrestling state champ.”

Biggest accomplishments of past four years

Besides having more than100 wins, being a school pin record holder and an extended personal season pin record holder, senior Varsity Wrestling Captain Jason Guadarrama also has created a long-list of achievements from freshmen year until now.