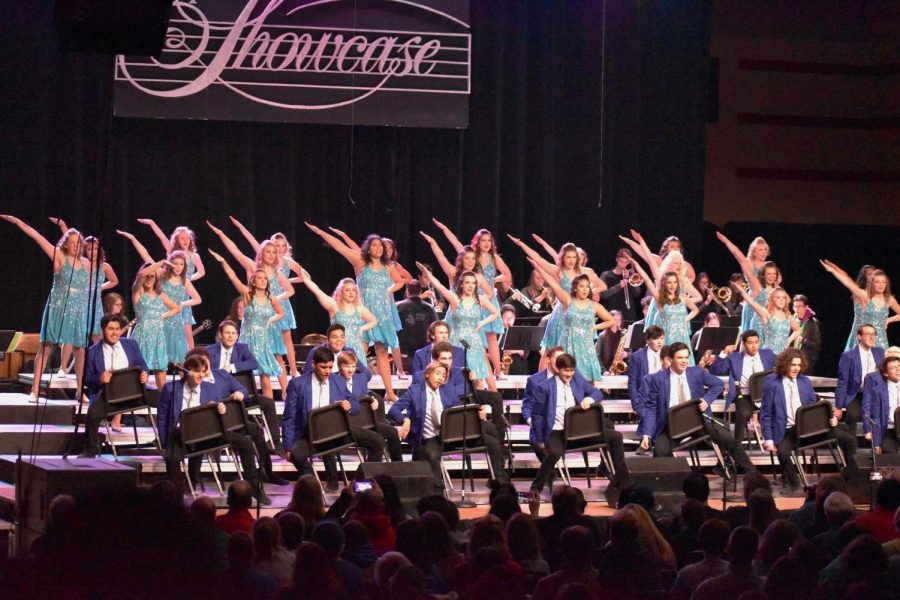 Sound performs “Happy Train” at the Totino Grace Show Choir Spectacular in Minneapolis from March 6-8. The group added a fresh element by dancing with chairs throughout the song.

This year has been one defined by a track record of top performances for show choir with several wins and runner-up honors under the program’s belt.

Choral Director Stevee Bellas said she sees their success as a result of a record-number of members and a collective drive within the groups– they were hopeful this success would extend to this season’s final competition held March 6-8.

“I think the students are really motivated by each other to find success. This is my fifth year at MHS, and our programs have continued to grow, which is really great to see,” Bellas said. “I think our students feel really supported by the environment that they’re in, so they feel that they can grow as individual performers and as a group.”

“I feel like this year we’re all so invested in it– we’re all really fighting to make it to finals and win [Grand Champion]. We all have such a passion to win and prove ourselves against the other teams,” said Lights and Sound member Katelyn Staroszczyk, senior.

Lights opened its performance with “You Keep Me Hangin’ On” and “Something New” followed by the ballad “Always” and closing with “What’s It Gonna Be.”

Sound’s set was inspired by celebration, with high energy and upbeat music; this group performed “Loud,” “Happy Train,” “Caught in the Storm,” “Everybody Get Up” and “Never Close Our Eyes.”

Sound FX based its songs on the theme of redemption and comebacks, performing “Here We Go Boys,” “The Comeback,” “How to Return Home” and “When Legends Rise.”

“The idea [of a comeback theme] arose after last year when, during competition, FX had a hard time beating other groups, and the theme this year has really showed the progress we made as a group since last year,” Chris Nacion, sophomore, said.

Behind the scenes, the success continued with show choir’s band, Noise. The group won the best band award twice this season; they won at Fort Atkinson as well as at Clash of the Sequins for the second year in a row.

“I think we have done so well this year because of the work we put into practicing and working with the choirs. We are constantly getting feedback on things like dynamics and balance, and we often rehearse with them to make sure everything goes smoothly,” said Noise bass guitar player Kamryn Laureys, junior. “[The band and choir directors] also listen to the judges’ and clinicians’ comments to improve our show after every competition.”

Show choir competed for the last time this year at the Totino Grace Show Choir Spectacular in Minneapolis from March 6-8. Bellas said she saw this last competition as “a nice, longer weekend to spend together and reflect on the season.”

Going into the competition, Staroszczyk said she hoped that with the show choir’s several wins this year, the title of grand champion wasn’t far out of reach for the groups at Minnesota.

“If we won Grand Champions for our last competition, that would put all of us over the moon,” said Staroszczyk. “I feel like we’re going to be fighting this time, so I have really high expectations for our groups because we’ve done really well so far.”

While the groups did not necessarily place as hoped, they still placed in the competition with senior Matthew Callas winning best soloist again this season.