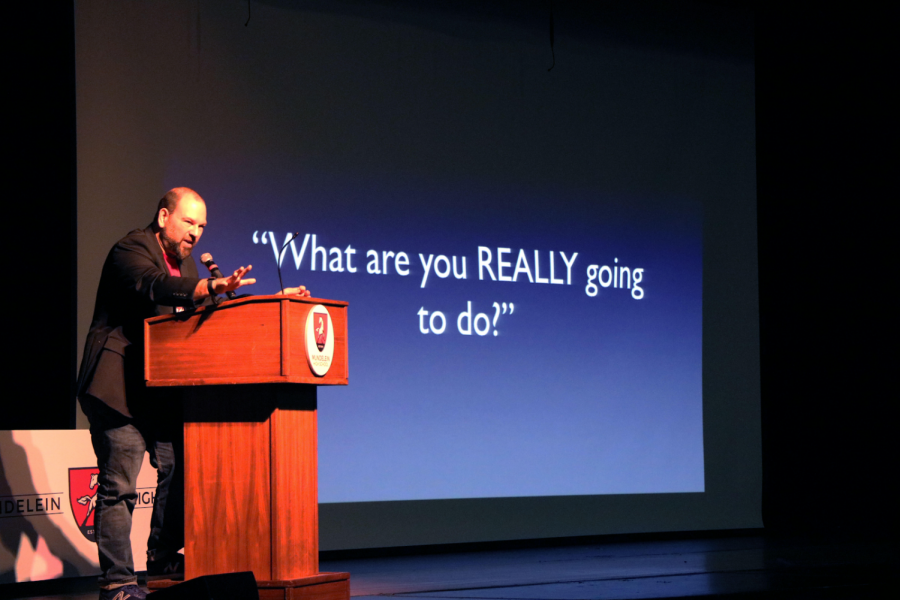 While explaining his background, guest speaker Barry Lyga, promotes his books to his audience on Feb. 25 in the school Auditorium. Lyga engaged his listeners with "serial killer fun facts" and also explained his methods of writing thriller novels.

For Tuesday, Feb. 25, Media Center Specialist Rebecca Plaza invited Young Adult Author Barry Lyga to speak to MHS students and staff during their first, second or third period English classes in the Auditorium. This is the fifth year in which MHS has hosted an author’s visit.

Lyga attended Yale in 1993 and majored in English. Some of his well-known young adult book genres include those of suspense, comics and science fiction, but he is most well-known by the MHS students for his ‘I Hunt Killers’ series. He wrote four murder mystery novels in this series, which follows the son of a serial killer who is forced to face his fears that he will one day walk down his father’s footsteps.

“His books are definitely popular,” English Teacher Corey Knigge said. “The ‘I Hunt Killers’ novel has been checked out 250 times by middle school students.”

“I Hunt Killers” placed third in the New York Times bestsellers list of 2018.The MHS Media Center strongly encourages students to read Lyga’s books. During his presentation, the audience seemed to value his integrity, funny personality and words of encouragement for students interested in following the writing career path in the future.

“I think it is really important to listen to authors because teenagers would feel discouraged to hear that their writing isn’t good enough,” junior Alexis Lee said. “But at the same time, I feel like they would feel encouraged to start a career in writing.”

Lee, who attended the event, said she assumed that Lyga would be very serious because he earned a degree at Yale. But as he spoke, she realized that he actually has a very funny personality.
However, as he continued to speak, he offered a more serious message, by stressing the importance of “following your bliss,” a quote he attributed to Joseph Campbell. Lyga said his hope for all young adults is that teens continue to follow their dreams every day and to discover in themselves what their hearts truly want them to do as they grow older.

“I hope that teens read and understand his books,” Plaza said. “I hope they take away his message of finding your passion in life.”

At the end of his presentation, students asked Lyga questions related to his writing career and his genre-varying novels.

“I think students really enjoy listening to authors speak,” Knigge added. “[In return,] the authors really enjoy interacting with students by talking about their novels.