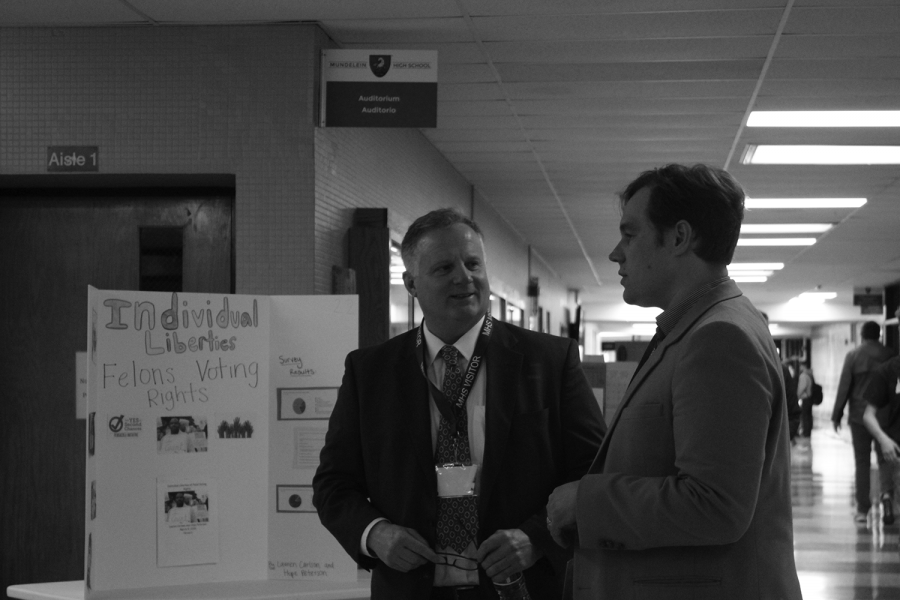 Lake County Circuit Judge Christopher Morozin speaks with a campaign aid for Dr. Tom Tarter, a Republican candidate for U.S. senator, as they tour the Civics Fair held in the Commons by AP Government students on March 5 during the lunch periods.

Junior students in government classes displayed their ideas about local government reform in the Commons and Main Hallway during all lunch periods on March 5 for the annual Civics Fair.

“So much of government has always been taught how things work and not really to question why things are the way they are,” said Thomas Kuhn, AP Government teacher, who helped organize the event.

Stevenson High School first piloted a civics fair about two years ago. It was organized by the school’s political actions club; Kuhn said he felt MHS could benefit from a civics fair.

“The goal is to get the kids to learn the founding principles of our country that came from important documents and teach them to apply those values to things we do today,” Kuhn said.

Junior Carolynne Burk participated in this year’s civics fair and focused on Illinois redistricting. She said she wishes to get rid of the split between house representative district 51 and 52.

Urban attended the Iowa caucus and said he felt strongly about its structure for future caucuses.

“I saw how unorganized and how big of a problem it is since the results took almost two days to come in after [the] caucus took place,” Urban said.

Participating in a civics fair offers students the chance to have their voices heard and ideas thoughtfully considered by a serious audience of local government figures, such as Holly Kim, Lake County treasurer; Chris Bos, Republican candidate for Illinois House seat; and Valerie Mukherjee, Republican candidate for House of Representatives, who were invited to attend the fair.

Burk said she enjoyed the open discussion sparked by the civics fair.

She said, “It’s a really good thing that high school students have the chance to represent their ideas to people.”