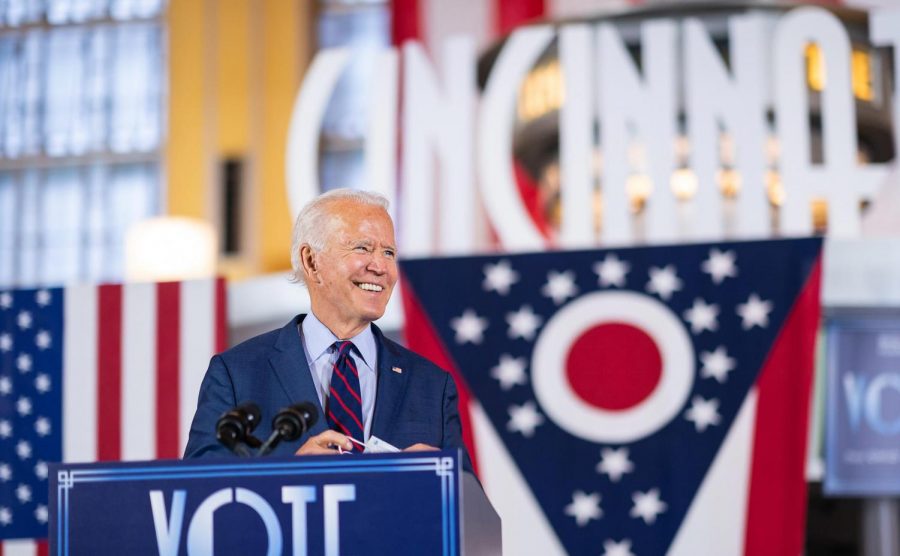 Joe Biden won the presidential race, and is prioritizing COVID-19, climate change, racial equity and economic recovery as president-elect. “We are in the battle for the soul of this nation,” Biden said on April 25, 2019, the day he announced that he was running for president.

Many experts have considered the 2020 presidential election an historic one– one defined by a record-number of voters in a climate many perceive as politically divided during the COVID-19 pandemic.

President Donald Trump took an early lead in the race, but following the counting of mail-in ballots, the tides turned. Joe Biden took key states, such as Georgia, Nevada and Pennsylvania, solidifying his win with 306 electoral votes to Trump’s 232.

However, Trump has yet to concede and continues to claim fraudulent votes have led to his loss. Despite there being no evidence to support his claim, Trump is exploring legal options to win the race back.

MHS staff and students weighed in on the uniqueness of this divisive election and the importance of participating in it.

Andrew Hood, a Social Studies teacher and the Political Actions Club sponsor, said the Nov. 3 election differed from previous ones due to the addition of external pressures, mainly the COVID-19 pandemic.

“Due to the pandemic, this election has required many different types of voting, which adds complexity and longer wait times for an official vote count,” he said as America waited for the election results, which weren’t announced until the morning of Saturday, Nov. 7. “We need to be patient as an electorate, as it is imperative to wait for all votes to be counted and all voices to be heard.”

He also said this election was similar to the 2000 one between Democrat Al Gore and Republican George W. Bush.

Additionally, Hood commented on how the political climate has become harsher since the first time he voted in 2008.

“The political climate has definitely become more hostile since then, but I believe that the polarization of the major political parties and their ideologies has been worsening since the election of 1980 between Democrat Jimmy Carter and Republican Ronald Reagan,” Hood said.  “Since that election, both the Democrats and Republicans have been less and less likely to collaborate and work across the aisle in a bipartisan spirit. Also, the nation’s population has grown more diverse in every way, which makes it difficult for all voices to be heard when there’s only two major political parties to represent them.”

Thomas Kuhn, Social Studies and AP Government teacher, said this election differed from previous elections because of how people received information about it. Kuhn mentioned how much easier it is to get the information people need to pick a side from Twitter, Instagram, Facebook and other social media platforms other than from the traditional news organizations.

“We have access to so much more information, so people are very selective about where they get their information from, so nobody wants to change their mind,” Kuhn said.

Kuhn also discussed how in previous elections candidates typically had similar views about how to run the U.S. This year, though, the two candidates have very different ideas in what they think is best for the country.

“I think it’s sad that whether or not you take this pandemic seriously depends on which political party you’re voting for,” Kuhn said.

Despite the political divisions, though, U.S. Government teacher Michele Bonadies said she was excited to see such high involvement of the American people during this election.

“I love watching democracy in action,” she said. “Traditionally, the U.S. has a low voter turnout rate, so it was great to see people voting in such historic numbers.”

Bonadies also stressed the importance of participating in elections given the nature of the U.S. government.

“I did vote this year; I vote in every election,” Bonadies said. “Given that we are a republic and not a direct democracy, I feel it is very important to always vote to have a say in who will represent us.”

Senior Ilya Vynnyk, founder of Political Actions Club, who has been closely following politics since middle school, said this election has gotten him even more interested in politics as Election Day approached and then passed.

“This election has been extremely interesting and contentious because of the uncertainty over absentee ballots,” Vynnyk said. “As if 2020 couldn’t get any worse, this election could be contested until December with legal challenges mounting on both sides.”

With the voter fraud claims Trump has made throughout the election, Vynnyk noted that what President Trump has said is both premature and inclusive, especially when there were still millions of votes yet to be counted.

“Although some people claim that voting isn’t important in ‘safe’ blue or red states, my belief is U.S. House, U.S. Senate, Illinois House and Senate, as well as other local races have a larger impact on you than the presidential race,” he said. “For example, in 2018 my State Rep. first lost her seat by only one vote and later won by about a 1,000 votes after a recount. Every vote counts!”

Therefore, Vynnyk did vote in this election and conducted research in preparation for casting his vote.

“I met with most of the candidates through the events that I attended and had a good idea of what each person stood for,” Vynnyk said. “I also hosted a Candidate Forum for the IL-51st House State Rep. race between Mary Edly-Allen and Chris Bos where I asked both candidates tough questions about their positions on certain issues.”

Unlike Vynnyk, Laryzza Lazaro, senior, said she does not consider herself “a very political person,” but as she watched how issues unfolded leading up to the election, she understood it was important to vote.

“As a woman, person of color, and a part of the LGBT+ community, it’s vital to have my voice heard because something as mere as my rights were at risk of being lost, whether or not people believe that,” Lazaro said.

As a first time voter, Lazaro’s parents had her go in person to get a feel for what a typical voting experience would be like.

“I voted because regardless of what anyone’s point of view is, it’s important to get your voice heard,” Lazaro said.

She added she understood Biden is not perfect, and he will be held accountable for any unethical actions, but “[she] was so excited about him being president-elect.”

“Personally, and I know others agree with this, too, I celebrated Trump’s loss, not Biden’s win,” Lazaro said.

While Vikram Chandramouli is a senior, he was not 18 yet by the time of the election; however, he said he still kept himself informed in more ways than one.

“I researched each candidate in my district, so I could be informed as local elections directly impact us,” Chandramouli said.

He also kept up with the news on the week of Nov. 3.

“I watched election coverage for the four days, and it was stressful to wait that long,” he said.

For some, Chandramouli is an example of how one stays informed and involved before turning 18.

“I feel like it’s important to be engaged as these are defining moments of our democracy,” he said. “There has been a lot of change in the last four years in the presidential office, and it’s important to have a say in that.”

Senior Morgan Shumski also was not 18 in time for the election; instead, she turned 18 the day after the election.

Shumski said she feels as though her “vote would just add to the number even though Illinois is already a blue state.”

“I want to feel like I was a part of this election process because it was so important this year,” she added.

It was an important election to Shumski because she wanted to have a say in who the next president would not be.

“It is upsetting just how many people saw how [much] chaos this man we called the president brought into our country and then thought, ‘Yep, let’s do that again; I liked him,’” Shumski said.

No matter people’s presidential choice this election, several people focused more on the importance of the democratic process.

“Regardless of the results in the next couple of days and weeks,” Vynnyk said before the election results were released, “we as Americans need to come together and respect the results of the election. Not doing so will only further sow the division that this country is facing right now.”