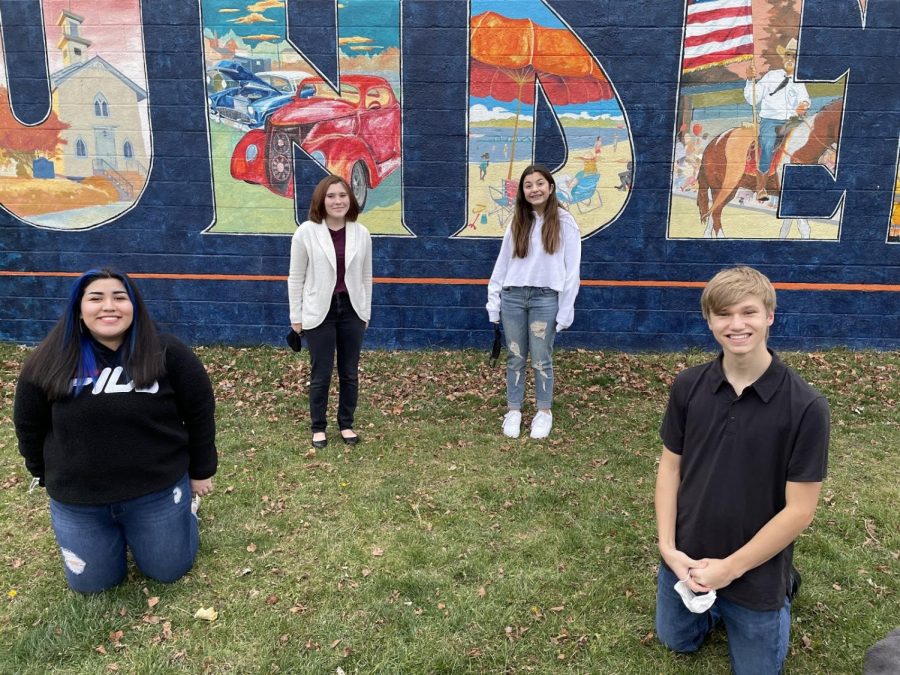 In a heated tent outside of Area Coffee in Mundelein, senior Rosy Castro, freshman Kai Ackerman, freshman Gianna Feather and junior Eli Walter film “Something In Common,” a play by Robin Pond, directed by Castro. This play, along with 11 others, will stream on Dec. 12 and 13 for virtual audiences.

While a global pandemic put much of our lives on hold, Theatre Director Jonathan Meier has continued to put on productions this semester via Zoom and in-person rehearsals.

“We have all lost so much during this pandemic,” Meier said. “All of us in the Performing Arts area (band, theatre, choir) are doing everything we can to keep these important opportunities available for our students.”

Those involved in the theatre program have continued to put on shows this semester by holding rehearsals every day after school for 2-3 hours. While struggling at times, the work they’re capable of doing on their shows is able to “keep [them] all sane,” said Meier.

“I think it is important to continue our shows because theatre gives many children a sense of community and belonging, which is very important for many of the new members,” senior Joslyn Gange said.

During the fall, the theatre program was able to put on an in-person production– a rendition of William Shakspeare’s “Much Ado About Nothing”– on the MHS football field Oct. 16-18.

According to Meier, Shakespeare sets are very simple, and the description of the setting is all in the language; because of this, the theatre program had only three large flats in the center of the field with the play’s name printed on it. Other flats off to the sides included renditions of Shakespeare wearing a mask. Additionally, several black boxes acted as different levels for the actors and as social-distancing markers.

To rehearse this show in person, theatre would use the North Courtyard and the Auditorium.

“We follow all safety protocols when we rehearse,” Meier said. “It makes it a challenge to produce a show when the actors cannot get within 6 feet of each other, but that is part of the fun of it.”

Unlike other high schools in the area that are limited to all virtual situations, Mundelein administrators have been willing to work with theatre to continue the program’s work. With lots of effort put into making this theatre experience as close to normal as possible, Meier said the morale of the cast and crew is “quite high.”

“We are motivated to get back in person when rules allow and are very excited that we were able to work in small groups to get [performances] done.” Gange said.

With the changing weather making outdoor rehearsals a little trickier, Mundelein Theatre has had to find more spaces to safely rehearse for its upcoming performances– student-directed New Faces One Acts, which are 12 short plays directed by the seniors in theatre. They will be streaming Dec. 18-19, 7-9 p.m.

If interested, tickets can be purchased to watch the streaming production via a link on the D120 website.

“We filmed [the one acts] inside the heated tent outside of the Area General Store,” senior Matthew Callas said. “One half was open, and every angle had a camera filming it, and the other half was cluttered with set pieces of all kinds.”

Along with being able to experience Mundelein’s version of theatre in the pandemic, Callas was selected for the 2021 Illinois High School Theatre Festival. Although it was canceled, IHSTF put together a virtual show, “Cabaret,” where selected seniors all across Illinois, like Callas, spent many fall weekends rehearsing the show.

“Compared to Mundelein continuing to put on productions in-person, the All-State cast is completely virtual,” Callas said. “It is a lot harder to sing in an ensemble that you can’t hear, but everyone in the cast is trying to make the most of it like everybody else.”