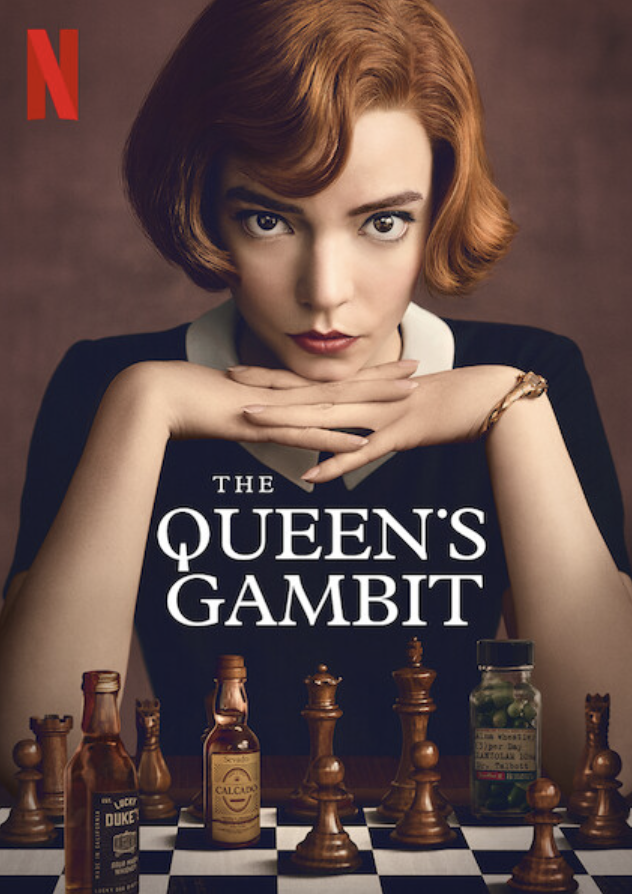 “The Queen’s Gambit” was released on Netflix on Oct. 23 and ended up breaking records. The show became Netflix’s most-watched scripted limited series, amassing 68 million views in the first 28 days of its release, according to Variety’s Nov. 23 article titled “‘The Queen’s Gambit’ Scores as Netflix Most-Watched Scripted Limited Series to Date” by Todd Spangler.

Disclaimer: This series has been rated Mature by Netflix for drug abuse, language and smoking. Please be advised that this review discusses substance abuse as portrayed in the show.

“The Queen’s Gambit” follows the life of chess prodigy Beth Harmon, a fictional character played by Anya Taylor-Joy, from living in an orphanage to becoming a world-renowned chess player. The Netflix Original limited series is based on the 1983 book of the same name written by Walter Tevis. A series with a focus on chess may not immediately pique one’s interest, but I assure every potential watcher, “The Queen’s Gambit” will draw a viewer’s attention from the very start.

In the first episode we are introduced to a nine-year-old Harmon, who begins to play chess with the orphanage’s janitor, Mr. Shaibel, played by Bill Camp, in order to pass the time. She took to the game quickly, playing in her head at night and poring over books about becoming a better player.

Upon being adopted, Harmon begins playing in competitions, realizing she could make some extra money if she won– and she won often. Her adoptive mother, Alma Wheatley, played by Marielle Heller, takes notice of her daughter’s success and encourages her to attend competitions across the country. The press takes notice of Harmon’s talent, labeling her a child prodigy. Her career only grows from there, taking her around the world to compete against the best of the best by the end of the series.

What makes this show so special is that it doesn’t stay true to the cheerful “zero-to-hero” storyline one might expect to see, as with the glamour and success Harmon earned came trauma and hardship.

“What really struck me about ‘The Queen’s Gambit’ was that it wasn’t at all about chess– it’s not about a game; it’s about the cost of genius,” Scott Frank, writer and director, said in the Netflix special “Creating the Queen’s Gambit.”

Throughout the seven-episode series, Harmon is seen at her very best in one scene and at her very worst in the next. She wasn’t always on the up-and-up, and that’s what makes this series as good as it is. She faces trouble with her adopted family from the very time she is brought to their home, and unexpected dilemmas occur throughout her career. Above all, a key element in her life and career was her reliance on substances, which stemmed from the tranquilizers she was given daily at the orphanage.

“Something that I found fascinating about addiction is, whatever it was that you were using these things to self medicate for, it worked for a period of time. That’s why you were doing it. What destroys you is when it stops working, which it inevitably will. That’s when your life goes completely off the rails,” Taylor-Joy said in an Oct. 22 video interview with ScreenRant. “So, it was fascinating to figure out why she was doing it, if that makes sense. Is she drinking right now because she feels incredibly isolated? Is she partaking in the pills because she thinks that this is the only way that she’s going to win this? Her emotions are too much, and she needs to calm them down. I think understanding that made sure that we weren’t making a parody of addiction, and that we weren’t looking at this cartoon thing of, ‘Oh, now I’m really messed up.’ No, this is a very serious disease, and there’s a reason for all of it.”

Harmon is a truly unique character, defined by her detached personality, assured demeanor and independence. Her personality gives her the ability to succeed in her career but also the potential to ruin it.

“This character is essentially her own antagonist, and I was fascinated. I’d never read a character like this before– somebody who was so brilliant and so self-destructive,” Frank said in the Netflix special.

Harmon’s outlook on life is made more interesting due to the time period in which the show is set, as she saw herself in a way that is more akin to a woman in the 21st century rather than in the mid-20th century.

“One of my favorite things about Beth is she exists kind of outside of society, so she genuinely is baffled whenever people bring up her gender,” said Taylor-Joy in an Oct. 16 Observer article, “What Anya Taylor-Joy Learned About Chess and Alcoholism for ‘The Queen’s Gambit’” by Nadja Sayej.  “She doesn’t understand why it has anything to do with her independence. I do think that’s a nice message to send, one where she lives in a society where gender or how you identify doesn’t dictate the moves you’re allowed to have.”

“The Queen’s Gambit” is truly an all-absorbing show and draws viewers in episode after episode. With only seven episodes, it’s length stood out to me. It goes further in depth than a movie would, but omits the filler one finds in an average-length series. With its retro style and one-of-a-kind plot, this is a show one simply cannot skip.