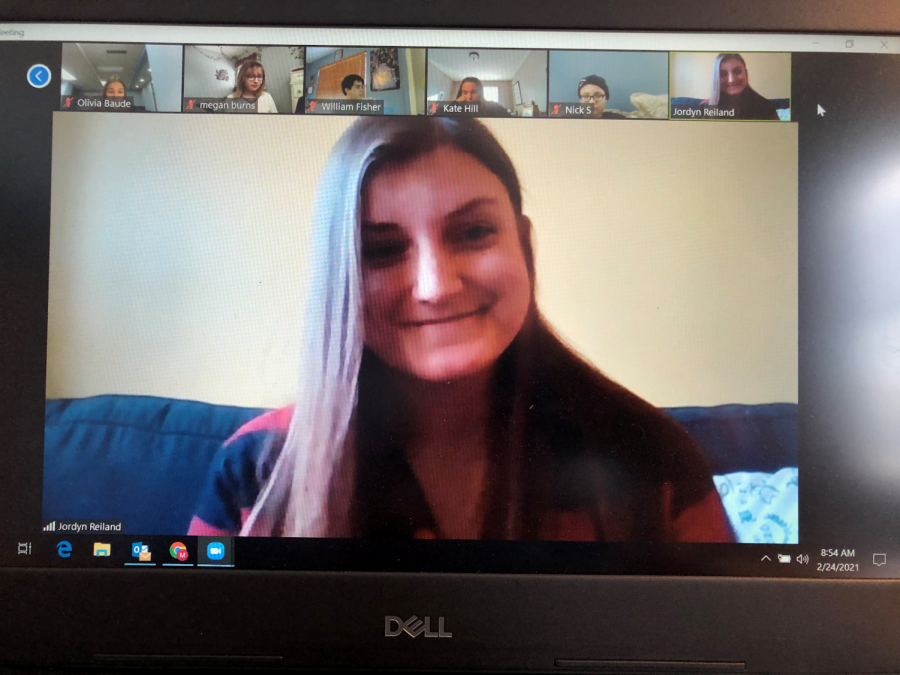 Jordyn Reiland, from the MHS class of 2011, joined a Zoom call with The Mustang journalism staff as a guest speaker on Feb. 24. She gave her honest perspective about being a professional journalist. She said, “I have to learn as I go.”

Jordyn Reiland, who served on The Mustang staff and graduated from MHS in 2011, shared her post- high school experiences as a professional journalist during a virtual visit with the current Mustang newspaper staff on Feb. 24.

Reiland said she had a passion for writing from a young age and “wanted to be a writer since [she] was 5 years old.” She recalled writing stories as a child and selling them to her grandparents.

In high school, she served as co-editor-in-chief of the school newspaper her senior year, and in the process of deciding her post-secondary plans, Reiland said, “It was always going to be journalism one way or another.”

She attended the University of Iowa where she double majored in journalism and sociology with an emphasis on criminology.

For those looking to study journalism, Reiland recommended double majoring because it “forces you to do two things at once.”

She also recommended not being afraid to change plans as life unfolds. For example, Reiland originally entered college for sports studies and journalism because she wanted to be a sports writer but her career path has led to a focus on court and law coverage.

“Do what you want to do because the worst that happens later on in your career is you just leave. You’re going to find something else; you’re going to figure it out,” she said. “Don’t get so hung up on something now. Change is good; it’s scary, [and] it can be really difficult. It forces you to get out of your bubble and grow.”

Reiland graduated from the University of Iowa in 2015 and spent her four years there working on the college’s newspaper, the Daily Iowan, as a reporter and eventually as the editor-in-chief.

She noted her life during college was harder than her current work life because she was balancing being a full-time student and working for her school paper. The experience, though, was valuable for employment, she said.

“[Employers] want to see what you are doing outside the [journalism] classroom,” she said.

During her time in college, she also took a summer internship working as a journalist in China. She first applied on a whim, telling no one, not even her parents, thinking  she wouldn’t get it. She also said she didn’t know any Chinese at the time.

“It was very naive of me, [but] ultimately it was a really great experience,” she said. “Take yourself thousands of miles away from home… and [it] frankly looks great on my resume. How many people have gone to China?” she said.

She worked in the supplements department for the China Daily in Beijing. The supplements genre is essentially advertising in American newspaper terms.

Reiland shared working at a news outlet in a Communist country had its challenges.

“When you work in a Communist country, you don’t have nearly [as many of] the same rights that you have here [in the United States],” she said.

After college, Reiland covered the court systems in both Crystal Lake, Ill., and Auburn, N.Y.  In 2017, she joined the Chicago Daily Law Bulletin as a reporter and is currently the copy editor and features editor there.

“I get to learn something every single day… I get to tell people about it, maybe not with my voice, but with my words,” Reiland said.

She also talked about how different it is to write for lawyers rather than for a traditional newspaper audience.

“With lawyers, they want [the] nitty gritty, …they want it all,” Reiland said. “I’m not a lawyer; I didn’t go to law school…[it’s] definitely not something you pick up in one day. Most lawyers are willing [to help] because [they] don’t want me to get it wrong, so they take the time to explain it.”

With the COVID-19 pandemic, Reiland has been working from home since March and shared what it’s been like to be a journalist during this time.

“We’re just doing what we can– making the best of the situation like everyone else,” she said.

She noted there’s been positives from the experience. For one, journalism has gotten “back to [telling] the stories that need to be told.”

She also said her publication is more focused on digital journalism than ever before, which has allowed her organization to expand its “audience outside the normal bubble [it] reach[es].”

Overall, she pointed out, “Journalism is changing but still staying the same,” as it still comes down to getting to the truth and remaining unbiased as much as humanly possible.