Athletics During A Pandemic: The efforts made to make high school, college sports a reality during COVID-19 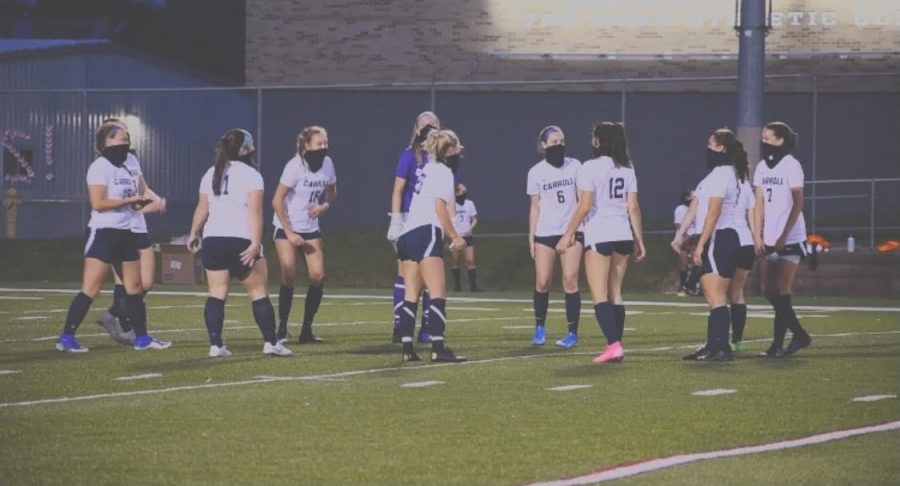 At the National Collegiate Athletic Association Division III level, Carroll University women’s soccer players prepare to play an intersquad scrimmage on Sept. 25 at Schneider Stadium during their COVID-19 training season. Kaitlyn Zanon, a junior at Carroll University, said, “I was excited to play this year because I wanted a sense of normalcy.”

Athletes across the nation have faced various levels of lockdown during the COVID-19 pandemic with every level of sport from high school to Division I athletics having to grapple with what rules and guidelines are necessary to safely allow players to compete.

Kaitlyn Zanon, a junior at Carroll University, plays as a midfielder for her school’s women’s soccer team at a National Collegiate Athletic Association Division III school and is representative of many collegiate student-athletes who are allowed to play according to guidelines defined by their university administrators with input from health experts.

“[The new guidelines] definitely require some getting used to,” Zanon said. “Just like everything in the world, it’s all different than what I’ve been used to, and so some of it seems tedious, but really, in the big picture, they are the reason I get the chance to play.”

While NCAA Division I Athletics has received the most media attention, all NCAA divisions and National Association of Intercollegiate Athletics have come out with different sets of rules to follow as the school year approached or unfolded  in order to allow athletes to have some type of season.

To be able to play this season, the basic guidelines for most schools, no matter the level, included the need to wear masks in athletic facilities, locker rooms and on the field/court, and to stay distant when and where possible.  In certain situations where some athletes have not had to wear masks, student-athletes are regularly tested and trained in small groups for contact tracing if necessary.

In addition to following mask and social distancing regulations, student-athletes in many collegiate environments also had strict protocols in regards to testing procedures.

“We have to wear masks during lifting, practice and warm-ups, but we are allowed to have them off for games,” Zanon said.

Offensive line football coach at the University of Oklahoma (NCAA Division I), Bill Bedenbaugh, was able to coach this year during COVID-19 with similar safety precautions in place for his team as the ones previously mentioned.

Oklahoma’s football team also was separated into different groups while practicing, tested athletes often and required masks. For their team, the rules for wearing masks while playing even switched as time went on with the team eventually deciding to wear masks at all times during and outside of practice unless playing games against other schools.

Coaching during this pandemic was not an easy task to accomplish with high standards of safety, but Bedenbaugh discussed the confidence he had in the school’s safety procedures, saying, “If we followed the guidelines they set forth, we were going to be safe.”

Many DI schools were also testing more often, which enabled them to play multiple games while most DII and DIII schools were restricted to only practicing.

Oklahoma was privileged to play this year with the only exception being one cancelled game during the whole season while Carroll only practiced and played a single  intersquad scrimmage.

But the results were the same regardless of the number of games, and Bedenbaugh described this feeling by saying, “The success this year was being able to play the season.”

IHSA has since announced most sports are eligible to continue under certain safety guidelines and during modified seasons.

Before the news of high school teams being able to play, MHS’s Head Boys Basketball Coach Matthew Badgley said he had to come up with unique ways to keep his team involved with the season as well as with each other.

“Keeping players upbeat and positive” had been a harder task to fulfill when the team could not meet in person, said Badgley, but he searched for ways to accomplish this while preparing for potential safety guidelines and awaiting the announcement from IHSA about when and if basketball would have a season this year.

Badgley showed the importance of perspective in uncertain times by saying he just had an “appreciation of being fortunate enough to play.”

The varsity boys basketball season record last year was 30-4, which was the second time in school history the Mustangs made it that far in the season. It was then cut short by the start of the pandemic. As a result, this year, the team had high hopes for the season.

“We had all of our top players returning for their senior year, so big expectations and the potential for dreams to be achieved was becoming a reality,” Badgley said about having a season this year.

Badgley and Bedenbaugh both had similar experiences in being able to keep their teams active and connected while being safe.

“Keeping everything tight was probably the hardest thing,” Bedenbaugh stated when asked what the most difficult part of coaching this year was.

Having these challenges along with the guidelines that have been put in place to play have not been easy for most.

Sharing the players’ points of view, Zanon said, “That adjustment alone [changes with COVID], with the new guidelines and rules, was very tough and required a lot of time and energy to get myself back to getting what I could under control.”

Even though the changes were not easy for either players or coaches, Zanon, Bedenbaugh and Badgley all expressed an attitude of trying to make the best of the situation.

“We get to train and get better to prepare for future games,” Zanon said.

Zanon also said the COVID-19 situation with sports gave her team an advantage over much of the general population.

“We get to be around people when most people can’t, which really makes the pandemic less bad,” Zanon said.

Zanon’s and the coaches’ responses showed a sense of appreciation about  just having some sort of a season no matter what it looked like, how difficult it was or how late it might have arrived.

Badgely said, “The community of Mundelein has embraced this team and program, and the community needs this bit of excitement and joy.”