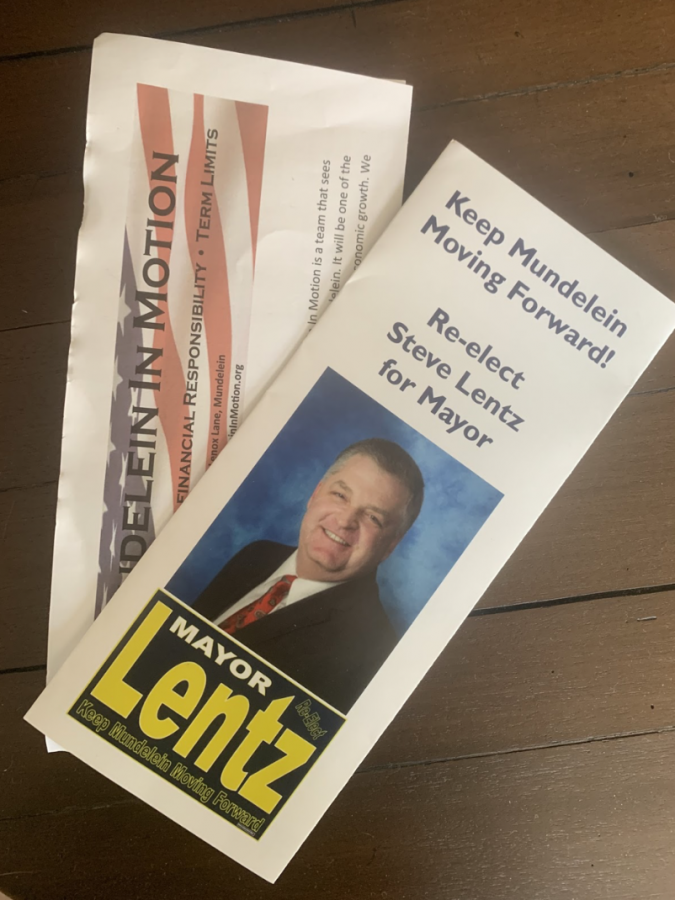 Flyers from Village of Mundelein mayoral candidates have been circulating around town and have been mailed to citizens of Mundelein. Such flyers include those from current Mayor Steve Lentz, whose campaign slogan is ‘Keep Mundelein Moving Forward,’ and current Village Trustee Dawn Abernathy, who is challenging Lentz with support from the local political organization Mundelein in Motion.

With slogans like “Keep Mundelein Moving Forward” or “Mundelein in Motion,” signs of mayoral candidates for current Mayor Steve Lentz and candidates Dawn Abernathy, Robin Meier and Thomas Ouimet can be seen across Mundelein. Although the Daily Herald has endorsed Steve Lentz for mayor, with four candidates running for the spot, the Village of Mundelein could have a whole new leader by the end of today’s election.

Up for re-election is Mayor Steve Lentz. He’s been mayor for two terms and is looking for a third term after narrowly beating out Holly Kim by five votes in the 2017 Mundelein mayoral election. Before he was mayor, he served as a volunteer in Mundelein and as a trustee for one term.

Abernathy has been a trustee here in Mundelein for two terms. Trustee Abernathy plans to create and impose term limits on the trustee and mayor positions in Mundelein in order to give new people a chance while discouraging cronyism– the appointment of friends and associates without proper regard to the candidates and their qualifications. The term limits Trustee Abernathy has proposed would limit the mayor to just two four-year terms and would limit the trustees to three four-year terms.

Trustee Abernathy also said she would work on selling Mundelein as a place where businesses can come while advertising and supporting current Mundelein businesses.

Running for mayor as well is Robin Meier, who is currently a Village of Mundelein trustee.

As stated in an email, her reason to become mayor was that “in spite of progress, there is still dissatisfaction in connecting with residents and businesses in Mundelein who either feel left out or don’t feel they have input into major projects and priorities.”

Compared to Mayor Lentz, she said she “would be more transparent by having important project discussions publicly in the board room and not in one-on-one trustee meetings in private” and “will provide more and varied opportunities for discussions with the residents and businesses where there are question-and-answer sessions, not just video messages or written information.”

If she becomes mayor, she wants to “implement project plans (proposed by Meier 4 Mayor on Facebook) and take action on other plans not yet identified; [she] also wants to strengthen opportunities for local businesses to succeed and support smart development solutions for new developments.”

She also said she plans to be more inclusive with the village’s diverse population, and her top priority is to listen and address people’s concerns directly.

MHS School Board Member Thomas Ouimet is also running for mayor and currently works at Foley & Lardner law firm in Manager Litigation Docketing. Prior to being a member of the MHS school board, he was a member of the Mundelein Economic Development Commission for three years.

As mayor, he plans to unite the taxing bodies, which would include conjoining the Mundelein Park District and other government offices in Mundelein, to work together and accomplish common goals, like renovating old buildings, that will help make Mundelein a more vibrant town.

In regards to the handling of the COVID-19 pandemic, he said, “We have done a great job at MHS with COVID-19, and it was done by working together to understand the virus, implementing a strategy and getting buy-in from everyone. It’s an ongoing issue, and it will require us all to continue to respect each other by listening and working together with a common goal of a healthy and safe future for all of us.”

His ultimate message to the people of Mundelein is that he believes the current mayor and village board don’t work well together, and the village needs a team that works well together so the community can accomplish goals for Mundelein.