Fall Friday Night Lights Are Back! 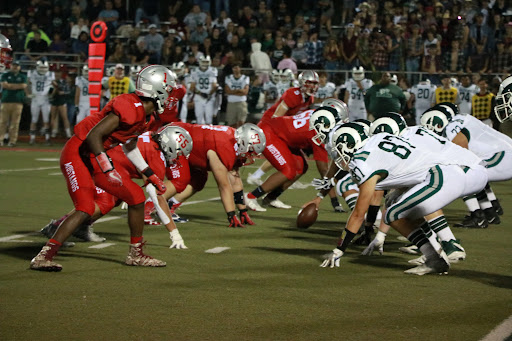 The varsity football team faces off against Grayslake Central High School during the first home game of the season on Friday, Sept. 3.

A big part of high school culture is the Friday night football game. The energetic environment of these Friday Night Light games was one of the aspects of in-person school that many students missed during remote learning, so the football team has set out to start the fall season strong after having a condensed spring season last year due to the COVID-19 pandemic.

The team kicked off the season with an away game against Grant High School on Friday, Aug. 27. With a score of 15-6, the Mustangs walked away that night victorious.

“I think it was great for the guys and the coaching staff to start the season 1-0,” said Senior Brock Paluch, starting quarterback. “The vibes are great at practice, and we know we can do something special with this team.”

Varsity Head Coach Vince DeFrancesco expressed how close the players on the team have grown and attributed their win to the team camaraderie.

“It’s a tight group. We’re excited for this team. They really play an unselfish brand of football, which is exciting for a coach,” DeFrancesco said. “It shows on the field; they really play well as a team.”

Coach DeFrancesco especially praised the seniors on the team, who have shown great leadership on the field throughout the years.

One of those seniors was Paluch, but Paluch emphasized the passion that all the players have for the sport and that even though some players may not get as much recognition, they are still crucial to the team.

“This is the definition of a team; we got a lot of guys that really care about this program and aren’t selfish,” Paluch said. “All players know that some of those unnoticed players have some of the most important roles on the field.”

The team had its first home game on Friday, Sept. 3, against Grayslake Central High School, who DeFrancesco described as a “very good opponent.” In a close game, the Mustangs lost with a score of 34-33.

With COVID-19 restricting the amount of people who could attend the games last season, this game with an audience felt like one of the team’s first true home games in over two years.

During the week of the home game, players and coaches expressed how excited they were to just have a full crowd again.

“It’s going to be a really fun atmosphere. We’re looking forward to our student body really showing up and showing out and giving us a ton of energy. We’re going to feed off that,” DeFrancesco said. “That’s the best part of playing football– having fun with all your friends and family. When you’re able to have that atmosphere, it makes it that much more special.”

Especially with everyone returning to in-person school after an unusual year, DeFrancesco said he wants these football games to help “build the atmosphere” for all the students at school.

“Showing up and supporting us is really going to help us in the long run,” DeFrancesco said. “I think it’s what our school needs right now coming out of COVID and just growing as a school community and really supporting each other. It’s exciting, and we’re hoping to represent Mundelein the best that we can.”

Although the team may have lost its first home game, the players are determined to make this season different from previous ones.

“I’m really proud of the way the team fought this game. When things got tough, nobody folded or gave up,” said Omari Rhinehart, a senior varsity player. “Not the outcome we wanted, but it was a great game nonetheless and shows we are a team that can compete. We have something to prove this season, and I feel like we’re well on our way to proving it.”

After finishing the 2019 varsity season with a record of 2-7, the team wants to prove to the town that they “aren’t the old 2-7 Mundelein,” Paluch said.

Overall, the team is motivated to succeed in future games by pushing through and not giving up.

“I believe if we do our jobs and give it our all every play, we will be really satisfied by the end of the season,” Rhinehart said. “We just gotta keep our foot on the gas from start to finish and keep looking to get better.”