‘Crying in H Mart’ shows us what mothers mean, what we stand to lose without them 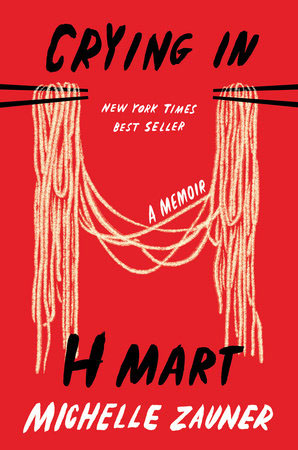 “Crying in H Mart,” the 2021 memoir by Michelle Zauner, cropped up on my reading list in June. It was the same month that Japanese Breakfast, an indie rock band author Zauner heads, released its third studio album, Jubilee, which became one of my favorite albums to come out this summer and led me to discover her book.

“Crying in H Mart” gives insight into the intricacies of fraught mother-daughter relationships and all-consuming grief. A desire to pursue music and a depressive episode she had her junior year of high school fractures Zauner’s relationship with her mother.

“I assumed the seven years I’d lived away from home had healed the wounds between us, that the strain built up in my teenage years had been forgotten.— Now we were closer than ever, but my father’s admission revealed there were memories of which my mother could not let go,” Zauner states in her book.

The rest of the memoir delves into Zauner’s mother’s heart-wrenching six-month battle with cancer and how Zauner navigates life after she’s gone.

“Sometimes grief feels like I’ve been left in a room with no doors,” Zauner writes. “Every time I remember that my mother is dead, it feels like I’m colliding with a wall that won’t give. There’s no escape, just a hard surface that I keep ramming into over and over, a reminder of the immutable reality that I will never see her again.”

Zauner’s writing is straightforward and frank; she doesn’t hold back when detailing the debilitating chemo treatment of her mother or the cruel irony that death can bring.

The book also follows Zauner’s experience growing up Korean-American in small-town Oregon. Therefore, Korean food and culture are a large part of the book as Zauner is half Korean from her mother’s side, so her mother becomes the one that tethers her to her heritage. Zauner, then, finds cooking Korean dishes on her own as a form of counseling since going to therapy after her mother’s death didn’t work for her.

The memoir is titled “Crying in H Mart” because, after her mom dies, Zauner would cry in Korean supermarkets overwhelmed by the smells that reminded her of cooking with her mother:

“We’re all searching for a piece of home or a piece of ourselves. We look for a taste of it in the food we order and the ingredients we buy. — H Mart is where your people gather under one odorous roof, full of faith that they’ll find something they can’t find anywhere else.”

Readers’ throats will be closing up from the minute they pick up the book to when they put it down. As a result, “Crying in H Mart” gets 5 out of 5 stars for its gripping and intimate portrait of grief, culture and mother-daughter relationships. The writing is accessible, and Zauner never keeps the reader at arm’s length as this memoir will make readers want to cry, cook and hug a mom.