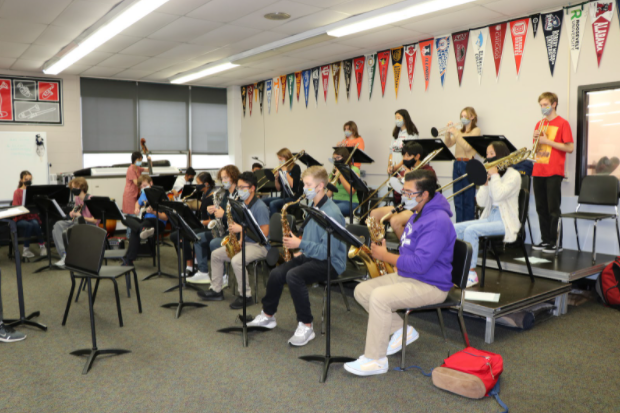 During second period, Honors Jazz Ensemble plays through a new song “Small Note Boogaloo” for the first time in preparation for a December performance at the prestigious national-level Midwest Clinic. “We have prepared tremendously by rehearsing every day,” Sophomore Everestt Correa said. “We are powering through each song we're given to prepare for The Midwest Clinic.”

With the year in full swing and a performance already behind them, the Honors Jazz Ensemble has ultimately been working to prepare for a December performance at the prestigious national-level Midwest Clinic.

The Midwest Clinic, held annually in Chicago, usually has 18,000 participants representing all 50 states and over 30 countries. This is the first year the Mundelein Jazz Ensemble will be attending.

“We have been preparing for this performance since we held a jazz camp this summer in June,” Andy Sturgeon, band director, said. “It’s been great having students practicing and playing together daily as they [did] before the pandemic.”

This week-long camp was a way for the band to begin preparing their 10 songs for the clinic. The students were able to have both sectional and full-band rehearsals, said Sturgeon.

The band is also preparing for upcoming performances by “working on various tunes during [the band’s] class period,” working with members of their sections and working with professionals, Sturgeon said.

Additionally, the band is using fall performances as preparation for the Midwest Clinic, too.

On Sunday, Sept. 12, Jazz Ensemble had its first performance of the year at Nellie’s, a tavern in Palatine. The last time the jazz band performed here was in 2019. Only a select few students, such as Senior Ella Kasamis, were at that previous performance.

“At the Nellie’s performance two years ago, I was brand new to this jazz band, but now I’m one of its longest-playing members,” Kasamis said. “Overall, I was incredibly excited for this performance and satisfied with how it turned out.”

Sturgeon also noted this was the first time in four years that the Nellie’s concert was sold out.

“Sunday was one of the best performances I’ve been in,” Neil Martin, junior, said. “The crowd was very interactive, and they gave the band a lot of energy by being very supportive.”

The band’s next concert on Wednesday, Nov. 3, will be held in the MHS Auditorium at 7:00 p.m. Along with the Honors Jazz Ensemble, Mundelein’s Jazz Orchestra, Warren Township High School’s Jazz Ensemble and guest artist Kirk Garrison, trumpet player, will be performing.

“It’s going to be a blast hearing [all the musicians] perform that night, and I’m looking forward to our students getting to hear other outstanding high school musicians make music,” Sturgeon said.

Although it won’t be played at the Nov. 3 concert, “No Hay Palabras” is a favorite tune of the band’s as it is also one of the 10 songs being prepared for the Midwest Clinic, was written a few years ago and was published last month.

“Jazz Ensemble will premiere the piece this December at The Midwest Clinic,” Sturgeon said. “Next month, we will be welcoming Michele Fernandez, the composer, from Miami to work with our students on the nuances of the music.”

Back in March 2020, the Jazz Ensemble submitted recordings for the clinic as part of the selection process. Because they found out they were selected in the middle of the pandemic, though, the band could only celebrate virtually.

“It was rather underwhelming,” Sturgeon said.

This year, two Illinois high school bands have been selected to perform: MHS’s Jazz Ensemble and Lockport Township High School’s Wind Symphony. Sturgeon said the last two times an Illinois band has been selected were in 2016 and 2018.

He also said, “Being selected to perform at the Midwest Clinic is a high honor.”