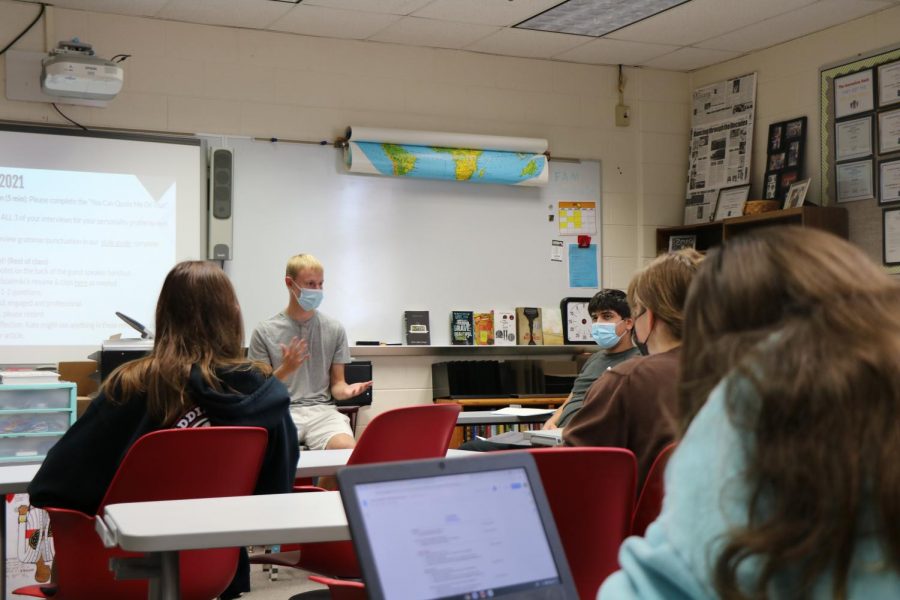 MHS alum Ben Szalinski talks to student journalists about his new experiences in becoming a journalist as a guest speaker in an A-wing classroom on Oct. 1.

Ben Szalinski, alum from the Class of 2017, joined student journalists in third period on Oct. 1 to explain his journey into journalism, stating what journalists do “is important to people” and that a journalist “can have a lot of cool experiences along the way.”

Szalinski, who joined The Mustang as a sophomore and was a sports editor his senior year, described to the class how he “wasn’t sure about what he wanted to do in college” but thought it might have something to do with journalism.

Now, Szalinski works as a reporter for the Northwest Herald, located in Crystal Lake, where he covers county government and several municipalities.

In comparing his time on The Mustang to his current job, he said, “[The time of] putting the newspapers together and creating stories, it’s the exact same thing.”

He clarified that the workload is different since he has to write at least one story every day.

“[The job] gets a little more intensive and a lot more work with having to go find people to talk to,” he said, adding, “There is a lot more pressure on your stories since a lot of people read them and may be upset with your work.”

While pursuing his bachelor’s degree, he also worked as a writing intern for the U.S. Department of Veterans Affairs, VSFS program, in which he wrote profiles on veterans for Veteran of the Day tributes and collaborated with government staff regarding other story topics.

He then went on to be a marketing intern at the Illinois Policy Institute in Chicago where he researched and developed storylines about Illinois corruption and fiscal policy while also creating visual aids to analyze economic information.

While pursuing a masters, Szalinski worked as a statehouse reporting intern for the State-Journal-Register, located in Springfield. As an intern he was part of the PAR program internship in which he reported on all areas of Illinois politics and in-depth legislative issues and wrote original stories about how these policies affected people’s lives.

“As a journalist, your job is to hold public officials accountable, so scrutinizing what they do is really important,” Szalinski said.

But he also said, “[Journalists] don’t expect to find [corruption]; [they] don’t look to find it,” [but journalists] can always be aware that there may be this deal that’s going on that violates the rules, policy, the law, so it is always something to watch out for.”

He also shared his experience covering events at the state capitol when news broke in January of 2021 that State Democratic Representative Mike Madigan had stepped down as Speaker of the Illinois House.

“There were several journalists who were waiting for politicians to go into work so we would get an answer for what they felt from them [about the news], and one of the Chicago Dems came over and went on talking about how great Madigan is, [but] lots of Democrats hate him, and I told her that much [via a question], and she lowered her glasses and gave me that death stare.”

Ultimately, she was “very upset that I asked that question and dared to insult the speaker’s intelligence and her intelligence.”

Now as a reporter at the Northwest Herald, Szalinski writes a variety of articles, sometimes even articles that might not be that exciting, but he told aspiring journalists that even those stories are  “part of the job” and that they “still have to make an engaging story that the reader is going to click onto.”

The advice he gave for writing exciting stories included the following: “Constantly think about ideas and look up whatever you think is interesting and take opportunities to cover stories that you like; [this] will keep you away from covering stories that you may not like as much.”

Compared to his previous internship as a Statehouse Reporting Intern, Szalinski described his internship as “pretty similar” to his current job because his last internship was “a full journalism job.”

“It was exactly what I do now– just different places and different people,” he said.

He also expressed a similar thought about studying journalism in college.

“When you study journalism to get these internships, they are really putting you in the position to be able to succeed as soon as you start your real job,” he said, and added, “There was no difference between finishing my internship and working at my current job. I thought I was well prepared.”

At his current job, Szalinski has dealt with backlash from readers who have read some of his articles. He described how “it is easy to ignore because you already know the reader has an opinion” and that “sometimes the reader assumes that [a journalist] write[s] a story that makes one side look bad, and they may assume that [the journalist] had an opinion that that one side is bad.”

But he reminded the journalism students that the job of a journalist is to remain as objective as possible and to just put the multiple perspectives about a topic out to the readers.

“You have to believe that what you are doing is fair, and just have confidence in yourself,” he said.

He also noted why he loves his role as a journalist.

“You get to be a part of the world and not just a passive observer of the news,” he said. “You are the one that makes the news.”