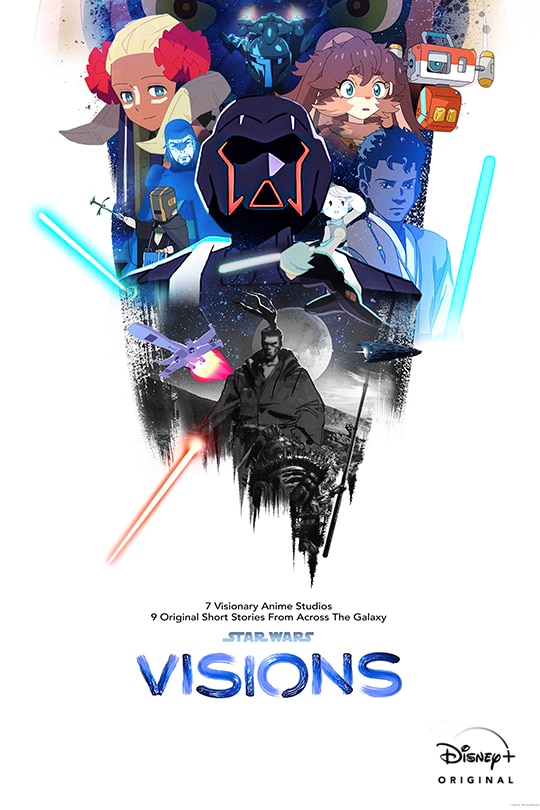 Released on Disney+ on Sept. 22, “Star Wars: Visions” is a nine-eposide anime series loosely covering aspects of the Star Wars Universe. About the show, Emanuel Cortes, senior, said, “I said to myself, ‘Oh no, I really don’t like this, and I don’t think I will.’ But once I saw the show and saw all the cool animations that anime does, and I’m thinking, ‘Wow, am I missing all of this?’-- but not just in Star Wars, but on other anime shows. This changed my perspective on anime. I have more respect toward it, and I think people should think the same.”

Star Wars has been around for 44 years, with “Star Wars: Episode IV – A New Hope” releasing on May 25, 1977, in the U.S. Throughout this nearly 50-year period, the series has taken a variety of forms; “Star Wars: Visions,” however, is the first Star Wars anime. The show takes the raw concept and universe of Star Wars and removes it from the restrictions of its own lore and style to make thrilling and original bite-sized stories from it.

The show was released on Disney+ on Sept. 22, and all of its nine episodes were released at once as opposed to one episode a week, as was done with shows like “The Mandalorian.”

“I like how all of these episodes were released at once just because I get to see all of them the same day and not have to wait a whole week for a new episode,” Emanuel Cortes, senior, said.

“We really wanted to give these creators a wide creative berth to explore all the imaginative potential of the Star Wars galaxy through the unique lens of anime,” stated James Waugh, executive producer of the show, at “Anime Expo Lite,” the digital version of Anime Expo, in July. “We realized we wanted these to be as authentic as possible to the studios and creators who are making them, made through their unique process, in a medium they’re such experts at.”

Since each episode has an unique style of animation and design, the visuals of the show are absolutely stunning with fascinating character designs and beautiful environments, but the fight scenes are particularly well done– specifically the fight at the end of the third episode, “The Twins” by Studio Trigger, for its sheer epicness.

Every episode is its own short film, typically around 15-25 minutes long and mostly set in a period in the Star Wars universe but not as connected to the lore of that period as most Star Wars content usually is.  For example, the sixth episode “T0-B1” takes place after “Star Wars: Episode III – Revenge of the Sith” but does not connect with any established characters during that time.

A variety of different “Jedi” are the main characters in each episode, and they go through various situations, usually ending with an epic showdown.

“I do like that they made new characters but kind of have some similar stuff from the Skywalker saga, which makes it ten times better,” Cortes said about the originality of the show. “Plus, I would like to see more new things in Star Wars, and now that we got new characters, it makes everything better knowing we are getting new stuff and not just content from the Skywalker saga.”

One especially unique episode is the second one titled “Tatooine Rhapsody,” where a former Jedi is a member of a band headed by a relative of “Jabba the Hutt.” Their leader is taken away to be executed for not joining in on the family business but is given amnesty after the band impresses Jabba with a performance.

Another great episode is “The Ninth Jedi,” the fifth episode in the series where seven Jedi are invited to a planet where the mysterious  “Margrave Juro” has offered to give them all lightsabers made by a smith on the planet who’s daughter becomes involved in the plot. The twist and unique designs of the characters shine especially strong.

The seventh episode, “The Elder,” has a master and his “Padawan ” investigate a dark side disturbance while patrolling the Outer Rim. The characters really stand out in this episode. Specifically, the relationship between the Padawan and Master is very well-written and entertaining to watch.

“Our story is not directly connected to any of the characters from the films, but it explores the idea of the Jedi Knights and the master and padawan dynamic in an older setting,”  stated Masahiko Otsuka, co-founder of Trigger, the studio which made “The Elder,” in a July Tokyo press conference according to IGN, a website that focuses on gaming, film, television, comics and tech.

The show takes the very basis of Star Wars and takes it in an exciting new direction. Even if viewers have never watched anime and don’t think they would like it, they should give “Star Wars: Visions” a try because it’s fresh anime-inspired take on the beloved franchise will enthrall many.