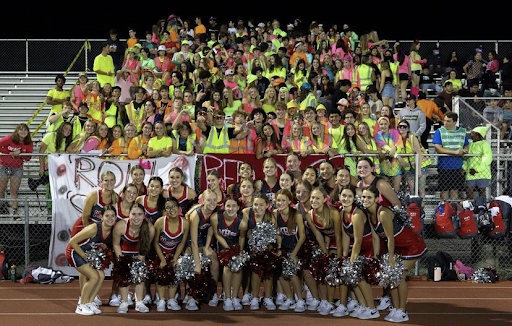 Senior Grace Stanley and the Mundelein student section support the football team on Neon Night at a game against Lake Zurich High School.

It’s Friday Night, and the energy is high in Mundelein. Cheers can be heard down the street as students, staff and community members gather under the school’s stadium lights. The student section is as loud as ever with those in attendance dressed in the theme for the night, and one of the people responsible for helping to create such an atmosphere at each home football game is Senior Grace Stanley, one of the Mustang Red Rage Leaders.

“[Red Rage] brings the whole student body all together, and I feel like it’s really important to have something like that,” she said. “There’s so many of us in the school, and seeing everyone in the stands at night cheering on the same team is really good to see.”

Red Rage is a school spirit group that organizes crowds at sporting events. In the fall, the group focuses on football as it’s the sport that draws the most fans into the student body section during the fall sports season.

“Our kids love feeling supported by their peers,” Head Varsity Football Coach Vince DeFrancesco said. “So, I think it really elevates [the football team’s] energy. It excites them and makes them play with more purpose than they already do.”

Coach DeFrancesco and his team are motivated on the field by the work that Stanley and the other Red Rage leaders do to show school spirit at events like football games.

“It was one of the most exciting things I’ve heard,” Offensive Linebacker and Receiver Monte Alemu, senior, said about having fans back in the stands for games. “During the COVID season, it wasn’t the same. After you make a big play, you don’t hear anyone really cheering for you. The environment is just different.”

Stanley is not only in charge of getting students involved in school spirit, but also supporting the football team. Playing a sport, as Coach DeFrancesco and some of his players describe, is so much more motivating when the players have someone to play it for.

Stanley also brought to light the importance Red Rage holds for her, especially coming back to in-person learning after remote and hybrid learning last year due to the COVID-19 pandemic.

“Since we were on lock down– for how many years?– the seniors, I feel like, are the only class to have an actual Mundelein experience, so by being a Red Rage leader, I feel like it was my role to pass down the traditions and to teach underclassmen what they need to carry on,” Stanley said.

Stanley added she views Red Rage as a tradition that is passed down from class to class in order to carry on school spirit. Stanley herself was even motivated to do Red Rage because of her older sister who graduated from MHS.

“My sister was a Red Rage leader…. I was really happy about [getting picked],” Stanley said. “I love all the school spirit that’s involved with it.”

Stanley is a part of Red Rage not only to inspire the school’s athletic teams but also to unify the student body around the concept of school pride.

“I feel like Red Rage is just the name for the whole student body itself,” Stanley said. “In the student section, it’s not just one person; it’s the whole section.”