‘The Song of Achilles’: The rise of a modern classic 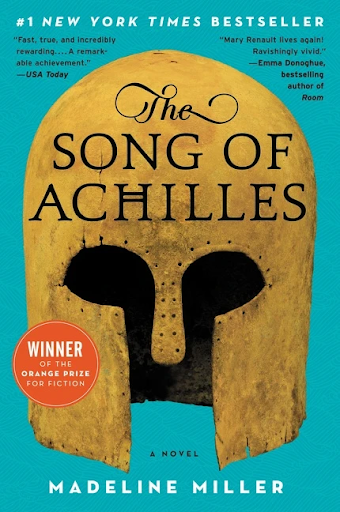 This year, 2021, marks the 10th anniversary since the release of “The Song of Achilles,” which won author Madeline Miller the Orange Prize for Fiction in 2012.

Madeline Miller’s “The Song of Achilles” is a modern retelling of “The Iliad” that has made waves in the reading world, having grown in popularity recently for the attention it has received on social media.

Based on the classic Greek myth, Miller’s interpretation of the story surrounds the relationship between the “best of all Greeks” Achilles and his childhood companion, Patroclus. Told through the point of view of the exiled prince Patroclus, readers receive a unique perspective on the story, particularly with regards to the presumed romantic relationship between the two. Miller was motivated to share this alternate perspective during her post-graduate schooling– this would become her inspiration to write “The Song of Achilles.”

“Books and poetry were a lifelong haven for me, and I had been writing since I was a child,” Miller said in her article “Madeline Miller on The Song of Achilles: ‘It helped people come out to their parents’” published by The Guardian on Aug. 27. “I even wrote a contemporary novel while in college, but everything came out anaemic, spiritless. Until, that is, I realized I could write about the thing I was most passionate about: Patroclus’s story.”

As she began to write “The Song of Achilles,” Miller said she had doubts regarding how her interpretation of the story would be perceived, particularly by the academic community.

“I feared that my classics peers and professors would hate the idea,” Miller said in The Guardian article. “There is a long history of gatekeeping in classics. Attempts to expand the lens of scholarship have sometimes been met with open hostility.”

Miller had seen the perspectives of women and people of color within the academic community dismissed in particular areas, which was a reason for the uncertainty she had regarding the story’s reception.

“A young woman taking the revered and traditionally male epic material of the ‘Iliad’ and centring it as a gay love story might not thrill people,” Miller said in the The Guardian article.

Miller’s reservations didn’t stop her from following through with the story she was so enamored with– a story that also resonated with readers of all kinds who found themselves engrossed in the story of Achilles and Patroclus.

“I think what resonated with me was the love and bond that Achilles and Patroclus shared as well as how the author expressed the passage of time in the book,” Remy Loerakker, senior, said. “The book is not only a retelling of a myth, but a story of two boys growing up in Ancient Greece. The author shows how the characters navigate the society around them as well as how the characters grew up and came to terms with how their society perceived them.”

The coming-of-age tale comes to a head when the story shifts to depict Achilles and Patroclus’ involvement in the Trojan War. The story illustrates the pressure Achilles faces– being expected to lead the siege and fulfill his destiny as “Best of all Greeks.”

“One of the main themes of this book is the legacy that people leave behind once they pass away and how that legacy is tied to a name,” said English Teacher Alexander Kapotas, who also teaches a mythology course. “We study names and their meanings frequently in mythology class. The memory of one’s name can live long after they pass, and tying a legacy to one’s name through heroic deeds could lead to immortality.”

The book has risen in popularity dramatically since it was released ten years ago, as TikTok users have been spreading the word about Miller’s work. “Booktok,” as it is colloquially known, is a community of avid readers and writers within the social media platform who have become known for sharing book recommendations with viewers. “The Song of Achilles” is a mainstay on many creators’ lists of their all-time favorite books.

Many readers on TikTok and beyond have emphasized just how great of an impact the book has had on them and the intense emotion and heartbreak they felt as a result of the intimate storyline.

“This book was heart-breaking. It was emotional and raw and real, and it just makes you feel so much,” Averi Obispo, freshman, said. “The excellent character building makes it all the more emotional because all the characters feel like they’re alive, and you get so attached to them.”

With an epic, historical plotline and profound character development, this beautifully written book is nearly impossible to put down. The novel never received the criticism Miller originally anticipated, as she has garnered recognition from scholars and everyday readers alike. Above all, the impact of “The Song of Achilles” will stick in the minds of readers for years to come– the mark of a novel with the potential to become a must-read classic.

“In the decade since it was published, I’ve been honoured to hear from readers who put excerpts in their wedding vows, who made quotes into tattoos, who taught it in their classes,” Miller said in the The Guardian article. “My fears about a classical backlash never came to pass; the classics community has been wonderfully supportive. I’ve heard from people who said it helped them come out to their parents and others who said it inspired them to get their PhDs or to start their own novels. Every writer wants their book to have its own life, but I never in my wildest dreams imagined that my Achilles and Patroclus would get to have such a rich and rewarding one.”