Back from COVID, Back to Victory: An MHS robotics team wins finals game in Batavia tournament 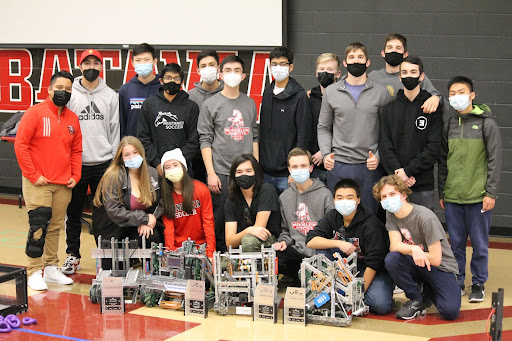 Members of all four participating MHS robotics teams pose with their robots and awards at Batavia High School after a Nov. 21 tournament in which MHS team 499S Noisy Boys took first place.

An MHS robotics team won a robotics tournament that was held at Batavia High School on Nov. 21. The team, known as 499S Noisy Boys, won the final game 103-64 against two other MHS teams. Four MHS robotics teams participated in total, with three of them getting to the finals game. The teams collectively also won one excellence award, two finalist awards and one champion award.

“[Winning] was very exhilarating, especially after last year not being able to compete,” Raymond Hogea, a senior member of 499S, said. “It was definitely a good feeling being able to come back this season and win another tournament and qualify for state again.”

This is the second time this year that MHS robotics teams have participated in a traditional robotics tournament where four robots compete at a time in alliances of two. Last year, due to COVID-19 restrictions, the teams had to participate in virtual competitions.

“[Robotics participants last year] essentially had to either record their entire performance or compete against other schools simultaneously via a webcast,” Emmanuel Aldana, the sponsor of the Robotics Team, said.

In the first tournament of this season, which was held in Metea Valley High School on Oct. 31, one of the MHS teams, 499M Megamind, got to the finals in the tournament. In the final game of the tournament, 499M was allied with another team called Vortex. However, they lost 123-63 against an alliance composed of the team’s Orange Mambas and Nitro, according to robotevents.com, which is the website of the Robotics Education & Competition Foundation.

“It was pretty disappointing,” Jill Kennicott, a junior member of 499M, said. “But for the first competition back, getting second place was pretty awesome; it’s been a while since we competed in that format.”

Before the Batavia tournament, 499M practiced and rebuilt their entire robot in an effort to make it better. They also practiced driving a lot as it is a vital part of competing.

“We’ve just been doing a lot of practicing and revising our build and making sure it’s in tip-top shape for the next tournament,” Caleb Beversdorf, a junior member of 499M, said prior to the Batavia tournament.

The team participated again in the tournament at Batavia High, and again got to the finals. But they were defeated by an alliance of which one of the teams was an MHS team.

“I’m very satisfied with our performance in the finals,” Freddy Song, a junior member of 499M, said. “Of course, obviously losing is always going to [be disappointing], but we performed the best against the team we were against….we showed some improvement, our driving got significantly better, same with our building, programming, etc.”

One of the issues that the team faced during the final match was a malfunction that occured in their alliance partners’ robot, which happened when that robot clashed with another robot in an attempt to gain control of a mobile goal– portable seven-sided objects that robots move to earn points.

“From there, it was a very hectic game…. We were mostly on defense trying to get as many goals onto our side as possible and taking as many from their side, and they were trying to do the same,” Song said. “It was a very physical game– lots of contact.”

Now the team is exploring pneumatics, the usage of compressed air for motion, for their robots in order to make the motors move faster.

One of the winners of the Batavia tournament was 499S Noisy Boys. In the previous tournament at Metea Valley, the team had made it to the semi-finals but was defeated 162-98 in a match against the same alliance that defeated Megamind in the same tournament.

“For the start of the season, [we did] pretty good,” Hogea said prior to the Batavia tournament. “I think it gave us a really good indication of where we are compared to the rest of the [competition] that [we have] here in Illinois.”

At the Batavia tournament, in the final game, the team was allied with 355V Orange Mambas, and they won against the opposing alliance, composed of two MHS teams, which included 499M and 499H Propel. This means that 499S has advanced into the state competition of VEX Robotics.

Hogea, a member of 499S, described how in the final match, the MHS teams focused on countering their opponents’ strategies but did not focus enough on 499S’s alliance partner.

“The MHS teams we were against knew how we played, and we still managed to execute [our strategy]; our alliance partners really made the difference….” Hogea said. “While the other robots were focused on countering our platforming, [499S’s alliance partner] were just able to move really fast, grab goals and put them on the platform.”

Another team that participated in both tournaments was 499H Propel. In the first tournament, the team scored eighth place in the qualification part of the competition and got eliminated in the tournament after losing a match 96-60.

“[Getting eliminated] was a bit disappointing since we had been preparing for a while now,” Steffen Brown, senior and captain of 499H, said prior to the Batavia competition. “But we learned a lot that we are going to carry over to the next competition, and I feel confident that we definitely have a strong chance at winning one of our regional competitions this season.”

In the tournament at Batavia, the team got to the finals but lost; however, out of the 10 games 499H participated in at that tournament, that was the only one they lost.

“Truth be told, it felt amazing just getting that far…. For me, it was the first time I’d ever reached up to this level,” said Hussain Razvi, a junior member of 499H.

“It was a really close match; I think the alliance [499]S chose from a different high school was quite strong, so it was a really tough fight from the beginning,” Brown said.

In order for teams to participate in tournaments, they have to have a functional robot, and making one can be a long process that usually includes various design stages, such as planning, building a prototype, testing, programming and more.

“The hardest part [of robotics] would probably be the design,” Beversdorf said. “There’s so much to think about in the games, like you have to be within a certain size limit, [and] you have to think about how other teams will combat your strategy.”

Even after the main structure of the robot is completed, the robots are usually adjusted after the tournaments to make them better, so the process of editing the robot is continuously going on all through the season.

“Starting from May of last year we started designing the robots, and we’ve been doing improvements on it as we compete,” Sponsor Aldana said. “After every tournament, we revise the design, and we continue to improve on that robot until March essentially.”

With many of the Robotics Team members in their senior year, the club will still welcome any aspiring new students. The team meets in A02 on Mondays after school with many members and teams scheduling additional practices throughout the week for more prep time.

“If you’re interested in robotics, [we] are always excited to welcome new members,” Brown said. “Especially next year, we’re going to have a lot of seniors who are going to be moving onto bigger things…. We’re going to need a strong new base of really inspired and motivated engineers to join our Robotics Team for the following years.”