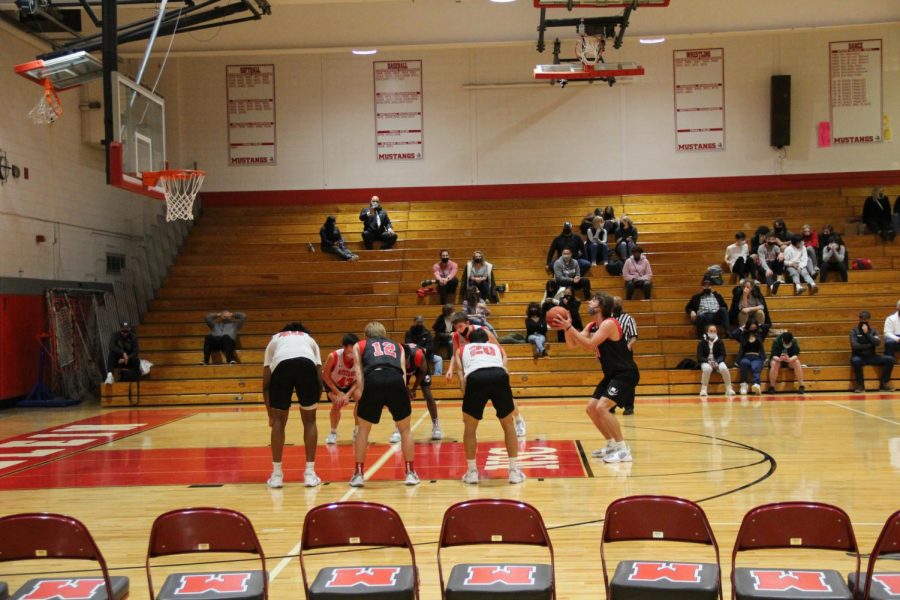 The boys basketball team had a breakout season last year even with the COVID-19 safety regulations in place, which earned the team a regional championship. This year, the team looks to build off last season, despite the graduation of some key players last spring.

Varsity Head Coach Matt Badgley said, “Losing players from that 2021 class is certainly a change,” but he also said he is excited to experience what the team is and what the players can become this year.

“I believe our team can be strong, competitive and tough,” he said.

But he acknowledged that rebuilding the team is a process.

“We will need some time to become one unit, but when this group starts to ‘click,’ I think they can see what they are truly capable of being,” he said.

Varsity Player Brock Paluch, senior, described the impact that last year’s key players, such as Connor Enright and Trey Baker, had on the floor.

“We gave teams second-chance shots; it wasn’t the end of the world because Connor or Trey could just run down the court and hit a three-pointer,” Paluch said

But now Paluch and other seniors are looked to as some of this year’s key team leaders.

“This season offers the seniors of Tyler Moenning, Brock Paluch and Omari Rhinehart to stamp their version of success on our program’s history through the same tough, competitive fighting that is Mundelein Basketball,” Badgley said.

Paluch described his excitement for the upcoming season.

“[I am excited] to be able to play a full season since last year we only got 16 games as a Top 5 team in the state, so it was kind of disappointing,” he said.

Paluch also recognized how he can make an impact on the court this year for his team.

“I need to play good defense, get rebounds and limit second-chance opportunities for other teams,” he said.

The varsity boys basketball team also has added fresh faces to the team, including Freshman Derek Bishop. Bishop explained the difference in team environment with this team and other teams he has played on in the past.

“It’s definitely very different from the other teams I have played on due to me never playing at the varsity level,” Bishop said, and also added, “But with the help of my coaches and teammates, it helps make it a lot easier on me.”

Badgley noted that MHS plays in one of the toughest conferences in the state, so the team has already “challenged [themselves] early with home games versus Evanston, Notre Dame and away games of North Chicago and Lake Park.”

Paluch said he was eager to travel to “Collinsville over winter break where [the team] will play some very good teams from Southern Illinois” and was also excited about “games [the team will] play against Stevenson or Libertyville– since the stands will be full.”

Bishop also noted his excitement for the upcoming game this week against Evanston High School.

“Nobody thinks we can win because Evanston is a very good team, but I believe if we compete the way we can, we can pull an upset,” he said.

With a run of 43-6 over the past two seasons, Badgley said a significant miss for the team last season was “to play in front of our student body.”

He said, “[Although] we were fortunate to be able to play in front of parents, it’s so much more exciting and fun for our players to compete for our school in front of their cheering peers.”