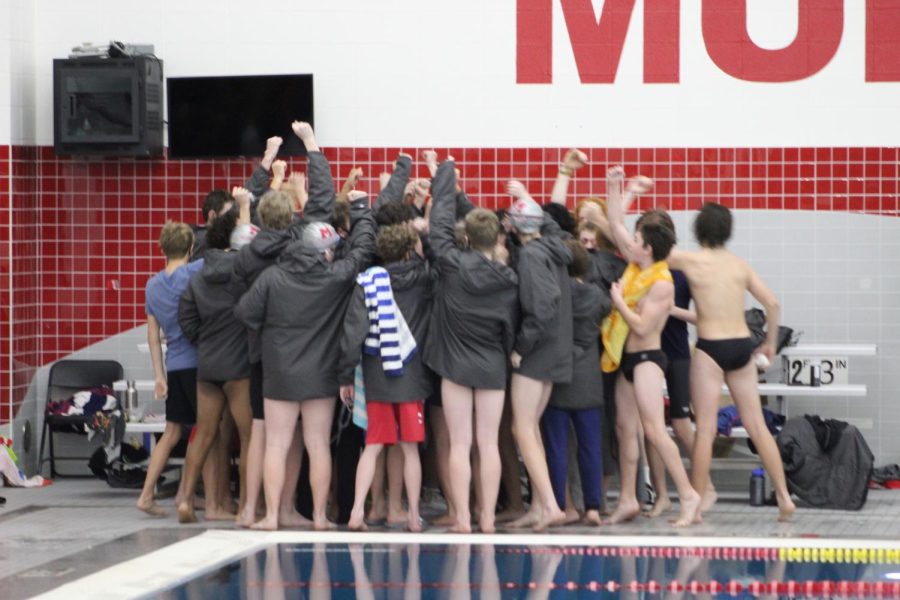 The boys swim & dive team huddles up for a traditional cheer before the start of Senior Night at a home meet against Warren Township High School on Thursday, Jan. 20.

With an undefeated season record so far and a third-in-state ranking, including individuals and relays that have swimming times currently in the state’s Top 10, the varsity boys swimming & diving team has not just returned to the sport with a mostly normal season but has returned to it successfully.

Head Varsity Coach Rahul Sethna describes what it has felt to have a “normal” swim season compared to last year when winter sports had to go on an adaptive pause because of a rise in COVID-19 cases at the end of 2020.

“I think anything is better than last season where we stopped, [we] didn’t know if we would even have a chance to compete, and then [we] became an afterthought to fit in,” Sethna said.

Despite the obstacles of last season, Sethna noted last year’s swimmers made up one of the “deepest teams we have ever fielded here.”

“At the virtual state meet [last year], we were 13th and won the Lake County conference for the first time all in an abbreviated season,” Sethna said.

As the team heads into championship season this year, Sethna turned his focus onto the present goals.

“On a global team level, we have a chance to be the best team in school history and finish in the Top 5 in the state,” he said, also stating, “In terms of goals, we want everyone to finish with personal best swimming times, diving scores and [to] be the best version of themselves.”

In his last season as a part of the boys swim & dive team, Senior and Captain Aaron Anastos explained his mindset heading into championship season after “coming out of a pandemic and having to look forward.”

“Our mindset has [been] to take nothing for granted and to appreciate the fact we simply get to be with each other this season in a mostly normal way,” he said.

“My mindset is really to focus on the little details in practice,” he said.

Willis noted the team “put in the work at the beginning of the season and now it [was] just maintenance and fine-tuning.”

“This season has been interesting because we’ve been trying to recover our mojo from before COVID-19,” Willis said. “We’ve worked so hard, and the coronavirus was a big disruption, but I think we’ve been doing a great job trying to return to some normalcy while still being careful.”

Anastos described the team chemistry as the glue that has held the team together “even with graduating many people from last year and adding a bunch of new faces” this year.

“We’ve been able to adapt and keep our strong chemistry,” he said.

He added the team chemistry was built on being able to bring back some traditions from pre-COVID-19 days, including going out to eat after every meet and bleaching each other’s hair for championship season.

Despite these bonding activities, Willis noted there are some traditions that have not yet returned. He particularly mentioned missing pasta parties.

“During my freshman year, we used to have parties at people’s houses before meets, and it was one of my favorite things about the sport because you could hang out with your teammates outside of the pool,” he said.

While not all aspects from the past have returned, the team remains focused on the future records that can be set as long as the season continues to run as normally as possible.

“This year’s team is built for championship-level meets,” Sethna said. “We have a chance to finish the highest we ever have at the state meet, so we are hoping we stay healthy and can swim/dive and that the state meet runs.”