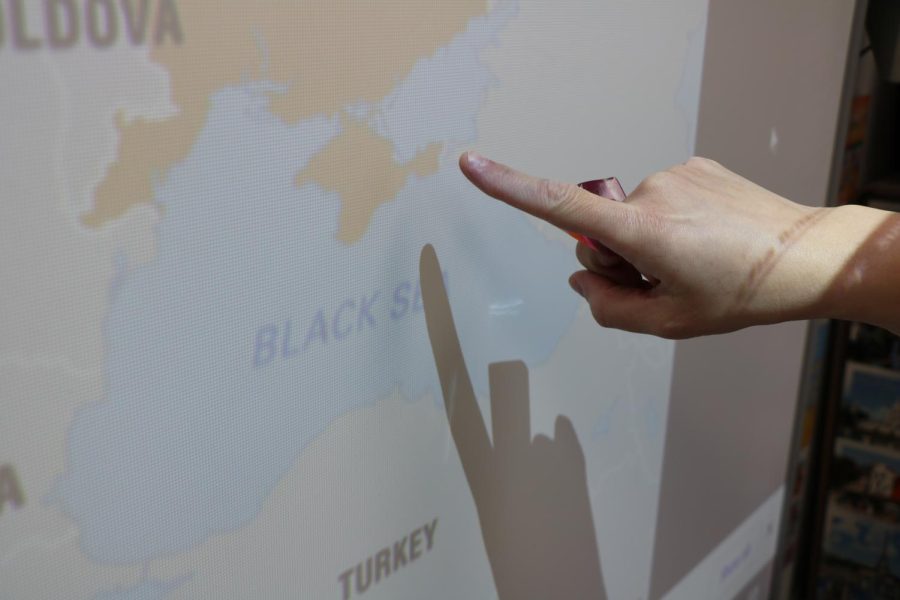 Social Studies Teacher Susan Theotokatos points to Crimea on a map of Ukraine. While the peninsula was invaded by Russia in 2014 and annexed by it, almost no countries recognize this. Social Studies Teacher Neil McCarthy said about this past conflict, “[President of Russia Vladimir Putin] has invaded before, but in a very sneaky, stealthy way. He took the Crimea and then said [of those who invaded], ‘These are not my soldiers,’ right after the Olympics, the Winter Olympics of 2014, so he’s done it before.”

As of Jan. 21, Russia has gathered about 100,000 troops on its border with Ukraine, reported U.S. Secretary of State Anthony Blinken. Eastern parts of Ukraine have also been under the control of Russian-backed Russian separatists since 2014. Additionally, Russia invaded and annexed Crimea from Ukraine in 2014, which also has Russian troops stationed there.

However, there is a massive difference between amassing troops on a border and actually invading. Social Studies Teacher Neil McCarthy does not think Russia will actually do it.

”The short answer is still no, I don’t think [President of Russia Vladimir Putin] will. He’s really smart, and I don’t think he’s that dumb to do it. It’s not worth it,” McCarthy said.

If Russia did attack Ukraine, it would likely instantly face huge economic retaliation from the EU and U.S. and maybe even military action.

Social Studies Teacher Thomas Kuhn explained Putin’s reason for all this military action despite a low likelihood of actually attacking.

“It’s a possibility, but not likely,” Kuhn said. “This is what they call saber rattling, which is using your military to appear forceful and drum up the support of your people, which seems to be more [of] what Putin is doing than actually intending to attack.”

Putin has lots of reasons to drum up the support of his people– one being that despite Russia’s size, its GDP is rather low, being less than Italy’s. Despite this fact, it is still 11th in global ranking.

McCarthy elaborated on why Putin needs to improve his approval in Russia.

“His foreign policy here is really all about domestic policy,” McCarthy said. “He knows that he is growing in unpopularity because of COVID-19; he’s been there too long. He is cracking down on human rights organizations…, and so, he needs to distract– ‘Squirrel! Look over there; don’t look at me.’”

By invading Ukraine, Russia would secure its western border, and while Ukraine is not part of NATO, support in Ukraine for Ukraine joining NATO has risen since the Russian invasion of Crimea in 2014.

“Basically, Putin is saying that NATO and the U.S. have reneged on a deal they made with then Russian president Boris Yeltsin regarding NATO membership of former Soviet Block eastern European nations since the fall of the [Soviet Union] in the early 1990s,” Theotokatos said. “The reassurances were given to Yelstin that NATO would not invite countries/republics that were part of its Soviet Union as NATO members because that would leave Russia’s borders with western Europe too bare and open.”

Putin also wants to show the world, and Russia especially, that Russia is still the superpower it was during the years of the Cold War. Putin is not a communist, however.

“Strategically it would start to rebuild that old Soviet Empire, which you know consisted of about 19 republics, and when it was broken up, everyone had their own independence,” Kuhn said. “So, Putin’s just slowly trying to grab some of those under his influence and expand the old Soviet Union.”

Russia also sees Ukraine as an integral and rightful part of Russia as opposed to an independent state with an unique identity.

McCarthy described the Russian view on Ukrainian versus Russian culture as this: “If you ask a Russian, they’re the same.”

Theotokatos explained further the ethnic similarity between Ukraine and Russia.

“[Russia and Ukraine] are both Eastern Orthodox Christians, and their language is from the same language family,” she said. “They eat similar foods and have similar climatic experiences; however, there are always cultural nuances and differences.”

Ukrainian opinion on whether or not its citizens have their own ethnic identity is different.

“I would have said 10, 15 years ago they’re basically the same because there is that common ethnicity and heritage,” Kuhn said. “But, as I’ve had more Ukrainian students and more Russian students, I’m realizing that they’re vastly different– like Ukrainians want that independent identity, and that goes back far beyond the Russian Revolution of 1917.”

With that said, though, even Ukraine itself has some internal division on the matter.

”Since 1991, the breakup of the Soviet Union, obviously nationalism has been on the rise, and especially the western half of the country, which is indeed more Ukrainian-speaking and more western-oriented, those people truly feel ‘Ukrainian’ whereas more the east side tend to still say they’re Russian,” McCarthy said.

Russia views Ukraine as a fundamental and essential part of itself. McCarthy explained how Russia feels about Ukraine increasingly aligning itself with the West as well as its independence in general.

”Would Americans accept Texas being part of a Soviet Sphere? So, the equivalent is, of course, is Ukraine? Russians view Ukraine as always part of who they are; it’s part of their identity.”