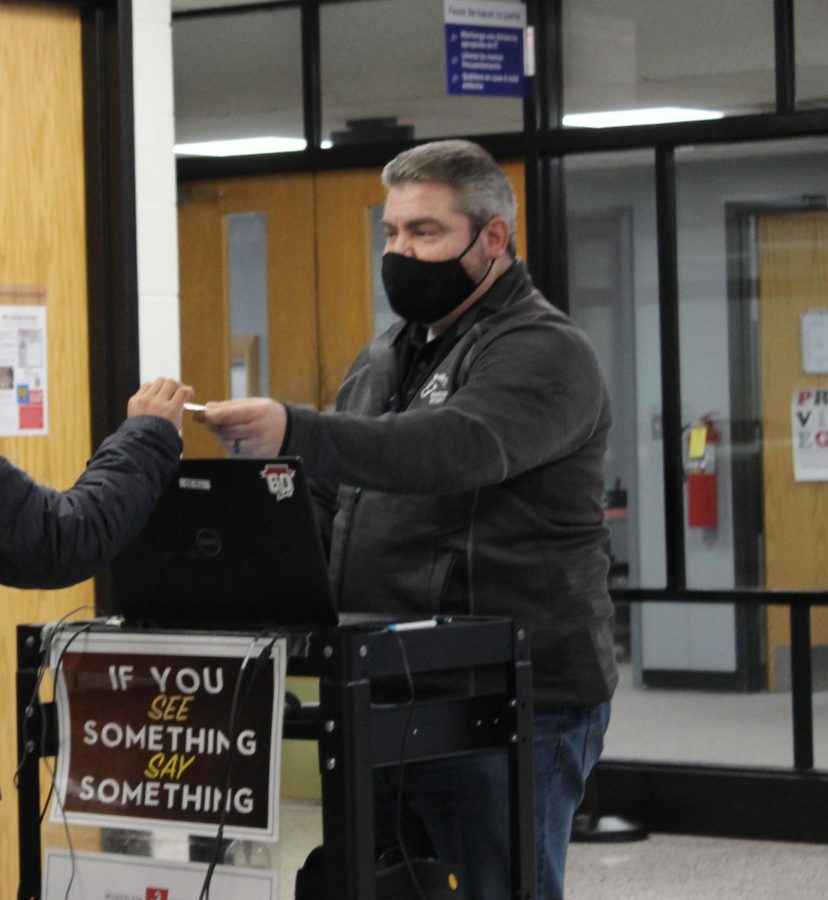 Near the Attendance Office on Friday, Jan. 21, students check into school after the first bell of the day using their plastic student IDs or the electronic Hero app on their smartphones. MHS started utilizing the Hero app during the 2018-19 school year when current seniors were freshmen. The goal was to further encourage attendance in class. Now in the 2021-22 school year, MHS proposed another electronic pass system, which was met with criticism from school community members.

A number of different procedures and policies have made their way through MHS over the years– some stick; others don’t. The most recent procedure introduced to students regarding a paperless pass system was met with backlash from students and other school community members.

Students were sent during their health and wellness credit period to the Auditorium last month, where Assistant Principal Mike Pope and a dean of students showed students a presentation that consisted of less than ten slides with content that was meant “to reteach some of the expectations of the building that I think we were missing [in the] first semester,” Pope said in an interview.

The presentation included slides detailing social media expectations, off-campus privileges, lunch/free period privileges and the new concept of e-hallpasses. This last part is what created a buzz among the student body.

While some students recognized the intent behind the presentation and the new e-hallpass policy was supposed to be good, that intention wasn’t necessarily made as clear as it could have been.

“[Administration] didn’t communicate the idea that it was to enforce a healthy, disciplined student body and rather made it seem like it was primarily for control purposes,” Junior Abygail Ray said  to the question, “What is your opinion on the new policy?” in a survey posted to students through several social media accounts on Jan. 18. More than 20 students responded.

When first hired, Pope asked around to figure out what staff considered to be one of the most pressing problems at MHS as he wanted to focus on what could be improved right away.

“It was tardies,” he said about what he found out. “Kids were just all late, halls were slammed and busy during the class periods.”

From working with this e-hallpass company in a previous school, Pope said he thought it would be a great solution to the number of tardies.

“Any time you introduce something new to students like this, they’re going to think you’re taking something [away] from them,” Pope said in an interview.

But Pope expressed good intentions behind the initiative, citing concerns about knowing where students are at all times for safety reasons and thinking the e-hallpass was supposed to be a solution to a problem identified by the staff– it would allow student movement to be tracked more accurately than paper passes do, and it potentially would reduce the time it took to fill out paper passes by teachers. The e-hallpass would be an online website that students log into themselves to fill out the pass, and then teachers would approve the passes from their own computer on their end.

“I didn’t expect this level of people being upset about asking you to have a pass in the hallway, which is what schools have done for, well, forever,” Pope said.

But students didn’t seem as bothered about the reason behind the new pass system as they were about the logistics of the process.

Senior Marcus Gallegos responded to the same question in the survey as Ray by stating, “I understand that these new passes are supposed to keep people from wandering around as best as they can, but the accessibility and use of the e-passes don’t seem convenient at all.”

Some aspects of the new pass system that students took issue with included having to sign into the electronic pass system on a website on their own personal smartphones. Questions also arose about what students should do if they don’t have a phone or are in a part of the building that doesn’t have good cell service.

When asked such questions during one of the presentations, Pope said students would need to use their Chromebooks even if that meant taking them into the bathrooms.

Several students disagreed with that idea, saying it sounded unsanitary.

“Bringing your Chromebook, something we as students are constantly using and touching, would just spread more germs because, out of all of the places in the school, the bathroom [seems] the least clean place during an active school day,” Senior Callee Smith said in the survey.

Yet, part of the reason the electronic pass system was introduced was to reduce the amount of germs spread between teachers and students through a physical paper pass.

“We actually [weren’t] issuing passes first semester [during the COVID-19 pandemic] because we didn’t want people  to touch things, and that was the whole point of not having passes,” Pope said in an interview.

Some students also took issue with some of the additional policies that came with the proposed e-hallpass as these additions were seen as disruptive to their normal routines. For example, the new expectation that students must stay in limited locations during their lunch and/or free period reduces their access to school resources.

In the survey, Freshman Sydney Olorvida said the presentation “mentioned only being allowed in two places for lunch, and you can’t get up and leave to walk in the hallways. For people in the Fine [& Applied] Arts Department, especially band and choir, we use lunchtime to use the practice rooms, and this would stop us from being allowed to be down in D03 or in the choir practice rooms.”

Additionally, students said they felt as though they were being punished for other students’ bad behaviors, and English Teacher Jim Drier acknowledged this student concern when interviewed for a staff perspective on this new pass system.

“If we have– which we do– students who want to not be in class and avoid what they should be doing, then we need to deal with them directly,” he said.

Other students felt the pass system showed a lack of trust between administration and students, which they believe may only create more friction and misbehavior.

“By restricting our movement and refusing trust, our staff fails to create a constructive relationship with students, and as a result, students are less likely to listen and learn from staff,” Senior Charley Tovar said in the survey.

Some of the staff expressed similar ideas.

“If we cannot trust students to take care of themselves, I think policing that is fraught with a perspective that we can’t trust students, and I would rather operate from the assumption that we can trust the majority of students,” Drier said.

For many students, it is clear that, overall, MHS administration and staff care about their students’ well-being, but the way in which they chose to express that through the roll out of the electronic pass system resulted in student pushback.

“I know some kids didn’t like it, but it shouldn’t have been so worrisome if you weren’t doing anything wrong,” Senior Blianca Hurtado said in the survey. “Just deal with it. High school isn’t forever, and the new policy won’t hurt you a couple years from now. It’s not really a big deal.”

Administration acknowledged the criticism received about the new system in an email sent to parents the week following the introduction of it. The email explained why MHS decided to push back the start date of implementation.

“Dear Mundelein High School parents and guardians: We have heard your feedback in regards to the new Ehallpass system for Mundelein High School and decided not to implement the new system at this time,” stated the email from Principal Dr. Anthony Kroll. “There were a lot of questions and concerns voiced by both parents and students regarding the Ehallpass. We apologize for any confusion. While the Ehallpass is still a viable alternative to traditional hall passes, it won’t be successful unless everyone has a clear understanding of the system before it is implemented. When we do move forward with it, we will provide advance notice to you, our students and our staff.”