Jazz band reminisces on past performance 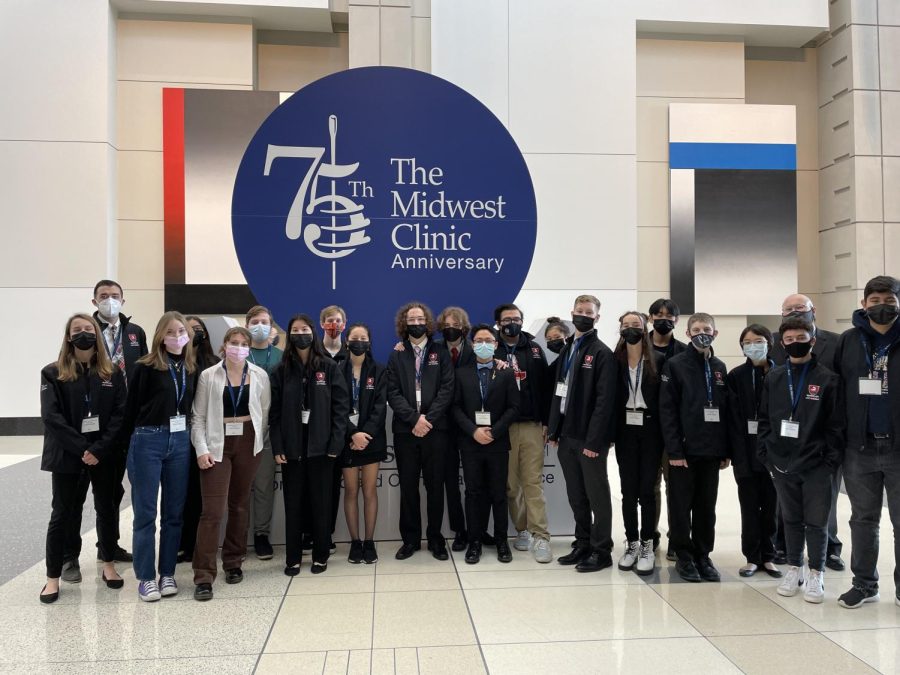 Jazz Ensemble stands in the atrium of McCormick Place on Dec. 16 before its performance at the 75th annual Midwest Clinic in Chicago. “The Midwest Clinic was really fun,” Senior Ryan Escobar said. “We got to perform in front of musicians from all over the world. It was great to be able to play in front of such a supportive audience.”

After preparing extensively throughout the first semester for the Midwest Clinic, members of Honors Jazz Ensemble reflected on the event.

On Dec. 16, Mundelein’s Jazz Ensemble performed at the Midwest Clinic in Chicago, an annual music conference which hosts around 18,000 participants from all 50 states and over 30 countries. This was the first year the MHS Jazz Ensemble attended the conference.

On Monday, Nov. 8, before its performance, the jazz band worked with composer Michele Fernandez, who wrote “No Hay Palabras,” one of the songs the band performed. Fernandez worked with the students on “the nuances of the music,” Andy Sturgeon, band director, said.

“The process of playing together as a group is such an important aspect to her philosophy, so I think it was just important for her to feel like she was as connected to the music as we were connected to the music,” Sturgeon said. “She could share what was the story behind why she wrote the piece and then also just have a chance to work with our students on it.”

Some students, like Chloe Langford, freshman, were “super nervous leading up to the performance,” but afterward were “proud of what [they] had accomplished.”

“Although it was a prestigious, high-pressure performance event, everyone in the audience was either a musician or a music educator who was there to help you learn and grow and support you in your music-making,” Langford said. “Everyone listening to you was there to help you, and once I realized that, it made playing a lot more fun.”

The Honors Jazz Ensemble didn’t just perform at the event; the students also got to walk around the Midwest Exhibition, where, according to Junior Leila Moon, an array of instruments, merchandise and more were on display. College representatives from schools with music programs were also stationed around the exhibition hall.

Moon noted how the Midwest Clinic was “like a musical supermarket.”

“No matter where you went, you learned something about the musical world: either a new instrument, a new piece of musical technology or how to sound a certain way (if you watched [the] performances),” Moon said.

Most people, like Moon and Langford, left the event with new perspectives on performing. Sturgeon left with a new sense of gratitude.

“I was really pleased with the fact that we were able to do [the conference] in the past two years where everything’s been touch-and-go due to COVID-19 and with high numbers [of COVID-19 cases] coming [in] mid-December,” Sturgeon said. “I had a lot of gratitude that we were able to perform; we were able to have an audience there that was excited about hearing the performance and giving really great, positive feedback and energy back to our performers.”

Sturgeon also said how his biggest concern leading up to the Midwest Clinic was the health of the band and how “the minute [he] saw the 20th member of the 20-member jazz band arrive at 6 a.m. [when they were scheduled to depart for the clinic, he] felt relieved.”

With the Midwest Clinic behind them, the jazz band members had performances at the Purdue Festival on Saturday, Jan. 22. Then, the band has performances scheduled at the Mundelein Jazz Invitational in March and will work with Composer Steve Wiest to create recordings of his new music in April.