‘Ted Lasso’ is the heartfelt sports comedy you’ve been missing 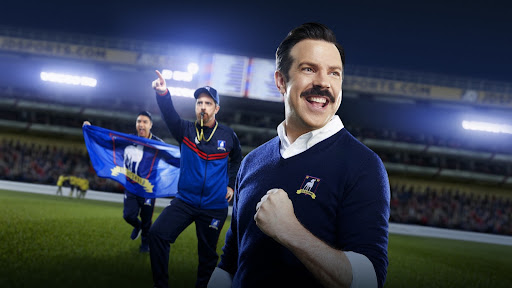 Seasons 1 and 2 of “Ted Lasso” are currently streaming on Apple TV+. Season 3 is set to release in 2022, as the streaming service renewed the show for both seasons 2 and 3 back in October 2020.

Apple TV’s show “Ted Lasso” follows a fictional American collegiate football coach Ted Lasso (Jason Sudeikis) taking on his new role as the manager of a Premier League soccer team in England. The comedy depicts the obstacles and pitfalls of Lasso’s experiences from culture shocks to the navigation of new relationships within the team– not to mention the fact that he has no soccer experience whatsoever.

While the first season of the Apple original show debuted in 2020, the show’s leading character has existed since 2013. Lasso was first introduced after NBC teamed up with Sudeikis to promote its coverage of Premier League soccer. The video titled “An American Coach in London: NBC Sports Premier League Film featuring Jason Sudeikis” has racked up more than 18 million views on YouTube since its release in 2013. Lasso has made several follow-up appearances in NBC Sports media as the public has become enamoured with the character’s personality and happy-go-lucky attitude. The concept evolved from a short promo, then, into a full-fledged Apple TV show and has become one of the biggest draws to the young streaming service.

The series begins as Lasso is brought in by team boss Rebecca Welton (Hannah Waddingham) to replace the current coach. Her true motive for bringing Lasso into the team is revealed to viewers soon after– she wants to see the club, previously headed by and beloved by her ex-husband, destroyed.

From the time that Lasso and his assistant coach, known simply as Coach Beard (Brendan Hunt), land in England, the odds are stacked against the American newcomers. As the now head coach of the fictional AFC Richmond team, Lasso faces pushback from his new players and relentless criticism from soccer fans and the media for his incompetence in the sport.

When Lasso takes the reins of the club, the club is facing relegation and has a problematic team dynamic. AFC Richmond’s biggest names, the up-and-coming star Jamie Tartt (Phil Dunster) and veteran captain Roy Kent (Brent Goldstein) are at odds throughout the first season– with much of the conflict stemming from Jamie’s ego and disrespectful treatment of other players and team management.

As Lasso uses his unique strategies and hopeful attitude to try to unite the team and bring out the results of which the players are capable, he is blissfully unaware that Rebecca has been working against him in order to sabotage the club. Even as Lasso faces all these issues, he stays true to his optimistic disposition, and his infectious personality and enthusiasm begin to win over the media, his team and colleagues. In spite of being hired to tear the team apart, it seems that Lasso is just what AFC Richmond has needed all along.

“Ted Lasso is a glass half-full individual, so there is a comedic touch to his approach to coaching soccer at the professional level, handling player situations, his understanding or lack of understanding of the game of soccer, and his mentality toward the different types of situations that come up throughout the show,” Math Teacher and Boys Head Soccer Coach Sebastian Falinski said.

The show is filled with light-hearted comedy and endearing personalities– there’s a character that every viewer can relate to and laugh along with. Fan favorites include the bold, driven Keeley Jones (Juno Temple), the “furious softie”– as Apple TV+ describes him on the site– Roy and the warm-hearted defender Sam Obisanya (Toheeb Jimoh).

“Ted Lasso’s” characters may be beloved on their own, but they truly come to life as the relationships between and among them develop and change. The relationship between Nathan Shelley (Nick Mohammed), the club’s bashful kit man, and Lasso exemplifies this, as Lasso takes him under his wing and gives him the opportunity to become more involved with the team. The friendship that is developed between Rebecca and Keeley embodies this mentor-mentee approach as well.

“The game of soccer is about the relationships, and that’s what the show really delves into– the relationships that are built and how to sustain those in a real way that impacts people in a positive manner,” English Teacher and Assistant Boys Soccer Coach Mike Dayton said.

The second season delves even deeper into the development of the characters, their personal struggles and their relationships with others. In doing so, the show is able to expand on important themes which may be relatable to viewers.

“I believe the first season drew so many people in because of its heartwarming positivity and at a time when something like that was needed,” Business Teacher and Head Swimming & Diving Coach Rahul Sethna said. “I think the second season, while expanding on that, goes in a little different direction where mental health, forgiveness and being able to find your own happiness become part of the story.  I think a show which is grounded in sports yet instead is using it as a larger metaphor for life and struggle resonates with a larger audience.”

The series has been received with open arms by the public and critics alike, as “Ted Lasso” earned 20 Emmy nominations in 2021 and won seven of those categories, including Outstanding Comedy Series. With its heartfelt message, feel-good comedy and exceptional cast, “Ted Lasso” is a true must-watch for sports and non-sports lovers alike.