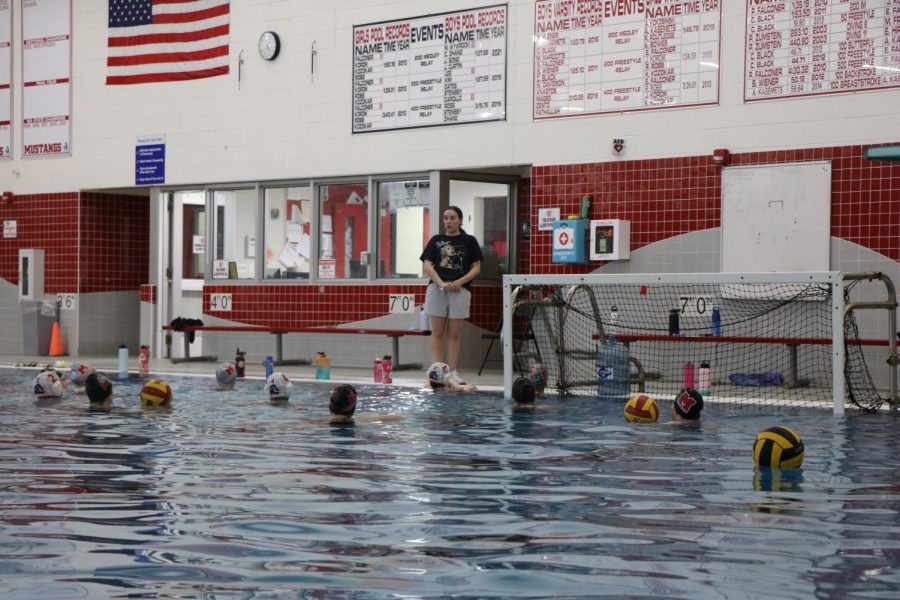 Heading into the 2022 water polo season, as reflected in many other sports this school year, the season is finally ‘normal’ after two years of abnormal seasons given the COVID-19 pandemic.

Varsity Head Coach Amanda Boothe shared her excitement about being able to work alongside her sister this year.

“We played polo together in high school and college, and now we get to coach together, [so] it feels super full circle,” she said. “I really trust her opinion and judgment when it comes to the game, and I think she will bring a lot to the team.”

Now, in her first year as varsity head coach, Boothe explained that she looks forward to water polo season because “[she] love[s] getting to see the team each day.”

“We’ve got a great group of girls this year, and we always find a way to work hard during practice while having fun,” she said.

Boothe also described goals for this water polo season in and out of the pool.

“Our goal for this season is to do better than we did the previous season,” she said. “Last season we were out of the first round of sectionals, [so] we’d like to make it to that final sectional game.”

Boothe also added that the biggest challenge the team will face this water polo season is confidence.

“Last season we graduated a lot of our starting line; this season some girls are going to need to step up,” she said. “All the girls are talented, and they need to learn to believe in their abilities, and I am hoping I can help them see their talent.”

She also discussed what the team faces outside of the pool.

“We need to have trust in our teammates, and we get that trust from having a strong bond,” she said. “I am also very adamant on the girls having respect for one another.”

Senior and Captain Lauren Geary’s goal for the team this season, then, is “to focus on being one unit in and out of the pool”.

“Team bonding has always been a part of our program, but we’re really trying to become stronger together in the water this season,” she said.

“I hope we’ll be able to have pasta parties and just do more fun stuff as a team like we used to,” she said. “One of my favorite parts of MHS aquatics that separates us from other teams is that we’ve always been so close and have always been just a family to each other, so it’ll be fun to be able to do those things again together this year.”

Sophomore Kristina Spada noted the tradition she was most excited about this season: “the pasta parties we have before games.”

“At the pasta parties, the team is able to bond outside of the pool and eat good food,” she said.

The team not only looked forward to the pasta parties but also the competition; Boothe highlighted some of the teams she is excited about this season.

“Libertyville [High School] and Lake Forest [High School] have always been good competition for us; they’re both strong teams,” she said. “Every team we play we try not to overlook [because] anything can happen, and it’s important for us to get our minds right before every game.”

After the last two years without tournaments for the water polo team, Geary explained her excitement of being “able to go to tournaments and enjoy travel and do more fun things with [her] team,” and one of those tournaments includes the Glenbrook North invite.

“I remember my freshman year we won this tournament and played a lot of competitive teams, but it was just a really fun tournament,” Geary recalled.

“In the past, Stevenson has been better than our team,” Spada said. “If we train and give it our all in that game, I think we will have a fighting chance.”

Spada added that to be able to succeed in competing against Stevenson, she believes that “everyone on the team has their own roles, but my defense will help the team to win games and go far this year.”