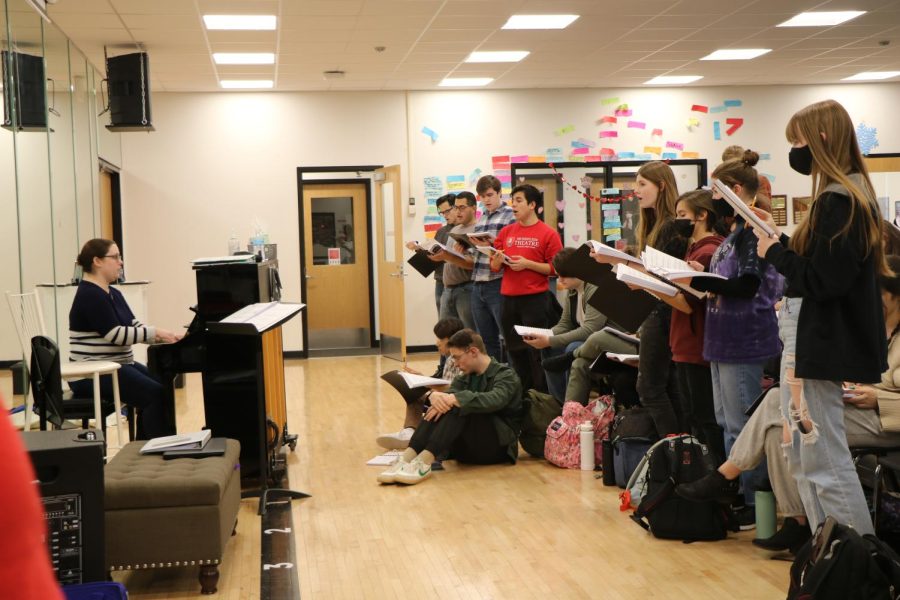 “The Addams Family” cast members work on the music for the spring musical with Choir Director Stevee Bellas on Thursday, March 10.

After a three-year hiatus due to COVID-19, Mundelein Theater is back to putting on a live, in-person spring musical. This year’s show? “The Addams Family.”

“[The spring musical] is unique within [the theater] program,” Jonathan Meier, director of theater, said. “It’s always our largest and most complicated production, as it involves acting, singing and dancing, as well as having a live pit orchestra.”

Meier added that, because of COVID-19, the 2020’s show “Guys and Dolls” was canceled, and the 2021’s show “Working: The Musical” was filmed in the school’s North Courtyard and then streamed for viewers.

Junior Will Gonzalez, who will be playing the role of Gomez, noted how the last “full-fledged” musical to be put on in-person was the 2019 performance of “Sister Act.”

Gonzalez also stated how he’s “super excited” to do another full musical with costumes, pit music, a moving set, and “most of all, an audience.”

“Everyone is thrilled to be back in rehearsal indoors and [thrilled to be] performing in April in our Auditorium,” Meier said.

Starting out as a cartoon strip in 1938, “The Addams Family,” which is about a family interested in the macabre, was adapted for television and film from the 60s to the 90s and finally turned into a Broadway show in 2010.

“I am super excited for ‘The Addams Family’ because it offers comical relief while still having a great message about family and love for each other,” said Senior Addison Salski, who will be playing the role of Morticia. “There are great dance numbers, which are my personal favorite.”

Salski said she is also looking forward to working with others, such as with Senior Eli Walter, who will be playing Lucas.