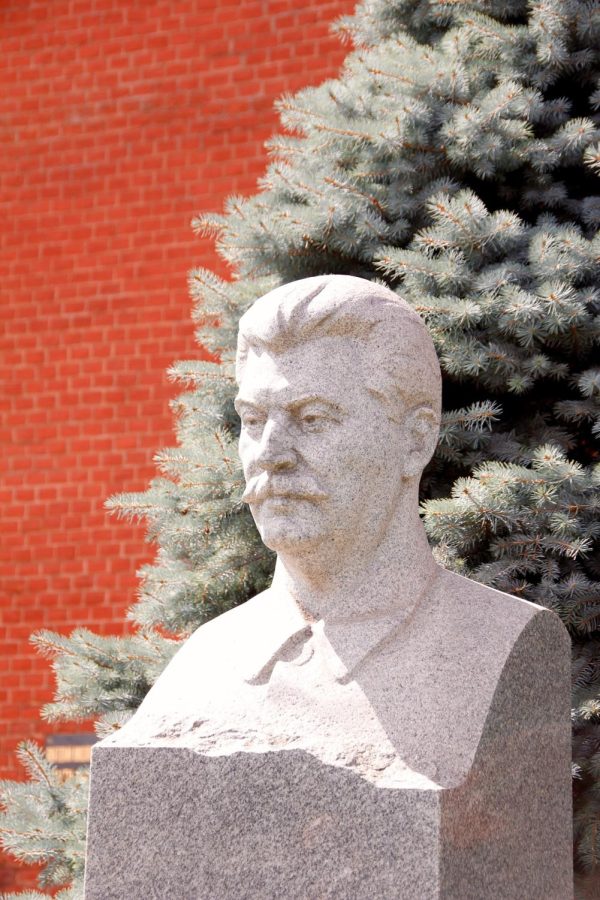 Image courtesy of Pixabay; to view a copy of this image’s license, please visit Pixabay License.

A bust of Joseph Stalin marks his grave in the Kremlin Wall in Moscow. Susan Theotokatos, social studies teacher, described the way Stalin ruled: “In the classic sense he was a dictator-- he was a totalitarian ruler by all accounts, ruled by terror, took out anyone who he deemed a threat--- any one who would have opposed him, controlled media and messaging, expanded the secret police and encouraged citizens to spy on each other.”

Joseph Stalin (born Loseb Dzhugashvili) was General Secretary of the Communist Party of the Soviet Union from April 3, 1922, to his death on March 5, 1953. This year marks the 100th anniversary of Stalin gaining this key position, which led to his rise to power in the Soviet Union.

Stalin was born in the town of Gori, Russia, (now Georgia) on Dec. 18, 1878. In 1900, he joined the political opposition in Russia, instigating and joining strikes and demonstrations against the government. Stalin joined the Bolshevik party led by Lenin and was even arrested multiple times before his eventual exile to Siberia in 1913 because of his criminal activities.

“He was very clever; early on in the Bolshevik party, he was the muscle basically,” Neil McCarthy, social studies teacher, said. “He was the guy willing to go assassinate, rob banks, rob trains, to raise money for the Bolsheviks in 1917 when the revolution got started.”

With the outbreak of the Russian Revolution in 1917, Stalin returned from Siberia and participated in the coup against the provisional government that same year. As the Russian Civil War began to wrap up in 1922 and the Soviet Union took hold, he was appointed as General Secretary in 1922, a position which allowed him to hand out jobs to his political allies.

As Lenin began to suffer from strokes in 1922, Stalin began ruthlessly taking out his opponents in the party and consolidating his power through skillful political moves.

“[He came to power] by being smart and clever and outwitting his competition within the party and befriending Lenin himself, and basically he got rid of any competition in being the next in line after Lenin’s death,” Social Studies Teacher Susan Theotokatos said.

Leon Trotsky was one of Stalin’s main rivals, a rival Stalin had ousted from Russia in 1929 and eventually had assassinated in 1940 when Trotsky was living in Mexico.

“So everyone thought it was probably Trotsky who was going to replace Lenin because [Trotsky] was more popular; he was head of the army, but Stalin was very good behind the scenes.” McCarthy said.

By the late 1920s Stalin ruled the Soviet Union essentially as a dictator. He worked to rapidly industrialize the largely agricultural nation of Russia through various policies and plans. Stalin also started his Gulags, which were labor camps for his opposition.

He also had a policy of collectivization where farmers gave up their personal farms and went to work on large farms with others.

“By forcing thousands of farmers into farm collectives, killing and sending others to work camps does not necessarily create cohesion in a country; the economy was ‘well enough’ but never anything stellar,” Theotokatos said. “Most Soviets had to wait in lines hours deep to get miniscule basic products throughout the Soviet era.”

Despite these problems present during Stalin’s rule, it is also important to note Stalin’s act of industrializing the country.

“But obviously as far as bringing them from an agricultural to an industrial society and fulfilling the dreams of Karl Marx, I think that part would be a success,” Social Studies Teacher Thomas Kuhn said on Stalin’s efforts in Russia.

Yet, Stalin also caused the Holomodor in 1932-33, a mass famine in Ukraine, which is estimated to have killed 3.9 million people, through his policy of collectivization.

Starting in 1934 Stalin began his Great Purge against members of both the communist party and the military as a response to an assassination of a party member, which he may have actually arranged.

Stalin, then, ruled through absolute fear and constant paranoia.

“Even the people who are closest to him, his most loyal lieutenants, ended up dead,” McCarthy said on the way Stalin ruled.

He is estimated to have deliberately killed about 6 million, according to historian Timothy D. Snyder, who specializes in Eastern and Central Europe. He is also the Richard C. Levin Professor of History at Yale University and a permanent fellow at the Institute for Human Sciences in Vienna.

Stalin also painted himself as a legend of sorts, with a mythos surrounding him and his past.

Stalin also played a major role in the Second World War, during which he led the Soviet Union against the Axis powers and aligned himself with the Allies.

”We tend to view WWII as we are the heroes, and in many ways we were…Normandy and D-Day is an amazing achievement, and island hopping in the Pacific and pushing the Japanese back, all of that is just remarkable history, but in many ways, I don’t think we would have won WWII with the Soviets on the other side [with] the Nazis,” McCarthy said on the Soviet Unions role in the war.

McCarthy, however, criticized Stalin’s intitial response to Nazi Germany’s breaking of the Soviet Union and Germany’s non-aggression pact by their invasion of Russia in 1941. Stalin was reportedly so shocked by this, he entered a state of inactivity.

”Your country is being invaded by the greatest war machine in world history, and you do nothing for ten days,” McCarthy said.

After he died on March 5, 1953, his successor, Nikita Krushchev, began a process of de-Stalinization in the Soviet Union.

Sixty-nine years since his death, historians acknowledge Stalin’s rule as having moments of effectiveness, yet they also note it was achieved through utter ruthlessness and brutality. He rapidly industrialized his country, but at the cost of millions of lives.