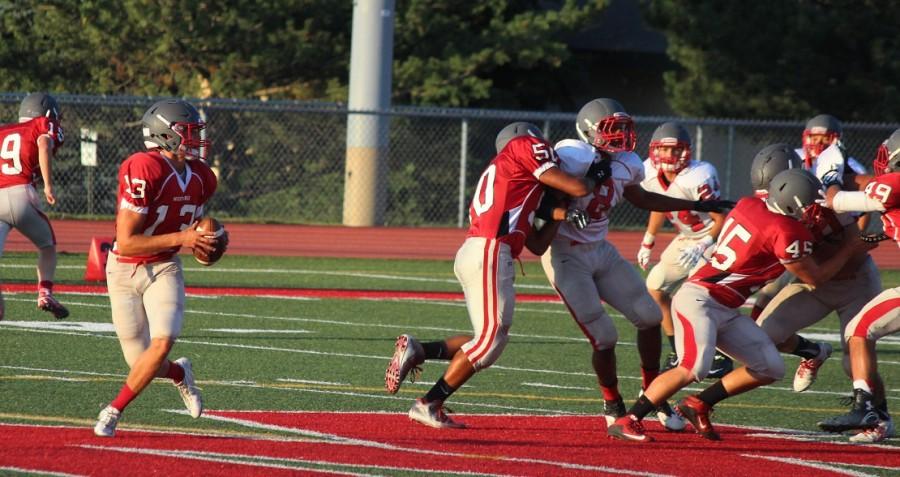 The annual Red/Gray scrimmage fell on a balmy Friday night in August, the sun setting as the clock ran down on the game. Before the raucous crowd of “Red Ragers” could dissipate, the air was cut by first year Mundelein coach Larry Calhoun’s voice calling out to them to remain in the stands.

The confusion was short lived, as senior student leaders began the off key melody of the school’s song. Varsity players gathered on the track in front of the bleachers and sang with the crowd, Calhoun’s ball cap barely visible in the middle of the gathering pack.

“It’s not a bad culture,” said Calhoun of the school’s empathy toward the football program’s struggles.

Taking hold of the reigns of a football team’s endeavor for the success it has been missing is a cliche plot point for almost every high school sports movie in Hollywood.

The script writes itself; the town has long since accepted the fact that football is not our sport, to no fault of our own. Through unfortunate circumstances like low morale, low participation and so on, Mundelein just is not the all-American football school.

“We have a lot of good freshmen, 56 on the roster,” said Calhoun, “but the [upperclassmen] lost a real core. We have to build a new culture to raise numbers.”

That new culture already has cogs moving within the locker room, something with which Calhoun does not credit himself. His motto has laid the responsibility of culture change on the team, realizing it is not something he can create himself.

“Coach Calhoun has changed the mentality of the team with the motto ‘We can. We will,’” said senior quarterback Colten Fisher. “Focus and toughness is something that has been emphasized by him and the new coaching staff. He has brought up the morale of the team, and because of that, the team is going into the first game with confidence.”

While this isn’t exactly Friday Night Lights, that doesn’t mean Mundelein won’t get a storybook ending.

“Coach Calhoun has done wonders for this team and program,” said junior Shane Kosmach, “creating a very close bond between all players and coaches, bringing a play scheme that should put us ahead of our opponents and supporting the players even when they may not deserve it because we are all part of this family.”

The varsity scrimmage ended in a 14-7 victory for the Red team, but the positives seen by coaches in the team’s aggressiveness on both sides of the ball and the active ability to find pockets show strength and excite fans for the beginning of the 2015 season.