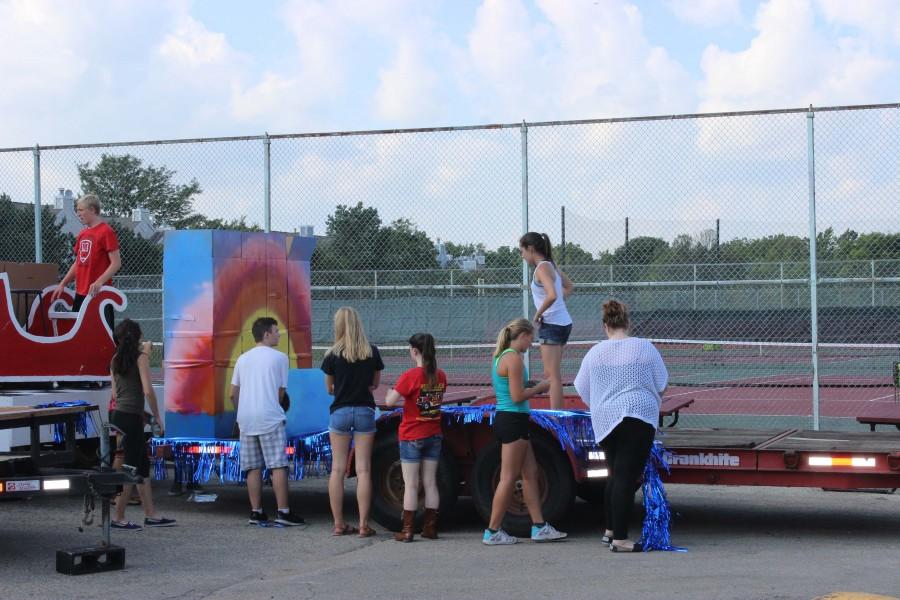 As per tradition, Student Leadership will be building a separate float for each grade level in honor of the upcoming Homecoming parade.  Each float will represent a scene from “Grease,” the movie, which has inspired this year’s Homecoming theme.

The Senior Class will be building a float inspired by the 1950s diner, the Frosty Palace, that Sandy and Danny went to throughout the movie.

Pacis explained that there have been a few difficulties for the senior class while building the float, such as getting students to come out and help build, but the experience will be worth it in the end.

“I think the most rewarding [aspect of the float building] is going to be seeing the finished product and seeing the float in the parade,” said Pacis.

The freshmen class will not be building a float this year, due to the lack of participation they received from the freshmen class last year. Since only one freshman showed up last year to build the class float, the responsibility was left to the School-Wide President and to some of the upperclassmen. This was a situation Student Leadership wanted to avoid happening this year.

“The challenge was that we didn’t have enough freshmen involved [in Student Leadership] yet so early in the year, and since homecoming float building begins two weeks before the actual event, we knew we wouldn’t have enough people to help build,” said Julie Block, math teacher and freshman class adviser.

Besides freshmen, each Student Leadership member is encouraged to help build their class’s float throughout Homecoming week, and those who are not already involved in another organization’s float are encouraged to be on the float with the club.

The sophomore class float will be a carnival theme, similar to the carnival that the characters in ‘Grease’ attend at the end of the movie.

“We’re putting a little Ferris wheel [on the float]. We’re thinking about a cotton candy machine, [and] maybe a pie-in-the-face booth with some teachers in it,” said Ricky Rodriguez, the Sophomore Class President.

A budget of around $200-250, though, will determine which props the group is able to actually have from their ideal plan.

“We need to buy a couple more things. Some of the materials aren’t the best, [such as the] little pipes we’re using for the Ferris wheel [that] don’t look very good,” Rodriguez explained. “We could definitely use a better budget.”

Despite the financial challenges, Rodriguez said he knows the work is worth it when “[we see] kids on the sides of the streets smiling and catching the candy.”

The junior class will be building their float with the opening beach scene and the song “Summer Lovin’” in mind.

Junior Class President Adriana Feijoo said they will be “putting a kiddie pool, sand, and a boom box that will be playing ‘Summer Lovin’’ on the float.”

Feijoo also said the Junior Class hopes their float idea will be “funny and interactive” for the parade’s onlookers.

This class, too, has experienced some difficulties in the float-building process.

“Participation is often really low [due to] sports,” said Feijoo. “When you only have 5 people [working on one float], it takes forever.”

She also mentioned it’s hard to finish in time for the parade but that the junior class has the goal of having the best float in Student Leadership in order to “get bragging rights” within the club.

Each float will be showcased in the Homecoming parade on Fri., Sept. at 3:30 p.m. The route of the parade will be down Division Street this year, due to construction on Hawley.