Coming in October: The Best Season has Finally Arrived 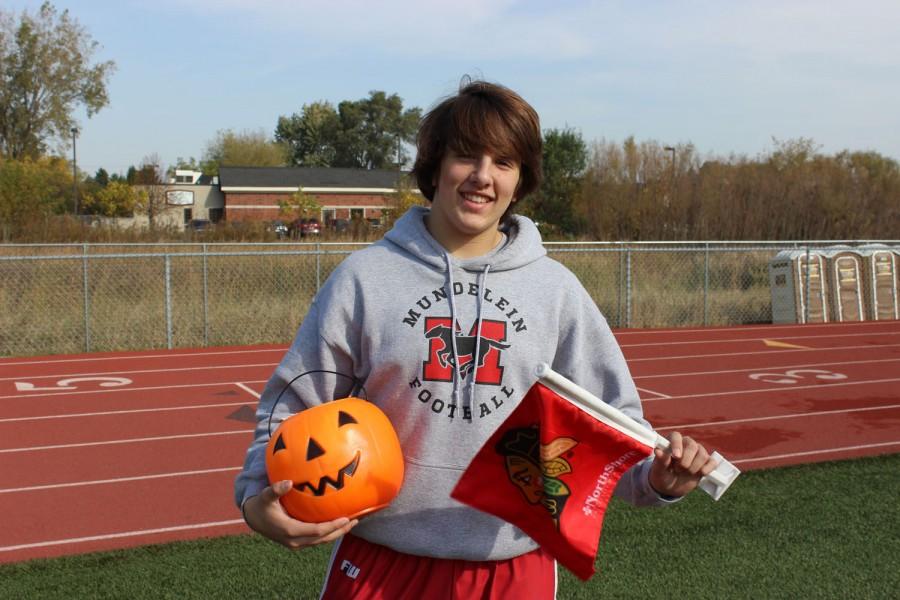 Junior Alex Loding stands with items that represent his reasons for why he loves fall.

You walk outside and feel the chill breeze nip at your face. You notice a red leaf float peacefully to the ground and land in a pile. It is definitely fall.

The leaves change colors and fall to the ground; the temperature begins to drop. Warm drinks are sold at Dunkin’ Donuts and Starbucks. Pumpkins sit outside homes, and the best movies are shown on TV. New sports seasons begin while others provide champions, and Halloween lurks right around the corner with children roaming the stores in search of a costume and candy.

As a football player, I find the best part of the season to be the sports. Football and baseball are two of America’s favorite past times, and fall is perfect football/ baseball weather.

Football season is almost in full swing even though the Bears are off to a rough start, and the MLB playoffs begins in the second week of October with the month ending with the World Series. Let’s go Cubbies!

Around the start of the MLB playoffs is when more of the fun begins. Hockey season started Oct. 7 with the Chicago Blackhawks opening against the New York Rangers. Chicago is ready to have the Stanley cup champs back in action.

And better than all the sports craziness of October is the fact that four days after the start of the basketball season, which begins with the Chicago Bulls hosting the Cleveland Cavaliers on Oct. 27, it’s Halloween!

Although sports provide the sweetness early in the month, Halloween provides the treats, and some tricks, at the end.

Candy fills the shelves while costumes fly off them, and families carve pumpkins together.

Also, no one is ever too old for running around the neighborhood dressed up in his or her favorite costume. Running around in my costume–whether it was a Power Ranger, an M&M, a pirate, or whatever I was that year– has definitely provided some of my favorite holiday memories with family and friends.

And it’s the Halloween movies that provide the tricks, the shivers and the screams. The TV channels become littered with the horror classics, such as “Nightmare on Elm Street,” “Friday the 13th,” “Insidious” and “Sinister.”

There is also the ABC Family’s Thirteen Nights of Halloween, which airs the more family-friendly movies, such as “Halloweentown,” “Hocus Pocus” and “Casper the Friendly Ghost.” Whatever it is you are watching on TV, Halloween provides the best movies during the best time of year.

And what makes these events even more enjoyable is the wardrobe that can be worn during all of it. The chilly fall air forces the sweatshirts and the hoodies out of the closet.  It’s the time of year to be comfortable while staying warm, which is why fall can be referred to as “sweater weather.” And really, who doesn’t want to wear sweatpants and/or a hoodie to school every day?

Fall is jam-packed with a variety of activities throughout the season. Sports are on every day, school is in full swing, fan-favorite movies are premiered, the best pies and drinks are sold, candy, costumes and movies highlight Halloween, and that’s just skimming the surface as to why fall is the best time of the year.

What’s your reason for making the most of this season?