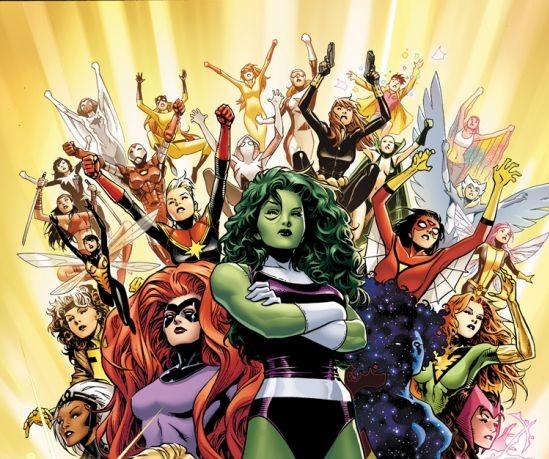 Nowadays superheros are a huge part of pop culture. Marvel, being one of the forerunners in production of superhero materials, has exerted its fair share of sexism in their movies. Because of how big a company like Marvel is, they have the ability to represent more powerful female leads, yet fail to do so.

“Young girls should have realistic role models, and the only ones in Marvel [movies] are [the] Scarlet Witch and Black Widow,” said Leah Goldman, junior. “Although they are cool, it’s upsetting that a girl can’t choose a quality hero like young boys can with the large amount of representation male superheros have.”

Not that every movie released is blatantly sexist, yet according to entertainment website ScreenRant, “[Marvel has] 16 films starring men released or in development (not including team-ups) to just a single film with a female lead [Captain Marvel].”

The Captain Marvel movie is important for Marvel because it’s its first female-driven superhero movie. This movie will hopefully be used as a segway to more female-inclusive movies and comics that see women as equals and not just objects.

Within team-up movies, such as the Avengers, Marvel has received criticism over how female characters are portrayed. In these movies, there is always the “token” female character, there to widen the demographic, yet often times falling flat because of oversexualization.

“I am upset that the only few character representation of females is sexualized in unrealistic ways when most of the characters in comics are supposed to be teenagers,” said Goldman.

For example, in “Avengers: Age of Ultron,” fan-favorite female hero Black Widow got involved in a controversial romantic relationship with the Hulk. Often times in movies with one major female lead, she ends up in a relationship with one of the male counterparts; this is controversial because female characters are worth more than their relationship, and they don’t need to be represented in that kind of way.

Angry fans took to Twitter to vent their frustration at director Joss Whedon after his portrayal of Black Widow in the Avengers.

Because of this instance, comedian Patton Oswolt tweeted, “There is a “Tea Party” equivalent of progressivism/liberalism. And they just chased Joss Whedon off Twitter.”

Oswolt, along with some other fans, blamed ‘rabid feminists’ for his departure, yet Joss Whedon refrained from commenting.

The fact that people are mad about others pointing out sexism and misogyny in the media is alarming. It’s things like these that add to the underlying sexism that is ingrained into society.

Not only are female superheros not appearing in lead roles, they’re also being degraded when featured alongside male counterparts.

Marvel is not all bad, though, especially in recent times. The company has begun printing new female superheroes in comics, such as A-Force. A-Force features an all-female Avengers; the first time this has been done.

Marvel’s idea for its writers was to try and get a diverse array of characters; the only requirement was that the characters needed to be all female.

This is not a permanent fix for sexism in the superhero industry, but it is a start to abolishing mistreatment of female characters within comic books and hopefully movies.