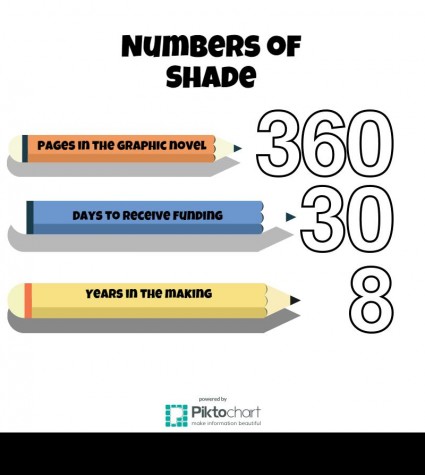 MHS alum of 2003, Nathan Heigert, is all set to debut his first graphic novel “Shade”. This project was eight years in the making and has finally come together thanks to funding from donors on the website Kick starter.

“The project began for me in a high school earth science class when the teacher gave out a creative assignment: describe a fictional planet and tell the class about it,” said Heigert.

Inspiration for the concept of his graphic novel sprouted from the then newly-released “Star Wars Episode I: The Phantom Menace” which was released in 1999.

“Shade” takes place on a desert planet called Dañub, where the main characters are inhabitants “intent on leaving the ‘hot’ side, where they were stranded, to the ‘shaded’ far side of their world,” said Heigert.

These voyagers are set on escaping the harsh environment of a once lush planet and finding a rumored paradise.

Heigert’s writing process took a unique approach, he said: “I’m definitely an artist first and a writer second, so I’ve always been a stronger story teller through my art.”

Having a passion for art and writing from a young age helped this product come to life.

Heigert spent three years sketching and painting before even writing a single word for this story, which helped him refine his ideas the same way concept artists do when writing films.

Through an education at Washington University in St. Louis, Heigert was able to enhance his art abilities by partaking in an art and films program there.

Regarding his class experience at college, Heigert stated, “Both programs allowed me to develop my skills in illustration and storytelling, respectively, substantially.”

Heigert admires many artists, Jeff Smith, comic writer of “Bone”, is one in particular. Along with comic writers, Heigert has been directly inspired by fantasy films, such as “Lord of the Rings”, “Gladiator” and “Braveheart”. He commended their use of world-building, which he found fascinating.

His creation took eight years of work and 30 days of funding to produce a graphic novel with 360 pages.

Using Kick starter, a website that allows for crowdfunding of creative projects, Heigert was able to raise more than his $20,000 goal for this production. His close friends had a huge role in the early stages of funding, and as time went on, Heigert came up with some creative promotions to gain backers.

He and his fiancée worked together to think of what would keep people interested, including “silly stuff like drawing little Donald Trumps and filming [their] dog doing tricks,” Heigert said.

Now that the product is finished and the campaigning is through, eager readers will just have to wait for this graphic novel to hit the shelves in June of 2016.

Pictured above are strips featured in ‘Shade’