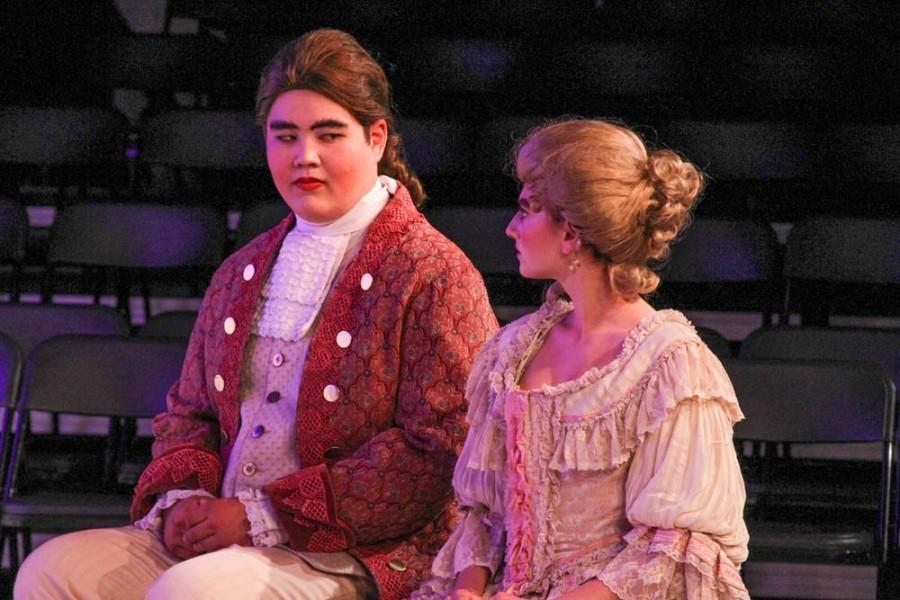 “Tartuffe” is a play that takes place in the 1660s, and while the time period might make a teenage audience think this is a formal production not worth seeing, it actually is a comedy with entertaining dialogue that appealed to the crowd when the school theater department performed it Nov. 19-21 in the MHS auditorium.

“‘Tartuffe’ was hilarious to watch, and it highlighted some very important lessons, such as the value of family and being able to look past your initial impression of a person,” said audience member Anna Balla, junior.

“Tartuffe” is about a family who hosts a guest named Tartuffe in their household. The family is not very fond of Tartuffe, except for the father, Orgon. Orgon wants his daughter, Mariana, to marry Tartuffe, but she has already fallen for the love of her life, a man named Valère.

This situation causes the family to show Orgon the type of man Tartuffe really is—a man full of lies and hypocrisy who has actually fallen in love with Orgon’s wife, Elmire, who also makes derogatory remarks about Orgon.

Because of the period setting, the cast had some unusual aspects to this production.

For one, they had to get into costume with big hair, heavy makeup and huge, fluffy clothes.

“Our costumes themselves weigh about 25 pounds, and the corsets are just like they would have worn back then,” said Karsen Sample, senior, who played Elmire.

Despite the elaborate costumes, the setting was fairly simple with a white backdrop, a white fireplace and a fancy table with some cushioned couches surrounding it.

This set design made it possible for a special stage configuration known as “thrust spacing.”

Thrust spacing is “when the audience is on three sides of the stage, and the audience actually sits right up on the stage,” said Jenna Panos, junior, who was the assistant stage manager.

Additionally, the whole play is supposed to read as one long poem, as this play was written in verse. In theatre terminology, verse simply means that every line in the play is in a rhyme pattern.

“Each line in “Tartuffe” has eight syllables, and it rhymes with the line following it,” said Thomas Ferro, junior, who played Orgon.

An example from the play of this would be, “Christ, must I cram it in your ears? Or yell at you for fifty years?”

This gives the play its character. It seems as if the cast had to get over a big obstacle with all of the lines rhyming with each other.

“The actors had to learn how to not make it seem like one big poem and make sure that it sounds normal, which they did a great job doing,” said Panos.

And they truly did, as it sounded very natural and not like a recitation of a poem. Instead, the actors seemed to enjoy the script by making it come alive while staying in flow with one another.

But some cast members admitted that doing the play was quite difficult because of the style of writing from this particular era.

“The language and style of movement was really different than it is today, so we had to analyze the text, so we knew exactly what we were saying,” said Sample.

But experience with this kind of work is why Director Jonathan Meier chose it.

“Moliere [the writer of the original play] is the most significant writer of the late seventeenth century, so exposing the students and the community to his work is important,” he said.

Overall, this play was quite exquisite, and the cast members did an amazing job giving the audience a feel for the era of the play’s plot. I have never been to a play where the audience laughed so much.