From Traditional to Technological: The Evolution of Journalism 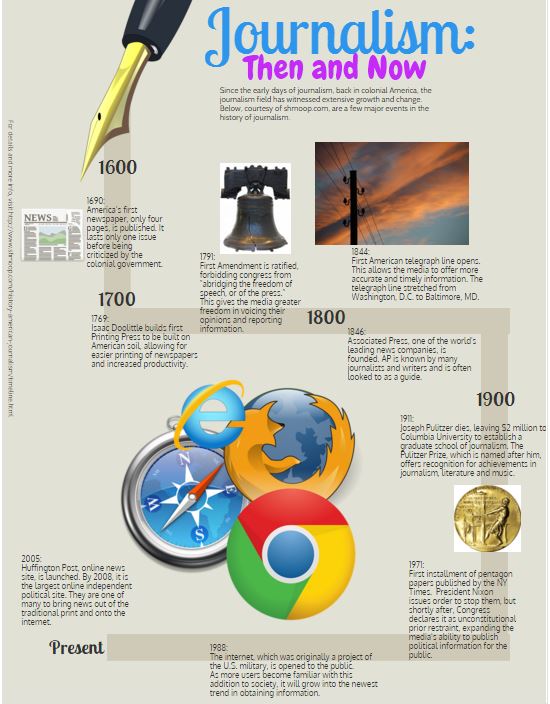 Whether large or small, national or school-based, journalists embrace the task of providing news and relevant information to those interested. Although in the professional sector they don’t exactly make six figures, many still see value in pursuing such a fast-paced career.

Part of this continuous growth is due to the evolution of how information is collected, cultured and communicated to the public. Advancements in technology, along with evolving public interests, have led journalists to adapt new strategies in order to retain the public’s interests and keep up with the rapidly changing ways of communication.

“One of the great things about the digital evolution of journalism is that it has opened up niche and specialist publishing,” said Ross Hawkes, senior journalism lecturer at Stafford University, in an online article from The Guardian published Nov. 19, 2012.

Niche journalism includes work created for a specific audience, like novelists or business owners, just to name a few.

MHS Literacy Center Specialist Hope Babowice is among those who partake in this field. Her column in the Daily Herald, published twice a month, answers thought-provoking questions submitted by local “young readers”.

Recounting the changes that have occurred since she first began her column, Babowice sees a significant difference in how interviews and information are collected.

“When I was initially working twenty years ago, many of the interviews would be face-to-face or by phone; now it’s very rare that I pick up the phone. It’s almost 100 percent email.”

Due to its ease and convenience, technology has greatly reduced the amount of effort and time needed in order to reach out to sources and transmit information, compared to the traditional way of conducting interviews. Another result of such advancements is a decrease in the need for in-person journalists.

“As for actual newspaper writing, the staffs are getting smaller and smaller,” said Babowice.

Former Chicago Tribune reporter Lisa Black knows first-hand of the decrease in newspaper staff. In November, the Chicago Tribune saw a multitude of reporters leave as the company cut costs and downsized, Black being one of those affected.

“The most significant change in journalism has been – and continues to be – the popularity of the Internet,” Black said in an email. “Technology has helped reporters gather information more quickly and gain much larger audiences, but it has also destroyed the old business model that allowed newspapers to be profitable and competitive in the marketplace.”

As Babowice mentioned earlier, the transition from displaying news and information in print to broadcasting it online has made it difficult for print news sources to be as profitable as they once were, lowering the average pay rate for those in this career.

According to Daily Herald reporter Pam Ebert, who has been in the journalism field for thirty years, change has always been “imminent” in the newspaper business. As time progresses and news changes formats, it is to be expected that the journalism field changes, too. However, although there appears to be a few economical reasons to choose this career path, Ebert provides a few insightful words that really bring home the importance of jobs like this.

“Journalism is an honorable profession because, without a free press, we would not have a strong democracy,” she said in an email. “I believe that is why most people get into journalism, no matter what role they play. Knowledge is power, and people have a right to know.”

There is, of course, much good that comes from the changes that are occurring in the journalism field. Although there is a decline in writing and reporting for print, this career path is moving to a format that allows for new creativity and learning: the internet.

“Journalism extends far beyond print newspaper. There are many online sources like Huffington Post,” said Babowice. “All of the newspapers have an online format that requires somebody with an expertise in online formatting or online journalism.”

Online sources have been on the rise among the public, but this shift from print to online has paved a way for those with computer interests or experience to add their skills to the journalism field. Not only will future journalists be knowledgeable in reporting and distributing information but also in online design and layout, further advancing the spread of online media, which is significantly more convenient and accessible.

“I think every job has a communication or journalism component, so these are strengths you can bring to any job,” said Babowice.

Besides the academic advancements which work in the journalism field provides, there is also the personal impact. Journalism allows for greater involvement in society, broadening one’s outlook and even exposing ideas and concepts that shape or alter the way we see the world.

“[This] career has given me the knowledge to know there is more than one side of an issue and that those on opposite sides are equally passionate about their beliefs,” said Ebert. “It’s made me a person who questions more and a person who doesn’t take many things at face value. As they say, there is always more to the story.”

While there are a series of factors one must consider if choosing a career in journalism, it is worthwhile to keep in mind that pursuing further education in this field will not only prepare a person solely for newspaper reporting or magazine writing but also for any other career in the communications field.

Said Babowice, “A background in journalism means you know how to research and you know how to put together a logical argument, so that’s an obvious lead into the law or any business leader or leadership type role. That will prepare you well for it.”